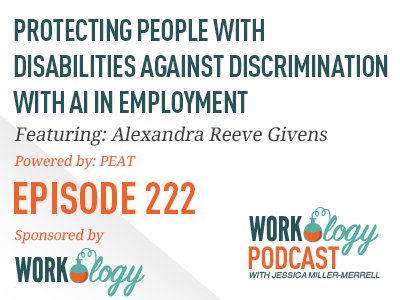 As the adoption of artificial intelligence in our workplaces increases so do conversations around AI and discrimination. Probably the best-known case study is from Amazon who developed its own AI candidate matching tool for technical positions. The company abandoned this tech after determining it was matching candidates to positions who had male names, went to male universities and specific work experiences. Over the last several years as the adoption of AI in HR and recruiting has increased, I’ve been doing my own research on how this is and can impacting our workplaces from our hiring to training, to other employee engagement activities.

Episode 222: Protecting People with Disabilities Against Discrimination with AI in Employment with Alexandra Reeve Givens (@AlexReeveGivens)

This episode of the Workology Podcast is part of our Future of Work series powered by PEAT, the Partnership on Employment & Accessible Technology. In honor of the upcoming 30th anniversary of the Americans with Disabilities Act this July, we’re investigating what the next 30 years will look like for people with disabilities at work, and the potential of emerging technologies to make workplaces more inclusive and accessible. Today, I’m joined by Alexandra Reeve Givens.

Alexandra Reeve Givens is the founding Executive Director of the Institute for Technology Law & Policy at Georgetown Law, which operates as a think tank working on cutting edge issues in technology law. She previously served as Chief Counsel for IP and Antitrust to the Senate Committee on the Judiciary and to its Chairman/Ranking Member, Senator Patrick Leahy (D-Vt.). She began her legal career as a litigator at Cravath, Swaine & Moore in New York City. Alexandra is also the daughter of the actor Christopher Reeve, who experienced a life-changing spinal cord injury in the 1990s. She serves as a Vice Chair of the Reeve Foundation, which supports people living with all forms of paralysis.

Does AI Discrimination Against Hiring and Employment of People with Disabilities?

I asked Alex this question because there is artificial intelligence in human resources, recruiting and employment is still so very new. For many employers who are considering AI in their offices and among their employees, Alex says that it really depends. AI is designed to look at patterns and make recommendations based on this information so if a candidate doesn’t match the pattern, there is potential for discrimination. The Amazon case is a great example of how AI can create barriers to employment for all protected classes including people with disabilities. In this podcast interview, Alex talks in great deal about the conscious or unconscious bias that is present in the employment process right now not to mention the risk that AI also brings.

Alex says that employers are analyzing video, and she says they are looking at your facial movements and the tone of voice that you use. She says that there are also tools that have candidates play certain games or puzzles online, and they analyze how people engage with the test as they’re doing it. So, yes, there are technologies that might not be doing it purposely but discrimination is happening with artificial intelligence.

A Look at Employment Law, Protected Classes, and AI

As we mentioned at the beginning of the podcast, Alex is also a lawyer and provided us in this episode a look at how employment law is being shaped right now as a result of artificial intelligence and where it comes into play. One area that Alex goes into detail about is the EEOC. She says the Equal Employment Opportunity Commission’s 1978 guidance on employee selection procedures, alludes to the four fifths rule. The four fifths rule creates a presumption or not of disparate impact. She says the EEOC is pointing to a piece of the 1978 guidelines from the EEOC to say run a statistical analysis. If one group is being screened out or not making it through at 80 percent or less of the dominant group. AI impacted by the four fifths rule. She says the approach might work for traditional gender categories. You can take sample set, see who is identified as a female and who is identified as a male, and compare how the women in the sample set are doing to the men. However, this isn’t a standard practice for people with disabilities. She urges us to consider how we should think about that for disability according to the EEOC.

In this interview, Alex discusses different areas and in greater depth. If you are looking for a primer on AI and employment law, this is the podcast episode for you to listen to.

Alex’s insights are invaluable for HR leaders and I appreciate her expertise as a lawyer with a personal story and passion for helping to educate the public on the likelihood of AI causing discrimination for protected classes and under-represented groups including people with disabilities. It’s imperative for HR leaders to be aware and informed on these types of conversations, research and as well as current employment law and protections.

The future of work series in partnership with PEAT is one of my favorites. Thank you to PEAT as well as our podcast sponsor Workology.