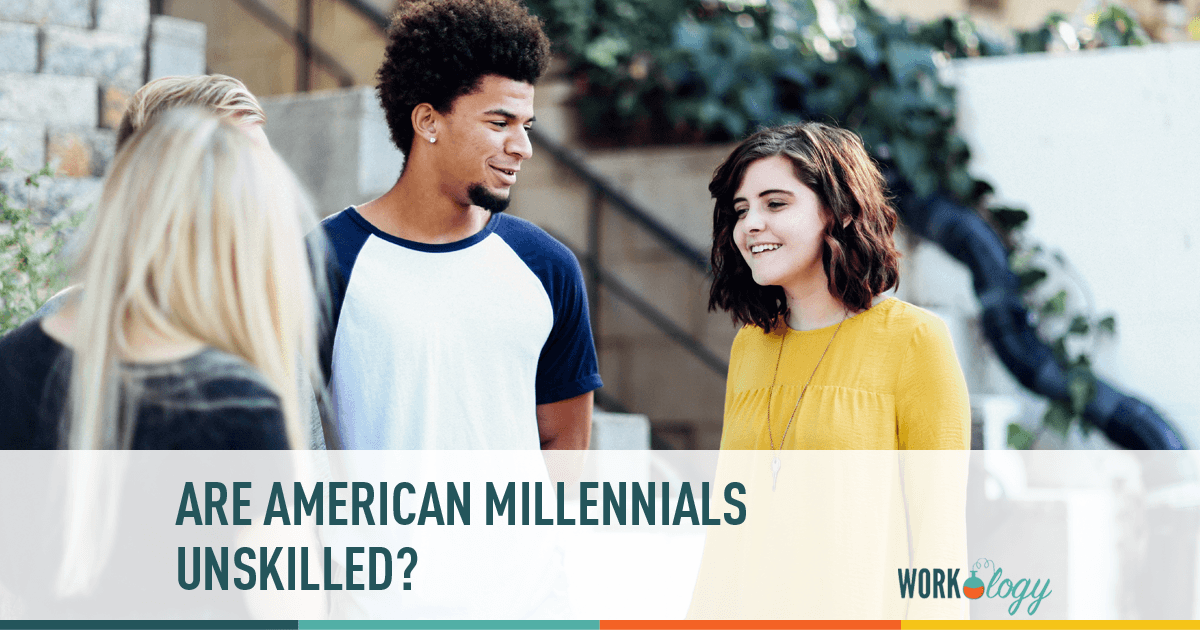 Well, no. Not exactly. But according to a new study, when compared to international millennials and even other American demographics, American millennials come up short in basic skills. That is not to say that millennials are uneducated or lack relevant job skills, but rather that they are, apparently, lacking in fundamentals.

According to the Education Testing Service, who looked at Americans aged 16-34,

“despite having the highest levels of educational attainment of any previous American generation, these young adults on average demonstrate relatively weak skills in literacy, numeracy, and problem solving in technology-rich environments compared to their international peers. These findings hold true when looking at millennials overall, our best performing and most educated, those who are native born, and those from the highest socioeconomic background. Equally troubling is that these findings represent a decrease in literacy and numeracy skills for U.S. adults when compared with results from previous adult surveys.”

Literacy, numeracy and problem solving in technology-rich environments are all important skills for employers but how worried should employers, workers and policy-makers really be? I would argue, at least in the immediate sense: not much, not much and a lot. Can’t problem solve in a technology-rich environment? These candidates will wash out during probation (if they even make it that far). Increasingly complex application processes and social recruiting ably screen out candidates who lack basic skills and a healthy talent pipeline that makes use of international recruitment can do much to fill gaps in a workforce.

Already working millennials needn’t worry about this new way in which they apparently don’t measure up either – five or ten years into your career you’ve ironed out your problems with arithmetic or moved into a job where that weakness is less significant. Too, the average millennial may be lacking in basic skills but no individual person is the average subject of a broad study. The most significant employment and advancement barriers millennials face aren’t basic skills, but rather higher level skills mismatches, low wages, a major and ongoing shift in labour force dynamics and other socioeconomic factors that are beyond the scope of the ETS study and of individual millennials to address.

The bigger problem is for policy-makers. If ETS is right that American millennials are lacking in literacy, numeracy and problem solving skills, the fault lies not with millennials themselves but with the American education system. The longer this paucity of basic skills continues, the less likely will American youth be able to achieve those degrees, certificates and other credentials that ETS says are currently offsetting a lack of basic skills. The continued inattention to core competencies could reach critical levels which they aren’t at now – the ETS study doesn’t say the young American workforce is in crisis, only that it is worse off in comparison – but that is not a trend anyone would like to see continue or deepen.

That is, although individual millennials shouldn’t worry about this broad social trend, American policy makers should be worried about a decline in basic skills because it has implications for relative productivity and the ability of the workforce as a whole to meet future challenges.

While the ETS study points to an alarming trend in American education (or the lack thereof), it also contributes, probably unintentionally, to the media’s Millennial Monster. Are “Americans aged 16-34” a recognizable group of people who share defining characteristics, traits and experiences? That’s a rather broad group to study, let alone to characterize.

A recent New York Times piece asked, What Happens When Millennials Run the Workplace?, as though millennials were interchangeable without reference to class, race, sex or even age. As though millennials had a recognizable and well known character – young, disruptive, casual, innovative, lacking respect for traditional authority – but this is a character which has been invented by media, not something which is substantiated by demographic studies.

What Happens When Young People Become Successful Entrepreneurs? What Happens When Technology Removes Barriers to Advancement? What Happens When Boom Industries Promote Young By Necessity? When we talk about “millennial leadership” in media and tech, we aren’t talking about a singular generation of very special people, but about changing socioeconomic dynamics that drive youth success; a whole host of factors that create and nurture industries where people achieve senior leadership positions at a young age. Or don’t.

Back in November of 2015, Citi Foundation released a study of global millennials. They found that the biggest difference between millennials and other age groups was economic situation and financial position: in other words, money and access to making money. As Laurie Penny points out in the New Statesman “[t]his generational conversation is, of course, deeply middle class. The most middle-class thing about it is the way it tries to avoid the fact that it’s all about the existential angst of being middle class.” Anxiety about millennials in the workplace, millennial success and failure and general weirdness is measured by distance from middle class success – how much do the lives of millennials look like the lives of Gen X and Baby Boomers before them? Points of divergence are points of anxiety.

Millennial has become a nonsense word, one that masks rather than reveals important information. Break that ETS study down and there is so much to learn about who is being given chances to succeed in America and who is not. Employers don’t need a millennial recruitment strategy and the country doesn’t need a millennial education strategy. We need strategies and policies for people and we need to do really dig into the data to do that. Are American millennials unskilled? Yes and no and everything complicated in between.