3 Important HR and Business Issues in the Second Presidential Debate 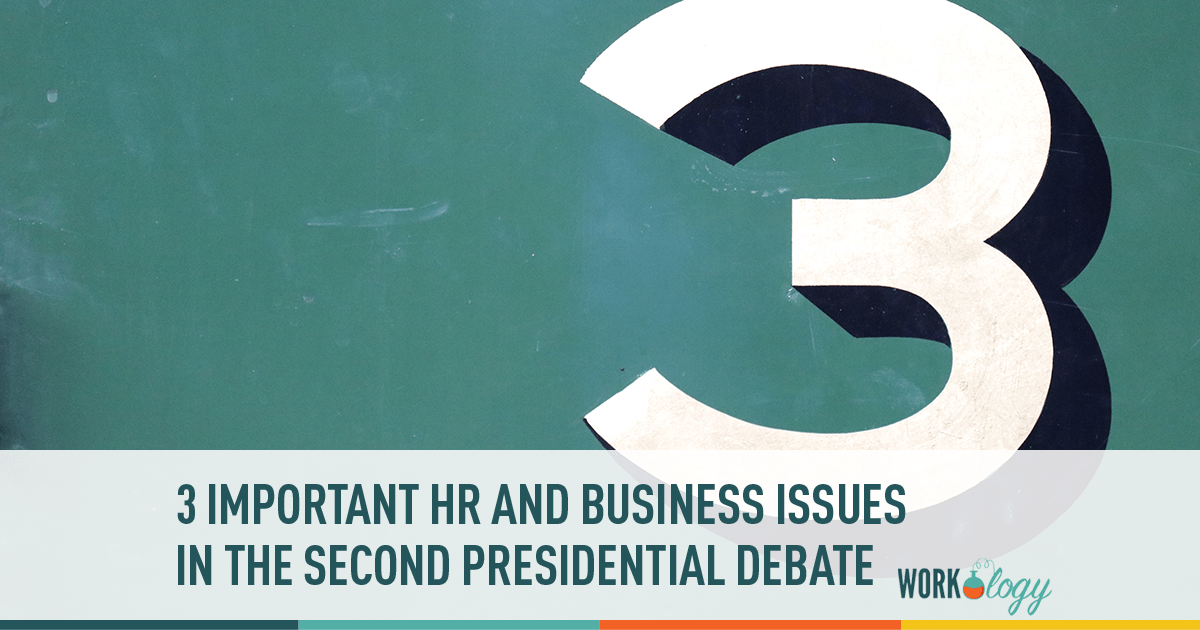 Donald Trump’s performance — playing to his base with claims that Hilary Clinton should be in jail; promising to assign a special prosecutor to “look into her situation” should he win; dodging questions from the moderators about his most recent sex scandal; avoiding any substantive explanation of his policies — is unlikely to have moved anyone to his side. Trump tried to dominate the conversation and keep Clinton on the defensive, focusing on her State Department email scandal and her husband’s legal troubles, and protesting moderator attempts to keep him on track.

This, I think, was part strategy and part defensiveness. Keeping attention on Clinton’s “failings” should make him look better, right? But the problem for Trump now, as this campaign winds down, is that the largest bloc of undecided voters is suburban women. Although Clinton at times struggled to keep up with Trump’s rapid-fire accusations and shifts of topic, she clearly and calmly articulated her policy positions despite verbal and even physical intimidation. This combination of substance and grit should play well with the undecided voters this debate was meant to reach. An experienced, older woman, keeping her cool while a man interrupts and insults her and her contributions — the debate was an awful miniature of aggressions all women (and other marginalized people) have faced at work.

After the first debate we spent a lot of time talking about how many times the candidates interrupted each other and the moderator. After this debate, we’ll be talking a lot about Trump’s physical presence. Twitter users watching the debate live pointed to how he tried to physically dominate the space, by pacing behind her. Maybe this works in sports, but in the tight space of this town hall it had the effect of making him look nervous and aggressive. Some compared him to the wave of creepy clown pranks that’s currently sweeping the country.

Clown jokes aside, who won the debate? As usual media polls vary and pundits are split between the two candidates. Some argue that Trump was able to dominate the physical and auditory space of the debate and avoid commenting on his recent troubles. Others point out that regardless of how much attention he commanded during the debate, he distanced himself from his running mate, Mike Pence, on Syria, and has been losing support of leading Republicans in droves. So does that mean Hilary Clinton won? Pollster Frank Lutz watched the debate with a group of undecided voters and their consensus was that she did, soundly. And 538, which updates its election forecast daily, predicts that Clinton has an 82.5% chance of winning.

But who performed best at the debate is less important at this point than who moved the most undecided voters, and to get at that, we need to discuss more than dynamics — we need to talk about the issues.

After the last debate, I said that I would be keeping track of some key HR and business issues that are at stake in this Presidential campaign. Tracking how they are discussed during debates and key speeches can be difficult — because Trump dodges and Clinton points to her site for more info — but I think is worthwhile. Of course their campaign websites have (more or less) full and detailed plans for all of these issues, but watching how the candidates respond to questions about immigration, healthcare and taxes helps to reveal both how well they understand the issues and what they really think about them. Let’s dig in.

One of the most important issues in this election is healthcare reform. Pushing through the Affordable Care Act was gruelling for Congress, the Senate and the President, and implementing its changes in the private sector has been a long and complicated process for healthcare providers, insurers and employers. The Affordable Care Act has been a game changer for many previously uninsured Americans, but it is also deeply flawed and has caused complications for ordinary people and employers alike. The two candidates’ approaches couldn’t be more different.

Clinton has a detailed plan available on her website but this debate was interesting for how ably she defended it. She praised the AAC for for what it accomplished and said that should she be elected she would do even more. As she put it last night, the challenge now is to save what works, but get costs down and quality up. She wants to help to small businesses better handle the burden of implementation and management — in an employer-based insurance system, she said, we can’t afford to ignore either people or employers. Her plan outlines some specifics on how she can do both, including incentives for insurers, bringing down the cost of copays, and raising taxes on the wealthy so that they can make positive changes for workers without increasing the burden on business. That is, her healthcare plan — including insurance and leave — would be, at least in part, taxpayer, not business funded.

Trump doesn’t have a healthcare plan on his site and he didn’t really dig into the issue last night. However, when pressed on the issue he explained that he would scrap the AAC, or Obamacare, and start over. “Obamacare is a disaster,” he said. “You know it, we all it. Obamacare will never work, it’s very bad health insurance and far too expensive both for people who have it and for our country.” A key part of Trump’s healthcare strategy is introducing more competition between insurers. “Getting rid of lines” between states, he says, will help to break down insurer monopolies and bring down costs. He said that his healthcare plan would do this while allowing people to keep their preexisting coverage. (He went on to call the Canadian healthcare system disastrous and claim that Canadians travel to the US for care. Vox fact-checked this point — only a tiny percentage of Canadians travel south for healthcare.) It’s clear that Trump believes a single-payer system would be disastrous for the United States, but it’s unclear just what his plan is or what impact it would have on business.

Immigration is an incredibly important issue for business and one that HR in particular is intimately concerned with. It remains a key driver for economic growth and technological development and immigrants — both authorized and otherwise — make up a significant portion of the US labour force. As with healthcare, Clinton and Trump’s positions on immigration couldn’t be more different.

When asked about his plans to reform immigration, Trump once again called the system broken and said that extreme vetting was the only thing that could fix. He said he was “very worried about illegal immigrants” who he again called murderers and “very bad people.” When pressed on what extreme vetting would look like and why he thought it was necessary, he could only say that he was worried about drugs coming over the border and was Clinton’s plan to bring in more Syrian refugees. Per his campaign site, the border wall is still a key part of his immigration plan. The efficacy of a border wall has been debunked over and over, as has the usefulness of his extreme vetting plan. But while his plan may be legal, it won’t be good for business — like protectionism, limiting immigration makes it harder for business and the economy to grow.

Clinton mainly responded to Trump regarding her plan to bring in more Syrian refugees, which she framed as a matter of conscience. But although she didn’t expound on her immigration plan last night, it’s well known by this point in the campaign. Clinton’s policies regarding immigration reform fall very much in line with President Obama’s; she will defend DACA and DAPA and “introduce comprehensive immigration reform with a pathway to full and equal citizenship.”

In my coverage of the last debate, I talked briefly about the candidates’ stance on taxes. This time, we were lucky to have both Donald Trump and Hillary Clinton discuss their plans in more detail. Both candidates link taxation to other hot button economic issues in the campaign: job creation and economic growth.

As in the first debate, Trump said that he would institute the “biggest tax cut since Reagan,” in order to provide relief to ordinary Americans. He also said that taxes (and regulations) have been an undue burden on American business, spurring them to flee for countries with lower tax rates. This is how he explicitly links corporate taxes to job growth, arguing that lower taxes for corporations will lead to more jobs created on American soil. Specifically he wants to lower the top marginal tax rate from 35% (39.1% with the combined state rate) to 15%. That particular rate is the third highest in the world, but is not representative of the corporate tax system as a whole — the average rate is closer to 12%.

Clinton, on the other hand, said that she will raise taxes on the rich by implementing the Buffet rule — a 30% tax rate on those making more than $1 million a year — and close corporate tax loopholes. Rather than raise taxes across the board, she said, she wants to make it harder for corporations and wealthy individuals to get unfair tax breaks. She emphasized “unfair” and “unjust” in this part of her comments, probably trying to strike a balance between being business friendly and fighting for ordinary Americans. Her site provides more details of her plan to reform the tax code, including making it easier and cheaper for small businesses to comply with federal tax rules.

Last night’s debate was both more and less substantive than the first. Because Trump spent so much time deflecting questions about his scandals — both the sexual harassment tape and his leaked taxes — and attacking Clinton on hers, much of its run time was spent on personality, not policy. But that’s important too. The character of the candidate, of the leader, matters just as much as their ideas; no leader, whether in business or in politics, can push through their ideas without persuasion, cooperation and teamwork.

The third Presidential debate will take place on October 19, at the University of Nevada in Las Vegas, and will have an identical format to the first one.