What is Candidate Acceptance Remorse in Hiring? 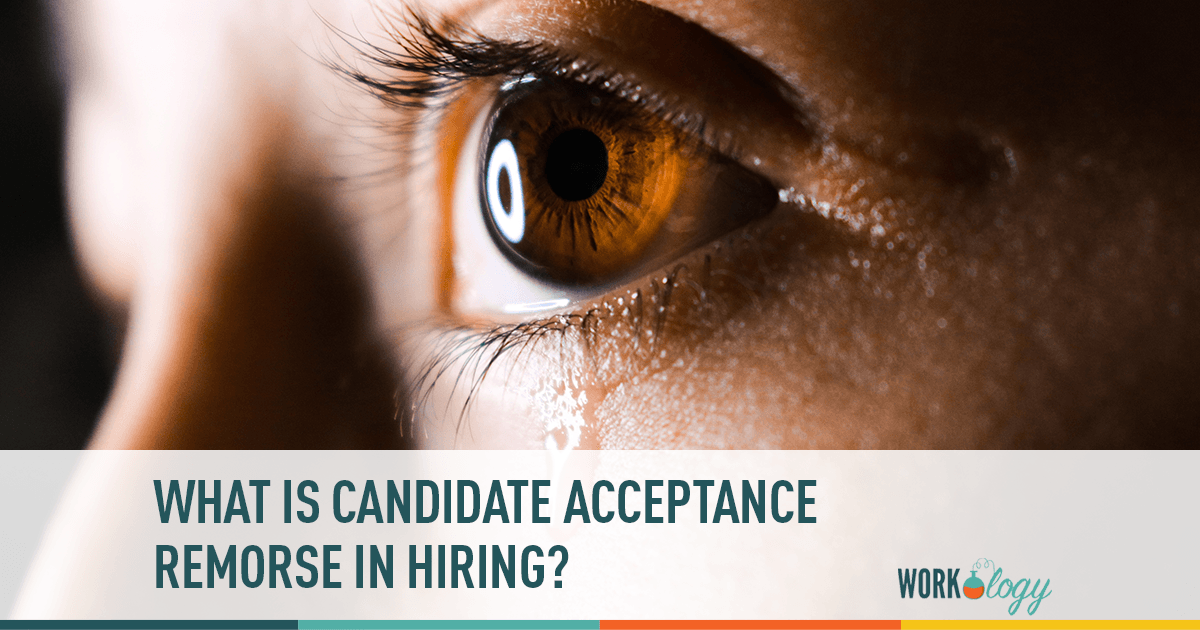 We have all been through it. We see something we want (or think we want), a house, a tv, a trendy leather jacket, whatever, and after very little true internal debate we make the purchase, buy that desired item, likely on impulse. After all, if we don’t do it right then, we might miss out! But that is just it. Maybe we were supposed to miss out. Sometime after that initial purchase, we start to doubt whether it should have been bought at all. Maybe it was too expensive and now we feel guilty or maybe we really didn’t want it when push came to shove. Eventually, we feel full-blown remorse for our purchase. We call this buyer’s remorse.

According to Google, “buyer’s remorse is the sense of regret after having made a purchase. It is frequently associated with the purchase of an expensive item such as a car or house. It may stem from fear of making the wrong choice, guilt over extravagance, or a suspicion of having been overly influenced by the seller.” Similar feelings can go beyond the purchases we make and also apply to the decisions we make. Decisions made on impulse or a whim or decisions made without all pertinent information can often leave us in a state of regret.

When it comes to taking a new job, the decision to accept a role has the potential to be done hastily. It is not uncommon for someone to feel something similar to buyer’s remorse in regards to their new role. Whether it was due to a lack of information, a quickly made decision or something else, they start to question if the role really was the right one for them and if taking the job was indeed a good decision.

Maybe they got caught up in the excitement of getting offer and didn’t take the necessary time before accepting to adequately weigh the pros and cons. Maybe once in the role, it turned out to be nothing like they had expected. Maybe after accepting the position, they got a better offer that would have been a better overall fit for them. Whatever the cause, the result is candidate acceptance remorse.

The candidate is not the only one who may end up feeling remorse over their acceptance. Sometimes it is the employer who feels it. Employers can’t afford to wait to make a job offer in this market. Active qualified candidates are likely receiving multiple offers. Even waiting one day to make your offer could be the difference between getting that great candidate and ending up with a so so one because the one you really wanted has already been swooped up. In the same regards, you could end up making an offer too soon and missing out on a great candidate who came along a little late. Either way, the employer may eventually regret hiring the employee that ended up being selected.

Having either the employee or the employer feel this acceptance remorse is one of the biggest fears of any hiring manager. Precautions should be made to avoid such circumstances, at least on the part of the employer. Whether the system is slowed down by the indecision of hiring manager, the lack of communication between them and their company’s HR department or something else, there are active steps that can and should be taken.