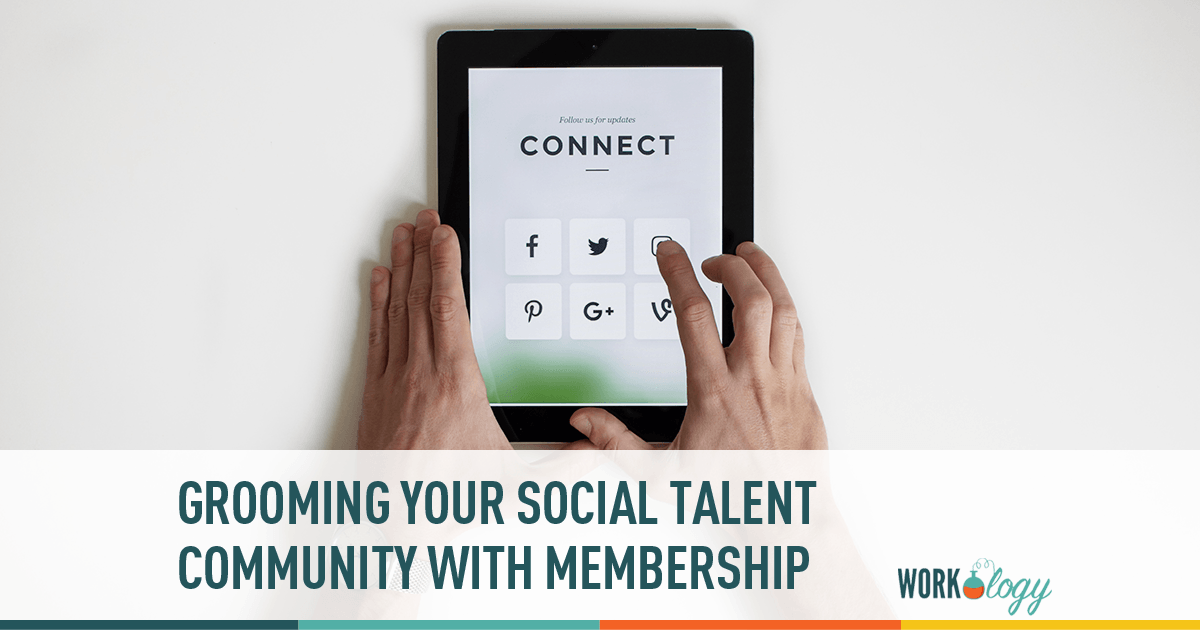 All the commitment to great strategy & killer content in the world won’t mean anything if there are not enough members to reach ‘critical mass;’ or enough people to start chain reaction discussions & sustain interactions to achieve community purpose.  Seems as though the adage “Size matters” holds true even in community building.  Community architects and managers look to “The Dunbar Number” as a guideline for group sizes and predictor of relational behavior  & group cohesion.  Dunbar, anthropologist at University of London, was able to determine the maximum size of a group in which any individual can sustain stable relations with all other individuals in that group by looking at cognitive capacity.

Working on the predication that the goal of the talent community is to identify, attract, and evaluate (to some extent) Talent; then for the budding community, the first number to focus on is nine:  Nine active members.  While seven active members is actually the lowest number to achieve a viable community status large enough to avoid “group think” & perceived sustainability by its members; at nine active members, the community has formed a viable working group.  This is advantageous as it mirrors a “squad size” that has the ability to form two or three sub-teams or “fire-teams” within the group & is the first size where true ‘leadership’ from within the community ranks begins to form, albeit informally.  As this leader is identified and accepted by the group; it is important for the Community Manager to take care to cultivate this new leader’s increased momentum within the group as it will, in turn, help to keep the overall group growing.

How to Grow Your Talent Community Membership

The next number of import is actually a range of numbers that will need to be pushed past when it comes to growing your talent community’s membership.  Those numbers are 13-25 and are known as a “nadir threshold” where groups become more difficult & dissension tends to break out.  At thirteen active members, “The Judas Number” has been reached; cliques form and mistrust on an individual level forms.  It is important to have planned on a high level of interaction, management, & monitoring by the Community Manager(s) & group leaders during this period of the Community’s existence to help deter group disintegration.  During this time period, the community is large enough that it can feel “noisy” & as though not enough attention is being paid to all members; as it was when it was a smaller group.  Additionally, since a lot of management time is required during this phase; the community feels inefficient and, to some degree, ineffective; so the highest rate of community abandonment occurs during this growth stage.

What is required to move past this stage is continued mobilization, recruitment, and “social grooming” of communication.  After an initial contraction in membership, which typically caps somewhere around 10%, ‘specialty groups’ or ‘neighborhoods’ will begin to form within the larger community and membership growth will resume.  This breakdown of the larger group into smaller sub-groups marks the push into the next phase of community development & towards the next Dunbar threshold:  the ‘non-exclusive’ community.  Non-exclusive, in this context, refers to the interaction type & level of group members:  it’s not exclusive to that community & thus, the amount of time and activity types required for social cohesion is a concern for members… so must also be an issue of import & monitoring for Community Managers.  Most communities will feel most successful at this level between 50 and 80 members; and so 50 is the third number to plan for & look to in Talent Community building.

Check back for the fourth and final post in this series where we’ll carve out the final details of the last essential pillar of the Talent Community:  Membership.  In the meantime, please revisit Part 1 and Part 2.  By following these guidelines, you will set your talent community up for long-standing membership success.