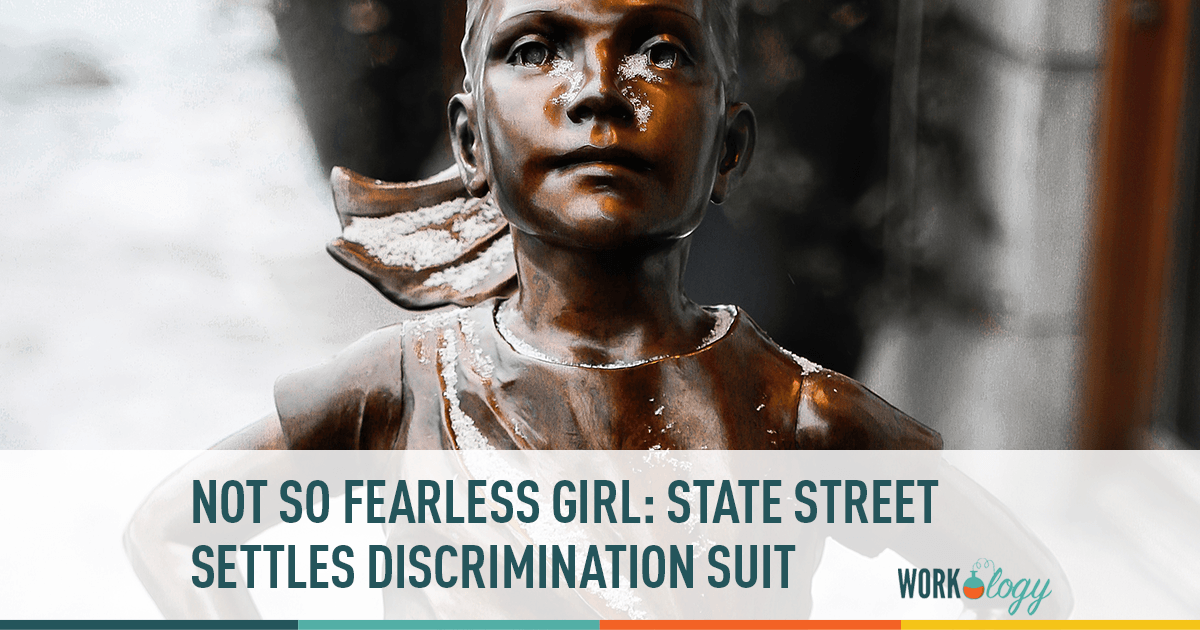 On October 6 State Street Corporation settled with the Department of Labor, agreeing to pay $4.5 million in back pay and $500,000 in interest to a settlement fund for underpaid female executives. State Street is best known as the financial services firm that paid for the creation and installation of the Fearless Girl statue.

When it debuted, the Fearless Girl was heralded by many as an icon of contemporary feminism – women were finally taking the upper echelons of power by storm. That response was calculated. The statue was installed in this year in New York’s Bowling Green the day before International Women’s Day and positioned to challenge Arturo Di Modica’s Charging Bull statue. It felt like a response to institutionalized sexism, or if you liked, to the Trump administration challenging women’s reproductive rights. It was a vague symbol of female resistance in a time when threats to women were in the news daily.

State Street commissioned Kristen Visbal with a long history in corporate art, after spending months developing the concept through mood boards. The statue’s plaque reads “Know the power of women in leadership. SHE makes a difference.” SHE is State Street’s NASDAQ ticker name. Not everyone liked Fearless Girl. Some people called it corporate feminism or a hollow grab for good publicity, but that doesn’t matter so much for State Street. Apex Marketing estimated that Fearless Girl brought State Street over $7.4 million in advertising in the form of news and op eds, positive or negative.

By settling with the Department of Labor, State Street can avoid admitting guilt. DOL investigators say that female executives were paid less in bonuses, base pay, and total compensation as compared to men in the same or similar roles. They also found evidence of pay discrimination against black employees of all genders. State Street of course disagrees with these findings – and per the terms of the settlement they’re free to do so – but they eventually decided that paying out approximately $5 million to end the potential PR crisis was well worth it. Commissioning Fearless Girl cost them only a fraction of that $5 million figure and it earned them far more. And neither of those costs nor benefits come close to the $64 million State Street paid out in 2016 to settle fraud charges related to “unwarranted commissions.”

Corporate philanthropy and sponsorship can do a lot of social good. In addition to sponsoring “public” art, State Street’s foundation offers grants to nonprofits working in education, job-readiness, college success, credentials, work experience and employment, and it prioritizes organizations working to end or reduce employment discrimination and inequality. It’s designed to dovetail with the firm’s diversity goals. State Street also founded the Boston Workforce Investment Network, a partner organization for Boston-area nonprofits working to “prepare youth for the workforce.”

By the measure of their corporate giving alone, State Street is a responsible corporate citizen and a valuable member of the communities it operates in. But when you consider the pay discrimination and fraud the company looks quite different and so do its philanthropic and community building efforts. It’s darkly funny, to be honest, that the company that sponsored Fearless Girl settled a DOL discrimination suit, but I think it’s also a useful reminder of just how strategic some firms are with corporate giving. Sometimes no matter how bad a company messes up a community can’t afford to cut ties – they’ve given too much and made themselves essential.

When we talk about matching corporate giving to your organization’s values it shouldn’t just mean finding initiatives that dovetail, somehow, with your corporate brand: donating to mental health organizations because you want your firm to be associated with building connections between people; supporting marathons and other sporting events because you want to seem vigorous; launching a diversity hiring initiative to match your support of diversity hiring nonprofits. Your philanthropic efforts shouldn’t be a shield. They should be a benchmark for your own internal behaviour, a model for the kind of organization you want to build.