May Jobs: Recession, Full Employment or Something Else? 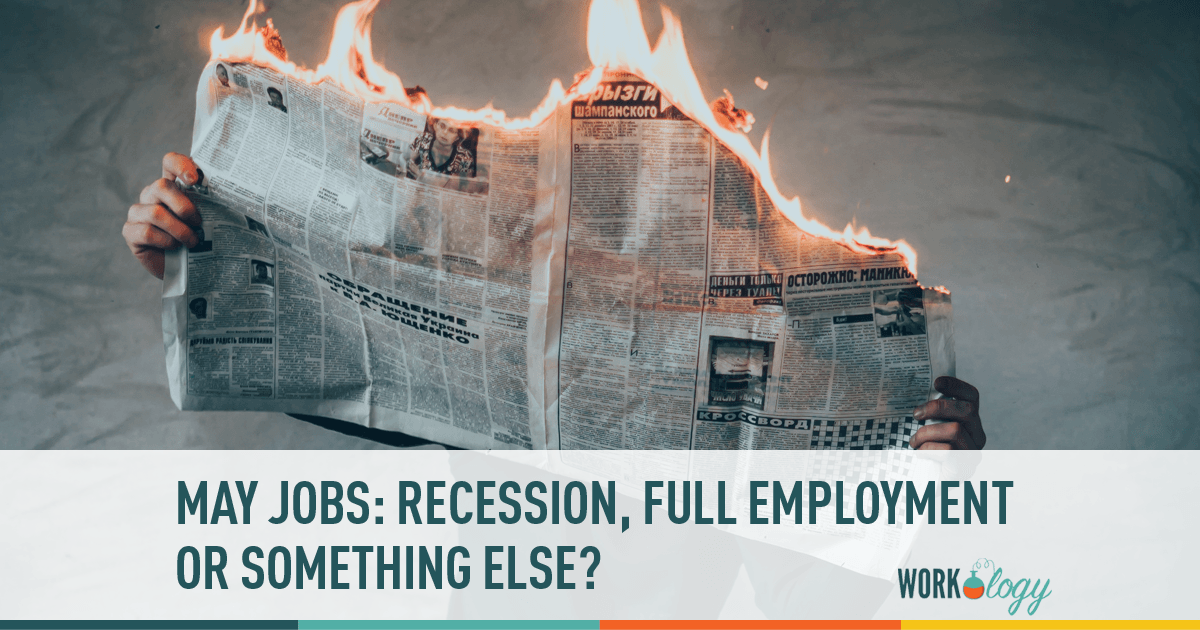 The May jobs report dropped last Friday and it was a shocking departure from the slow and steady growth trend I’ve been writing about for months. Now, if you’ve been reading my monthly job growth posts, you know I’m not one to throw around words like “shocking” lightly. But the US economy added only 38,000 jobs, and that really did shock us, from market watchers to analysts to economists to bloggers. Analysts were expecting to see growth in line with April’s 160,000 new jobs (itself a big slowdown from March’s 215,000), and were far from prepared for those low May numbers.

A drop of over 100,000 in jobs growth in the space of 4 weeks is alarming, but what does it mean in terms of overall American employment? Let’s break it down a bit:

Although hiring numbers post 08/09 crash have never matched the boom years of the 90s, from 2012 to 2015 the economy was adding an average of over 200,000 nonfarm payroll jobs per month and key indicators of labour market slack including unemployment, undermployment and labour participation rate were keeping pace. That is, although it was impossible to say that that business was booming — it wasn’t — it was clear that the country was experiencing a gradual recovery. Albeit a recovery that brought us closer to full employment but also to a new economic reality, one where traditional forms of employment — and particularly middle class employment — are less and less important to the overall economic picture.

Throughout this period, permanent part-time work, self-employment and gigging were increasingly common, and the balance of employment shifted further from manufacturing and resource extraction to often non-unionized service work. Tech and medical were also reliable sources of job growth, but because both industries offer steep barriers to entry, this did not represent an employment trend that it was easy for American workers to act — it’s a lot harder to move into medicine than it is customer service. That has meant that although overall employment has been strong, some workers have felt the impact of this trend more than others.

This dramatic shift in employment, and the increasing presence of robots and AIs in the workforce, is happening worldwide though, and it’s not a transformation that shows signs of slowing down or going away. Manufacturing is moving out of the developed world and the service sector is increasingly technologically mediated. In its Future of Jobs report, the World Economic Forum’s global predictions for employment aren’t so out of line with what’s happening in the US: 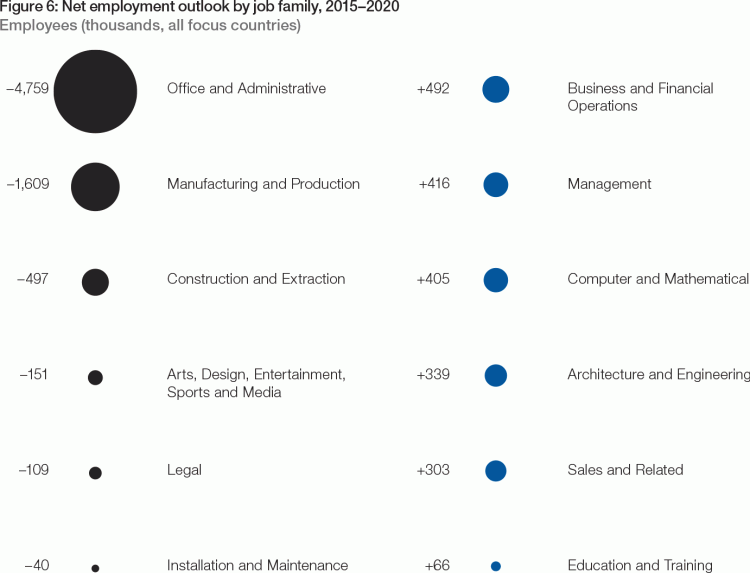 Slower Growth Is Bad… But Not Always

Since January 2016, job growth has slowed dramatically, but otherwise, economic trends remained relatively unchanged from 2015. But in May, for the first time in years, the economy not only experienced record-low job growth, but also a decline in full-time job growth. May was the worst month for job growth since September 2010.

This bad news came bundled with adjustments to recent months much sunnier jobs reports: 59,000 fewer jobs were added in March and April than were originally reported. That’s dropped the average monthly job growth in 2016 even lower, and the average for the past 3 months to 116,000.

Although the Wall Street Journal noted that the massive Verizon strike, which ended last Wednesday and will be reflected in the June report, removed 31,500 workers from the economy during the May survey, the numbers are still bleak.

“Nearly half a million people dropped out of the workforce last month, dragging down the share of Americans participating in the labor force by 0.2 percentage point to 62.6%. The labor-force participation rate has declined by 0.4 percentage point over the past two months, offsetting gains in the first quarter.”

But, the piece went on to point out that although the report was grim, Fed Chairwoman Janet Yellen remained positive about the economy as a whole and considers slowing growth “appropriate for this stage of the economic expansion.” Yellen said that “adding less than 100,000 jobs a month is enough to absorb new entrants to the labor force.” That is, although job growth was low in May it represented enough new employment opportunities that new and returning job seekers could find employment. That argument is supported by the country’s still low (especially in a global context!) unemployment and underemployment rate — most people are finding work, though not necessarily the work they want.

We’ve gotten used to big jobs reports in the last three years, but the general trend of slower growth in 2016 may just be a sign that we’re moving closer to full employment, and less of a sign that we’re all doomed. Andrew Chamberlain, chief economist at Glassdoor, told US News that

“The labor market is really a lagging indicator about what’s happening in the economy. If we really are at a turning point and this long expansion that’s lasted 7 years is really coming to an end, the first place we’re going to see that is not going to be a jobs report. It’s going to be in consumer spending and business investment, so that’s one important thing to keep in mind.

So although the stock market reacted really quite poorly to the May jobs report — as the market is wont to do — that doesn’t mean that the rest of us should panic and freak out. As Chamberlain and many other economists remind us, however bad the May report was, it’s only one data point. And as Fortune writer Stephen Grandel points out in this helpful piece, there are a number of factors — weather, seasonal adjustment of numbers — that worked to hide job growth inside an otherwise depressing report.

We track employment numbers month to month in order to learn about employment trends and learn more about what’s going on in the economy and with American workers and consumers. But month to month, it’s hard to see the big picture. We’ve had aberrant months before and the market has predictably reacted with panic, the Fed much slower and actual hiring trends even slower.

What’s really happening with that bad May jobs report? I don’t know yet, unfortunately. We’re just going to have to keep watching to find out.