How to Master Workplace Civility #SHRM18 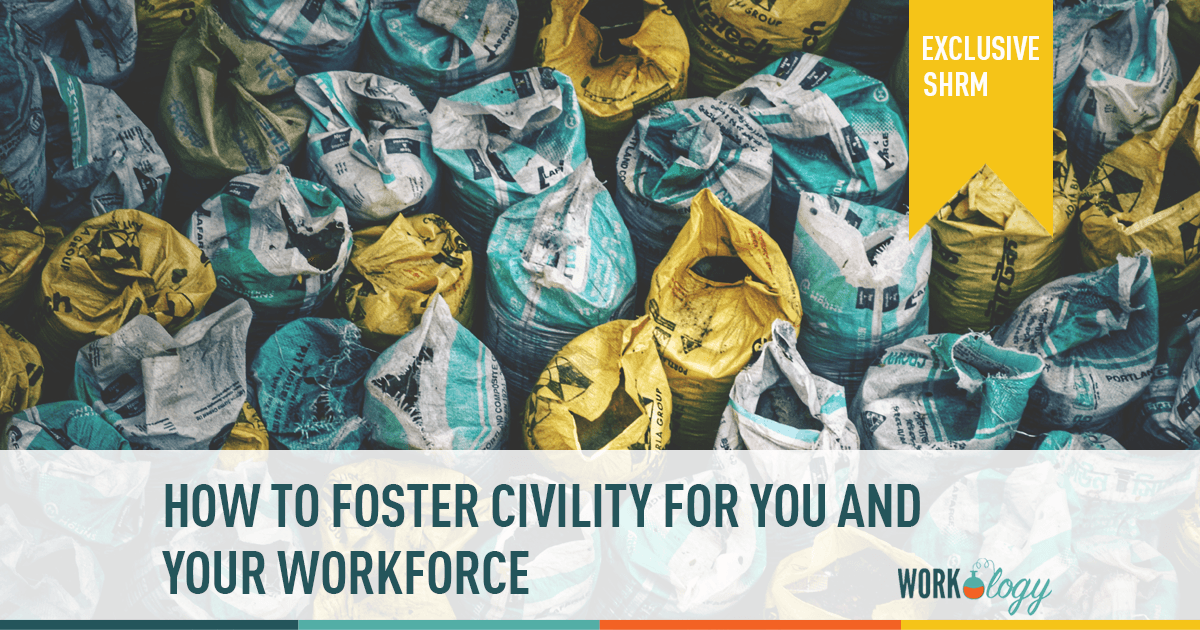 Civility usually is demonstrated through manners, courtesy, politeness, and a general awareness of the rights, wishes, concerns, and feelings of others. It includes the behavior that helps to preserve the norms for mutual respect at work and, given the current economic and political climate, it’s something we could all use more of.

In 2016, 62% of employees were treated rudely at work at least once a month, according to a global, annual poll on workplace incivility by McKinsey & Co. Since the poll began in 1998, rude behavior has increased at an increasing rate — which means that every year, chances go up that your leaders and employees are being dismissive, demeaning, and discounting to one another.

On Tuesday at the SHRM 2018 Conference, I attended a master session on “Mastering Civility: A Manifesto for the Workplace” led by Christine Porath, Associate professor, McDonough School of Business, Georgetown University. Some interesting touch points to consider included the cost of civility and so much more. I’ve experienced my share of incivility. I know you have too, and I feel like because of social media incivility has either increased or it is more prominent than ever before which is why I wanted to attend Christine’s session.

How Civility is Hurting Your Workplace

A lack of civility in the workplace can cost a company hundreds of thousands of dollars in human resource hours with regards to conflict management, as well as in turnover from employees who choose to leave a toxic workplace. Conflict resolution is a solution, not a preventative measure. It’s important to consider setting standards for your workforce that align to company values for how we treat one another.

Incivility is contagious. Christine shared during her SHRM 2018 session that research found that not just the person who was treated uncivil’s productivity was impacted. Bystanders and those who saw the interaction also be more incivil to others around them. It also impacted their own productivity at work.

This was fascinating to me, and makes total sense. I, myself have felt so drained after watching someone be treated badly in the office or at the grocery store. Recently, I saw a man yell at a mom who was out at a store shopping with a child on her own. The child was behaving badly. The man walked up to the woman and was rude to her also shaming her and raising his voice. The women who was already embarrassed cowered once he started talking. I stepped in and asked the man to leave that he wasn’t helping things. I apologized to the women and empathized with her telling her that I have absolutely been there before.

Watching that interaction unfold made me feel so drained. I can imagine how others who didn’t step in would react. And while I didn’t fully reserve the incivil action, I was able to counteract it by stepping in. Christine says simple things like saying thank you, acknowledging others, and asking for feedback are ways to increase civility in the office.

In thinking more about the mom altercation I described above, I can see how incivility would naturally impact productivity. I felt drained and all the flow or momentum I had in the day was washed away by one person’s behavior. There is also a cost for incivility in lost productivity. Stress stemming from a less-than-civil work environment can severely diminish productivity. Research from the National Institutes of Health shows that working in a group where incivility is present affects people’s mental health, even after accounting for general stress and the incivility an individual personally experienced. An employee doesn’t have to be part of the targeted population to be affected. An entire team may get pulled off track thinking about an incident, how they should respond, or whether they’re in the line of fire.

In order to effectively address incivility, training for team leaders and managers should include respect and relationship building. Getting to know employees on a personal level shows respect and helps build trust – and stands out as a rarity in this day and age. When it comes to workplace communication, your company can set the standard for civility beyond conflict avoidance. Making civility as important as team goals and results is key to team-building, as well as building a culture of respect and positive engagement.

Begin by assessing your own civility and behavior. How do you behave under pressure? How do you respond to stress? It’s important that workplace leaders model the behavior they wish to teach, and your own personal experience is an invaluable part of that learning process. Sharing your own shortcomings and how you addressed them is transparency at its finest. Employees want to know that you not only expect certain behavior from them, but that you expect the same from yourself.

Women at Work: How to Command a Room