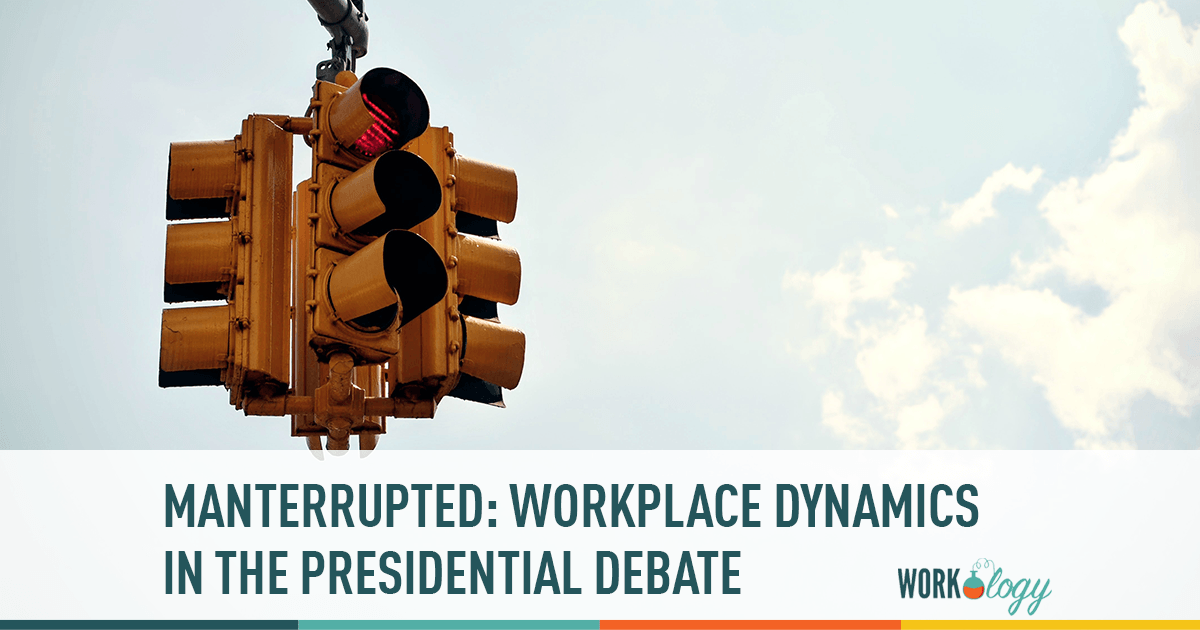 I’ve talked about the content of Tuesday’s Presidential debate, but not about the tenor. Whatever your political alignment, you probably noticed something about the way that Donald Trump and Hilary Clinton interacted. While she calmly laid out her arguments, Trump repeatedly interrupted her trying to get off a good sound bite or three. Republican and Democratic analysts have put very different spins on their interactions. Some have called Clinton cold or even boring. Others have called Trump emotional and, well, unprepared. But you can’t deny that while Clinton interrupted Trump 17 times, Trump interrupted her 51 times. According to Vox, who have a video of every interruption during the debate, Trump interrupted Clinton “25 times in the first 26 minutes of the debate.”

Workplace Dynamics in the Presidential Debate

Trump’s “manterrupting” debate style is familiar to a lot of women — because they’ve seen it in their own workplaces, in meetings and presentations. Studies of implicit bias have shown time and again that women are perceived as taking up an outsized space in conversation; that is, when they’re talking, say, 25% of the time, we perceive them as “dominating” the conversation. And other, complementary studies have shown that we tend to give ideas more credence when they come from men, and that men interrupting women during meetings is commonplace, to the point where we don’t even notice it sometimes. This is all to say that the dynamics of workplace conversation are very much influenced by our, often unconscious, sexist beliefs.

Of course, Trump’s particular style isn’t typical to most workplaces or even to politics. Most of us have experienced a milder form of manterruption. Earlier this month Cassie Werber wrote about how White House staffers have come up with a strategy to combat manterruptions: they support each other during meetings by repeating each other’s best points, making sure to give credit. So although they can’t stop male staffers from interrupting female staffers, they can amplify each others’ voices, making sure that they’re heard, no matter what tactics other staffers employ.

By tactics I don’t mean to imply that every man is out there trying to sabotage every women. Rather, conversational tactics are something we all use — they’re just the ways we’ve learned to make ourselves heard and understood, and to make connections with team members; how we gain influence. But they aren’t neutral. Conversational tactics that work well for men sometimes backfire on women. Take Hilary Clinton, who’s monitored for shouting, laughing, not smiling enough, smiling too much and being “distant.” The reverse is true too — think of more conciliatory male politicians and business leaders who have been perceived as “weak.” All conversation is gendered and conversation where something big is at stake, be it a leadership role or a bonus, is even more gendered.

The Presidential election is, in part, a competition for the country’s top executive role — the stakes, and consequently the tension, is heightened. But think of these debates and the campaign as a whole as the kind of competition that goes on in every workplace, in miniature. Trump’s attempt to control the conversation through interruption is something every working woman has experienced, and Clinton’s strategy, trying to stay cool, calm and collected, is one that’s familiar to us all too.

Manterruptions are, for many of us, just standard operating procedure.