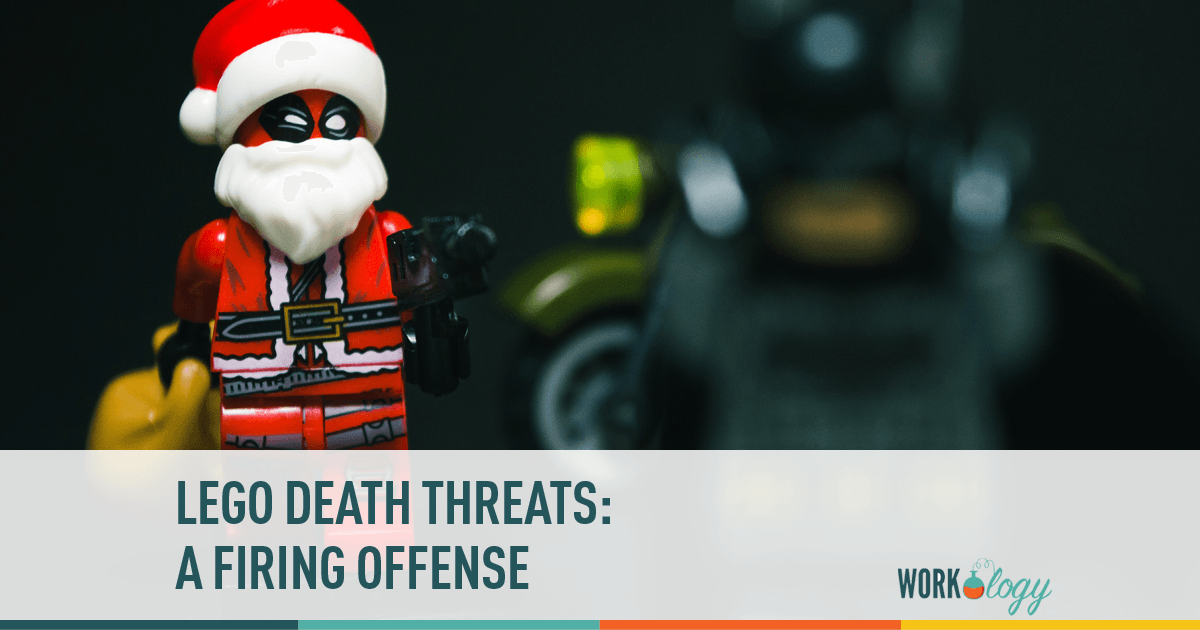 Is it ok to threaten your colleagues? No, of course not. But there’s always someone looking for a loophole in that simple truth. What if I just JOKED about threatening them? Still no. Or… threatening shadow puppets! That would be ok, right? Nope nope nope.

But here’s a new one: Shawn Roy, a New York nursing home worker, lost his job and has been ruled ineligible for unemployment benefits after posting videos that “depicted [his coworkers] in violent and sexual ways.” Videos he made with Lego minifigures. Ars Technica reported on the ruling yesterday, saying that

“One 10-minute video was called ‘Kill Buffalo Jill.’ The New York Law Journal said the video contained a mashup of rap songs and a Star Wars character ‘holding a sword… interspersed with clips of Uma Thurman’s character in Kill Bill.’

In his defense, the fired worker said the videos, about 50 in all, featured dozens of characters in movies, music, and the real world. He said none of the characters depicted his coworkers. ‘It is far-fetched fiction at its very best,’ Roy said.

The Unemployment Insurance Appeals Board, however, had ruled in 2014 that it was ‘not convinced that it was mere coincidence that he chose songs or movies with names similar to those of his coworkers.'”

In addition to the “Buffalo Jill” video, Roy published other videos starring characters who shared names and character traits with coworkers, and graphic videos of sex, sexual abuse, violence, and even murder scene recreations. Although Roy insists that these were just parodies and any similarities to real people were only coincidences, neither his coworkers, who filed several complaints about the videos, nor the insurance appeal board quite agreed.

Further, the insurance appeal board ruled that Roy failed to comply with his employer’s code of conduct – regardless of who the subject of those videos was, either coworkers, celebrities or fictional characters. The panel ruled that the “[c]laimant was obligated ‘even during his off-duty hours, to honor the standards of behavior which his employer has a right to expect of him and … he may be denied unemployment benefits as a result of misconduct in connection with his work if he fails to live up to this obligation.”

Can you be fired for your conduct on social media? Yes. Not for being unpleasant or rude. Not for holding political beliefs divergent from your employer. But threatening behaviour, racist comments, violating confidentiality, bragging about misconduct and cyber bullying are all grounds for dismissal.

We should all be careful about how we use social media, what we share and what manner we do it in. While not everything we do on social media is relevant to our employers, it is of course always relevant to how others, including recruiters, see us. Part of why we love social media is how it helps us to craft a personal brand – hopefully, a good one. It’s just common sense: don’t be terrible. Don’t be terrible on social media, in public, or really, in general. Even if you find a nice legal loophole that lets you be your worst self and not get fired, you’ve still made yourself an unattractive hire and made your colleagues less likely to trust you.