Is This the Worst Holiday Party Debacle of 2016? 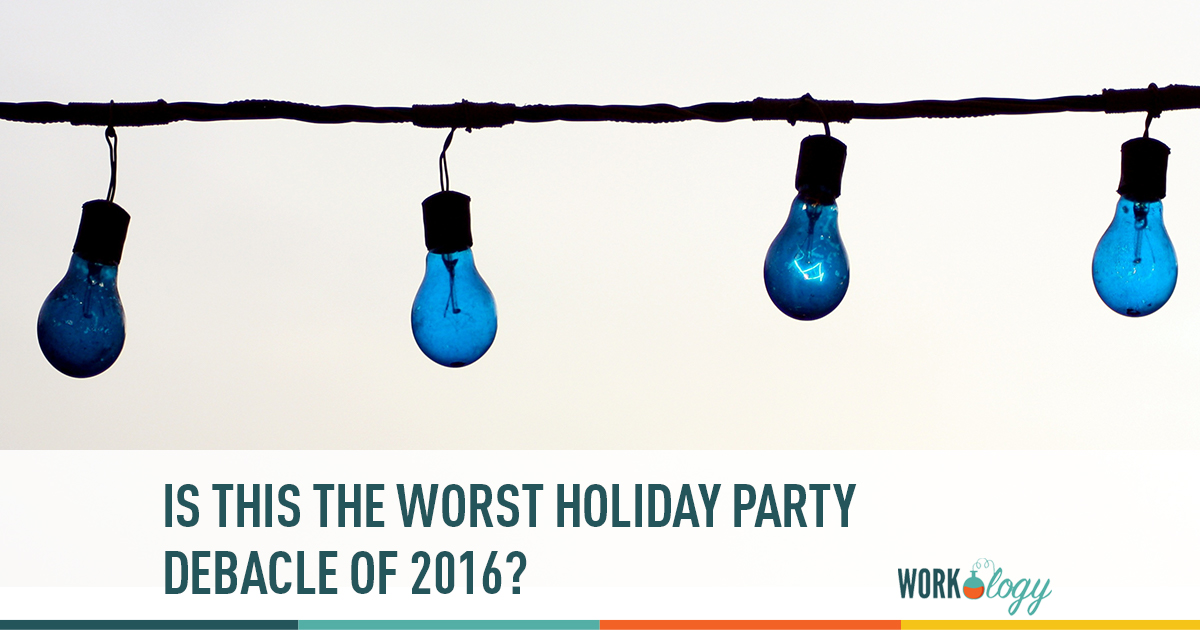 When I worked in retail as a recruiter and HR assistant there was one task I dreaded above all others. No, not updating employee files, not spring cleaning and not filling out turnover reports. It was the holiday party. Dealing with whatever employee relations disaster that unfolded the night before.

Is This the Worst Holiday Party Debacle of 2016?

It’s not that I worked with a bad group of people. On the contrary, most were hardworking, upbeat and committed to delivering good service and supporting the brand. When it came to the holiday party, all those hardworking people wanted a chance to relax and enjoy themselves. Usually this meant having a few drinks, dancing a little dirty and winning something nice in the raffle. (No matter how many tickets I bought I never won the TV. Who’s bitter? Not me.) But no matter the company, no matter the team, there was always someone who wanted to cut a little too loose. If you’ve worked in HR or leadership you know exactly what I’m talking about.

The messy drunk. The groper. The intoxicated gossip. The missing drink tickets. The reveller who vomits on the dance floor. The red shirt who somehow — SOMEHOW!? —  manages to injure themselves in the bathroom, making you worry about liability insurance at one in the morning at a banquet hall you had to cab to because public transit doesn’t even stop at the bizarre location your social committee decided was the perfect place for your benighted holiday party. UGH. Holiday parties. They’re not good.

A friend of mine who works at a tech startup recently told me that her boss, who doesn’t drink, decided to hold a holiday lunch at a casual restaurant near their office, instead of a dress up dinner and drinks party somewhere fancier. This, I thought, was genius. Compliments to her boss, who has dodged so many HR bullets by having the party a lunchtime, well before the hour where it’s socially acceptable to get drunk. (No day drinking at the company party, friends. I said no!) And there’s something nice about it, don’t you think? Low stress, contained, easy for everyone to get to, and almost no drinking.

But although I’ve seen some apocalyptic post-party aftermaths, I haven’t had to deal with a baby trader vomiting on the firm’s founder. For which I am eternally grateful.

Over at Business Insider Rachel Levy shares a story making the rounds of young Wall Street, of some intrepid partier committing so fully to the holiday spirit, he was wasted by 7 PM, vomited on his boss, got lost in Brooklyn (having started, I assume, the night in Manhattan), and then showing up the next day for work in yesterday’s suit, now riddled with holes. For the record, he was sent home. Wow. W O W. Although some Wall Street firms might shrug this off as youthful shenanigans (“he’s got spirit!”), I still can’t help but flinch just at reading this, especially considering how often clients and partners turn up at big corporate holiday parties. What was this Chad, Connor or Jake thinking?

But I’m not sure this fiasco is the worst holiday party debacle of 2016. That honour might have to go to Yahoo, who threw a lavish holiday party right after disclosing another major hack. Yahoo employees shared photos from the party across their social media accounts, seemingly unfazed by rumours that Verizon would be demanding a post-hack discount of the company. Of course Yahoo employees deserve a nice holiday party. I’m sure they’ve been working hard to combat the reams of bad press the company has received in recent years. But… I can’t help but imagine myself in the shoes of Yahoo’s communications staff, fielding snide inquiries about how much the company spent on its party while its users suffered. 😰

Maybe it’s just me but every holiday party seems like a potential trip to the darkest timeline. Are there good holiday parties? Did you in fact attend or host one this year? Tell me about it in the comments and restore my faith in the human race.