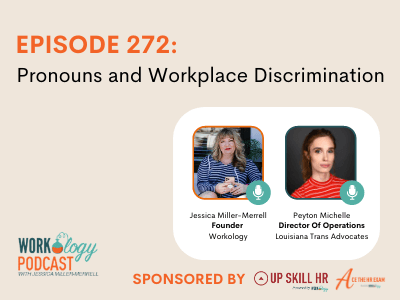 As a society, we have grown up with the use of certain pronouns to use that refer to a person based on a male/female framework. However, this is changing. A growing number of people are asking to be referred to not as a gender to which they are “assigned,” but in a way that aligns with their defined identity. If our applications, new hire paperwork, and employee onboarding doesn’t include space for pronoun identification in the workplace, we are not just overlooking a segment of our community, we are opening our companies up to discrimination lawsuits.

I spoke to Peyton Michelle, Director Of Operations at Louisiana Trans Advocates and Digital Marketing Assistant at Rep Cap. In July of 2020, Peyton became the first openly trans person to win an election in Louisiana when she was elected to the Democratic State Central Committee (DSCC).

“I wasn’t able to join a traditional workplace until I was 22 because no one wanted to hire me as a trans person, so I spent a lot of time volunteering for nonprofits in Louisiana and educating myself about advocacy. I was recruited for my job at Rep Cap by another transgender employee who worked there so I knew it would be a safe place for me.”

I asked Peyton what she wants HR leaders to understand about inclusivity. “The biggest thing that I would like the corporate HR world to know about is that being inclusive isn’t just about accommodating someone’s needs, it means integrating their needs into the system of your workplace. I can’t speak for all trans people, but I want the respect to be embedded into the system that promotes connection and conversation in the workplace,” said Peyton.

“One of the biggest ways people can dive into this is by asking people, everyone, about their pronouns…not just people who appear to be trans or different. It might seem redundant to ask people who identify as cisgender what their pronouns are, but if we ask everyone, then everyone gets the opportunity to tell you if it’s different. More people are recognizing that they don’t fit a typical gender construct and asking for pronouns should be normalized.”

The term “cisgender” (pronounced “sis-gender”) refers to people whose gender identity and expression match the biological sex they were assigned when they were born.

One really impactful thing I learned from Peyton is that we shouldn’t ask for “preferred” pronouns. Peyton said that “using the term preferred pronouns really implies that I have a preference for she/her pronouns, but it’s not a preference or an option. Asking for a person’s pronoun is like asking for a person’s name.” For example, you wouldn’t ask a person what their preferred name is; you simply ask their name. As in, “Hello, my name is Jessica and my pronouns are she/her” and not “Hello my preferred name is Jessica and my preferred pronouns are she/her (but you can literally call me anything because it’s just a preference).” Again, not a choice, not an option.

Peyton added that “pronouns are a big deal to trans people, but what affects us to a greater degree is employers not prioritizing trans people. This could be public restrooms or healthcare plans that don’t cover trans care.”

There is a difference between being transphobic and being ignorant about trans inclusivity, but if inclusivity isn’t built into your hiring process, it’s a failure for companies at the starting line. It does affect your employer brand because from the outside, candidates don’t know if your company is transphobic or simply overlooking a marginalized segment of the population – and they will assume that you’re transphobic.

“It’s a common misconception that trans people want special treatment. In reality, trans people just want to be treated as whatever ‘normal’ is.” - @PeytonRose22 #Pronouns #WorkologyPodcast Click To Tweet

Employers CAN work to normalize gender nonconformity through education around trans rights and inclusivity. I asked Peyton the best way for HR leaders to approach this and she said, “pay trans people to talk to your employees. Some months ago, a colleague and I did a presentation for a group of professors at a local community college. It was organized and attended by the assistant dean of the college, but only about 10 professors attended. Even though the assistant dean was involved in promoting the presentation, it wasn’t mandatory and it was scheduled during a time when classes were in session. There were people in that meeting who have never met a trans person and I know they left the meeting thinking differently than when they arrived. The majority of cis people don’t know a trans person and many think that being trans is a political statement. It’s not. We’re just living our lives. Meeting a trans person can help people understand us better.”

When someone requests to be addressed by a specific pronoun, we should absolutely accommodate that request. However, that’s the lowest possible bar. In order to be truly inclusive, we must be able to work with our managers, team leaders, company leaders, and employees to educate them on inclusivity and the appropriate use of pronouns in the workplace. Normalizing working with people who are LGBTQ+ isn’t just about legal compliance; it’s the right and respectful thing to do. I’m so glad to have had the opportunity to have Peyton on the podcast.

– Everything You’ve Ever Wanted to Know About Gender-Neutral Pronouns

– How to Respectfully Use Gender Pronouns in the Workplace

– 55% of Americans Are Cool with their LGBTQ Coworkers