Ep 73 – How to Hire for Culture Fit Like Southwest Careers 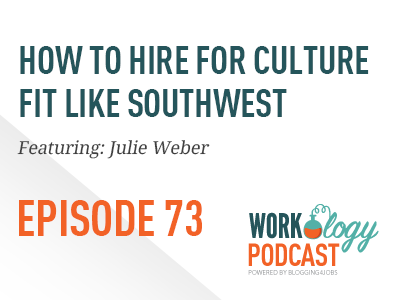 According to Gallup, as of June 2015, “the percentage of U.S. workers engaged in their jobs continues to hold steady at 31.9%. Passive and active employee disengagement is costly business when you relate the stats to the 2015 total wages and salaries, which came out to about eight trillions of dollars. U.S. employers pay unproductive employees more than $2.5 trillion dollars in wages every year.

This number is the reason that hiring isn’t just about finding the best quality candidates for a role but making sure that the company and the new employee’s culture and values are aligned.

Episode 73: How to Hire for Culture Fit Like Southwest Careers with Julie Weber (@southwestair)

Julie Weber, the VP of People with Southwest walks us through Southwest’s culture fit hiring process. Julie says that above all Southwest hires for a warrior spirit, a service heart and fun loving attitude. Southwest receives a job application every 2 seconds and hires less than 2% of all applicants.

Southwest uses a behavioral assessment and interview process. The career motivation interview is used to understand if the candidates are motivated and understand the job. Julie says ramp agent is their most commonly hired position. It’s a very physical job that is outside and in the elements. The People department and those involved in the hiring and selection process want to make sure that employees are committed, motivated and fully aware of the role.

Southwest team members and peers called Star Performers are included in hiring process. Employees are trained in how to interview according to legal guidelines but also the Southwest way. Southwest puts employees first before customers and their shareholders. The belief is that if an organization has happy people, the rest will follow.

This “people first” and culture fit philosophy has been a part of the Southwest for a very long time. In fact, their Human Resources and Recruiting department has been called the People Department for 20 years. Listen to the podcast to hear a very endearing story about the President Emeritus, Colleen Barrett. Julie says she is the heart and soul of Southwest and has taught them what it means to put people first.

In preparing for this podcast interview with Julie, I found that Southwest doesn’t separate their corporate and consumer brand from their employer brand. In fact, Southwest’s People Department has a very close relationship to their Communication Team. Communication team members are embedded into departments allowing for improved communication and relationships throughout the organization. Interesting to note that the People Department has team members that are distributed throughout the organizational similarly.

Last call for resumes! Today is the last day to apply for the fall semester of our college internship program. https://t.co/ToQsStRstx

Their social media account, @southwestair regularly tweets career and recruiting relates topics like the ones below. Their blog also has a unified branding theme. Southwest has one of the most engaging social media brands. I’ve been rebooked on flights via Twitter Direct Message, and it’s not surprising Julie says applicants share similar stories like mine during job interviews.

Southwest Culture is about unification and a central voice that is committed to having fun with employees taking the lead. Listen to the podcast episode to learn more about Southwest’s culture fit and career practices.

Connect with Julie Weber on LinkedIn.