Ep 156 – Workplace Politics and Running for Office While in HR 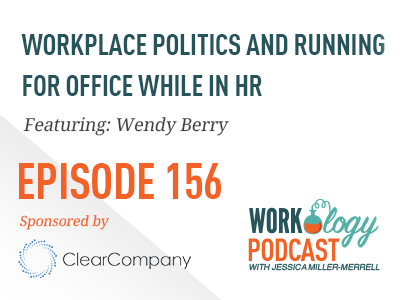 Two years after Hillary Clinton became the first woman to win the presidential nomination of a major U.S. political party, and with a record number of women running for Congress in 2018, a majority of Americans say they would like to see more women in top leadership positions – not only in politics, but also in the corporate world – according to a new Pew Research Center survey. But most also say that men still have an easier path to the top and that women have to do more to prove their worth. And the public is skeptical that the country will ever achieve gender parity in politics or in business.

Episode 156: Workplace Politics and Running for Office While in HR with Wendy Berry

Today, I’m joined by Wendy Berry. She is an Employee Relations HR Representative at Fairview Health Services and a candidate for city council office in West St. Paul, Minnesota’s third ward. I’m fascinated by Wendy and her work as an HR professional, but also her decision to get involved in politics. Wendy walks us through the why of how she decided to run for city council and how having female and LGBTQ representation among political leaders in her community is so important.

Wendy says she decided to get involved after realizing that the city council was an all-male group and experiencing sexism. She talked with the mayor and received support and insights from other city council members, past and present, before deciding to become involved.

Should Employers Support Politics at Work?

Wendy is in a special position as an HR leader at an organization, and also someone who is currently running for political office. I think that, for most HR and workplace leaders, the common opinion or position is to avoid the subject of politics when it comes the workplace. Wendy says that employers need to encourage employees to be involved in politics and democracy. Political conversations are happening in the office, in the lunchroom and in other employee areas. Her current employer has been supportive of her involvement in politics.

Wendy encourages readers to get involved in their own local communities and consider running for office or volunteering for campaigns. We’ve included a list of online resources that list ways for listeners to get involved in politics as a volunteer or candidate. Wendy’s campaign is an inspiration. In addition to her full-time job and parenting two young children, she’s working to make a difference and an impact in her community. I hope she inspires you to get involved and get out there.