Ep 123: How the Freelance Economy Changes Universal Access for Employers 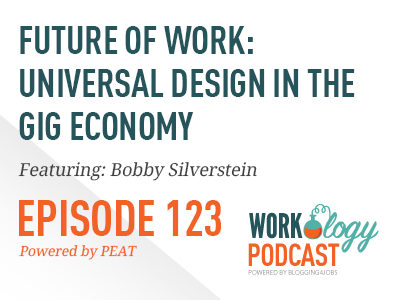 Earlier this year CNN reported that the freelance economy now accounts for 34% of the total workforce. It is expected to grow to 43% by 2020. As we see a substantial shift in the employment world from the traditional employee to the contract, gig or freelance worker taking center stage, I, along with PEAT, wanted to talk about universal access for everyone who is interested in being a part of this new fluid workforce, including those with a disability.

In today’s podcast, which continues the conversation around the future of work, I’m joined by Bobby Silverstein. He is a partner in the law firm of Powers, Pyles, Sutter, and Verville, PC. Bobby was also the staff director and chief counsel of the U.S. Senate Subcommittee on Disability Policy when the Americans with Disabilities Act was signed into law and is a member of the PEAT Team. His expertise is civil rights laws for people with disabilities.

In this interview, Bobby shares with us how the shift to a gig or project-based workforce changes our obligations when it comes to accessibility as an employer. Working in HR and recruitment, we’re probably all familiar with the Americans with Disabilities Act and other employment laws designed to create a consistent hiring and employment process and experience for all types of people. But as the traditional workforce changes, moving from permanent employment to freelance and project-based work, what do employers need to know? Bobby gets us up to speed and gives listeners a reason to re-evaluate how they hire their gig workforce.

How the ADA Supports the Gig Economy and People with Disabilities

The ADA or Americans with Disabilities Act is a civil rights statute ensuring that people with disabilities enjoy opportunities to participate in the gig economy that are equal to and as effective and meaningful as those provided to others. Bobby talks about the legal implementations around the Americans with Disabilities Act Title I, Title II, Title III for businesses who are hiring gig, project, contract, and freelance workers.

The ADA seeks to provide universal access for everyone to a business including gig workers. This means that companies need to evaluate their “hiring” process for gig workers and contract workers. Just because a company doesn’t have a traditional employer/employer relationship does not mean they are not subject to laws including the  ADA. Bobby cautions that companies need to be evaluating their “hiring” process when it comes to their gig workers. The platforms, technology, and ways in which independent contractors are able to apply, bid, or express interest for the role needs to be accessible.

Since many companies are using web-based platforms like Fiverr, Upwork, Mechanical Turk, and others to hire these contractors, these technologies need to be ADA compliant. Since this area is growing in popularity as a personal lifestyle, marketplaces like those mentioned above will only continue to grow.

As an aside, over the last 12 months, we’ve seen large investments in the area of HR technology for venture firms. In 2017, investments totaled over a billion to HR technology companies and a growing number of them have been web-based platforms and marketplaces to support the gig economy. These include startups like Lorem, ShortList, Expert360. These platforms need to be accessible to everyone.

The definition of a gig worker versus a permanent employee is also in flux, and there are a number of legal cases which Bobby shares that shaping the way we define the gig economy. In New York, three Uber drivers were awarded unemployment benefits by an administrative law judge. Uber continues to hold steady that its drivers are contractors. If Uber convinces courts that it isn’t in the “driving” business at all but instead is merely creating an online marketplace through its web-based platform, then the result should be that drivers may state their claims as customers seeking fair access to the marketplace offered on the web-based platform rather than as employees seeking fair employment opportunities.

Other recent decisions of interest come from several circuits (5th, 9th, and 10th) of the U.S. Court of Appeals. Bobby says these decisions are interpreting the law on which the ADA is modeled (Section 504 of the Rehabilitation—nondiscrimination on the basis of disability by recipients of federal financial assistance) held that independent contractors serving as workers may file a discrimination complaint, even though they were not protected by the specific provisions of Section 504 applicable to the employer-employee relationship.

As the workplace changes, so should our obligation as employers and clients to the freelance and gig economy workers. We need to be mindful that just because the employment relationship may have changed, our legal obligation has likely not. Universal design and inclusion are critical for employees, freelancers and gig workers too. Sounds like it might be time to add civil rights training to your leadership training as well as our own HR development learnings.

Connect with Bobby Silverstein on LinkedIn.