The Case for an Employee Rehire Policy: Coach Snyder Effect 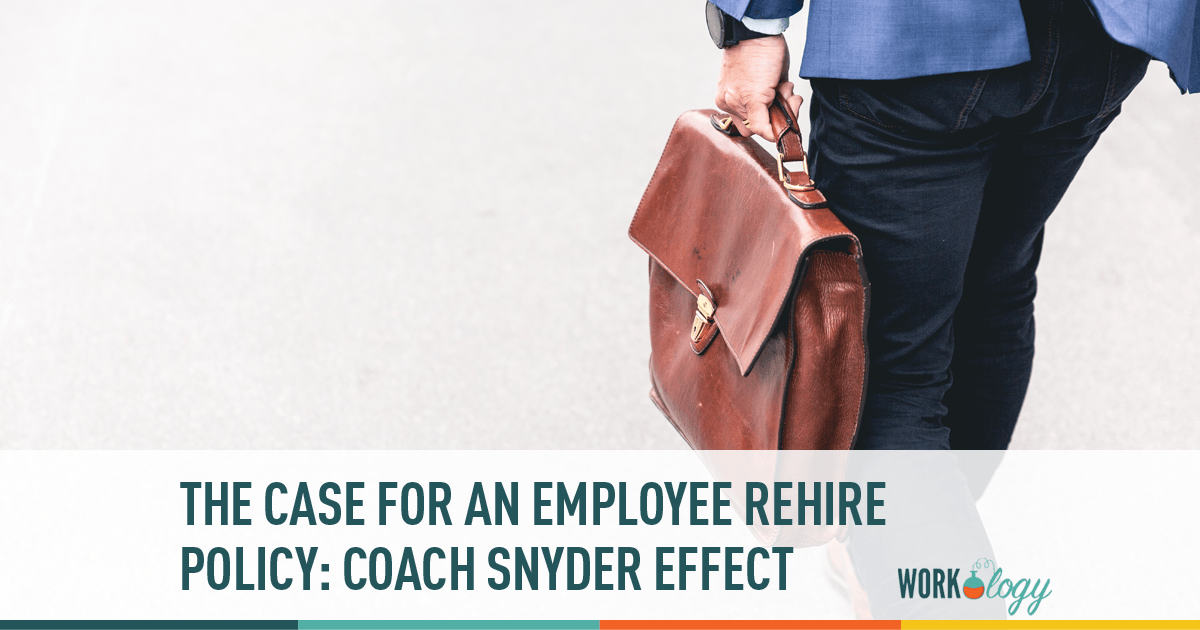 The economy is like a pendulum and appears it’s started its swing back toward prosperity.  As a hiring manager or organizational leader, it may have been only a few short years ago you were scheduling meetings in regard to corporate layoffs.  Layoffs cost your organization more than the size of its employees.

And, you lost more than productivity you can simply regain with the sourcing, hiring and training of a new body.  It is more than can be easily illustrated in popular HR Metrics like the cost per hire.  Experience, insight and industry knowledge walked out the door with every pink slip.  Today, you want to regain the momentum you lost, wind up and take off down the path of prosperity and growth.

Should You Rehire Ex-Employees?

A rehire, often referred to as a boomerang employee, is defined as someone who is a returning employee.  Their role may be the same or different, but they left the organization at some point either voluntarily or involuntarily.  They already understand the culture of the organization, they know what is expected and are familiar with the work environment.

The boomerang employee doesn’t just have to be a victim of a layoff.  He or she could have left for what seemed like a greener pasture.  Maybe they retired and realized they weren’t quite ready.  Whatever the case may be, they used to work for your company and now don’t. But, having them back could mean an immediate boost to your company’s productivity and talent.

I Call This the Coach Snyder Effect.

Rehires come in all shapes, sizes, and ages.  Take head football Coach Bill Snyder of the Kansas State Wildcats.  Snider took the head football coaching job at Kansas State in 1989.  What Snyder did for the Wildcats is nothing short of legendary and his list of awards and accomplishments through the years are amazing.  In 2005, he retired and Kansas State moved on.Then, the worst happened.  KSU’s tradition amazing football KSU fans had grown to expect took an abrupt nosedive.  It didn’t take long for rumors of a return from retirement to start churning.  And, in November 2008, Coach Snyder was rehired and returned to the sidelines in 2009 – a rare return in college football.

As of today, Kansas State football has made a quick returned to glory.  It is currently 10-1 and holds the number 1 ranking in the Big 12 and is currently ranked number 6 in the BCS .  Unfortunately, the Wildcats lost last night and in blowout fashion to Baylor after enjoying a week at the number one spot.  At the moment, it looks as though Notre Dame and Alabama will play in the BCS Title game.  Despite any disappointment for its fans, they really aren’t complaining.  And, for Synder, it’s not a shabby performance for any coach, let alone for a once retired football coach who returned his team to its former glory.

The same holds true for former Starbucks CEO, Howard Schultz who returned to lead Starbucks, the struggling coffee house chain in early 2008.  Schultz returned to replace Jim Donald as the head coffee bean.   Upon the head bean’s return organizational changes were made resulting in store closures, layoffs, and product offering changes.  It seems that this boomerang made an impact as sales for Starbucks continue to soar since his return.

Another great example is with Jay Leno.  In 2004, NBC brought on Conan O’Brien with the intentions of replacing Jay Leno as late night show host.  Leno retired as host in 2009 ushering a new era as O’Brien took the lead spot.  Ratings suffered and Leno was effectively rehired into his old position, debuting the new old Late Show in March 2010.

Should you bring back lost employees and is it a good idea for your company?  Before you pick start sifting through past employee files, there are some things you should consider:

Little known fact I’m actually a Wildcat.  Yes, I graduated and went to school at Kansas State University when Bill Snyder rose to fame before he boomeranged back.  I’m a KSU Alumni, and that is something I do not readily admit especially since I was raised a University of Kansas Jayhawk fan (KSU’s interstate rival) and amidst living squarely in University of Oklahoma country in Norman, Oklahoma.

Admittedly, the spotlight for the Wildcats has been fun to watch and certainly legitimizes Bill as a linchpin for its football organization.  With this new-found Wildcat pride brought on from its football success, I don’t try to mask where I received my degree by suggesting it was from the “University of Kansas West Campus” (an insider poke at Kansas State as it is located in Manhattan Kan., just an hour and a half west from KU’s campus in Lawrence, Kan.).  Regardless of who I cheer for and when, I do hope this time around, Coach Snyder is putting more time into his succession planning strategy.

This post was originally published by Glassdoor.com where I’m a regular contributor.  Click here to see more.