Consistent With Your Gender Identity: Dept of Labour Rule on Bathroom Use 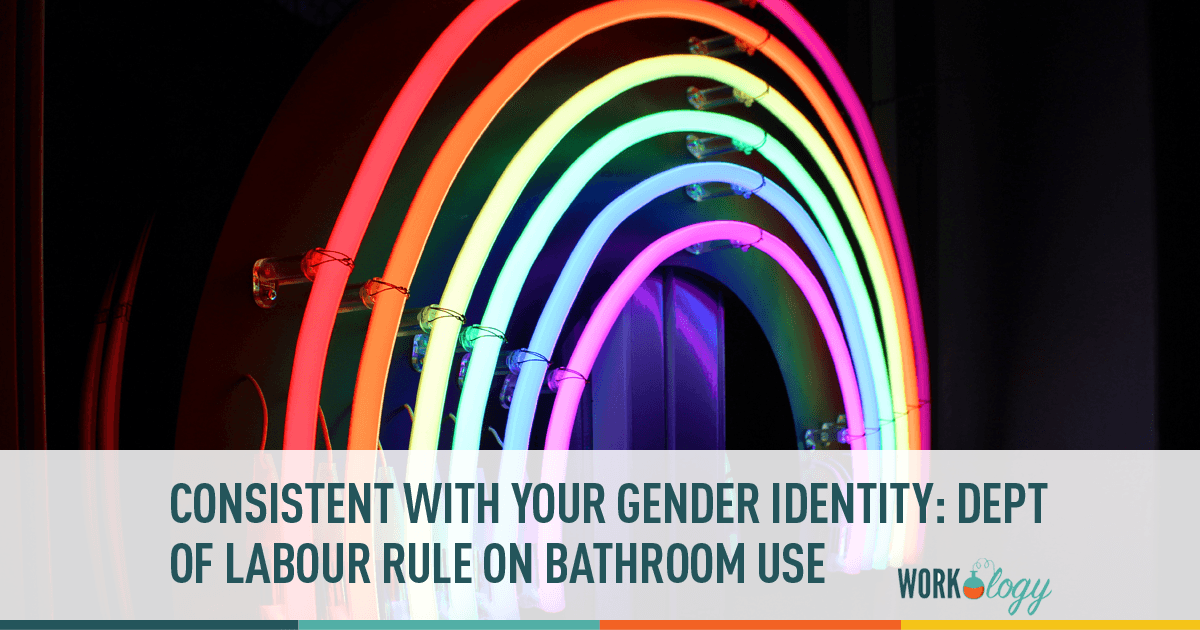 A new final rule on sex and gender-based bias from the Department of Labour reaffirms principles that should already be familiar to you: it is not ok to discriminate against people for reasons of sex, gender or sexual orientation; and discrimination includes bias in hiring, promotions and pay, and in unequal working conditions or benefits. The rule, which governs employer obligations for those who have federal contracts of $10,000 or more over a 12-month period, goes into effect 60 days from its announcement on June 14.

The rule lays out certain responsibilities and expectations around leave, discriminatory hiring and promotions and work environment. But what’s most interesting to me is that it says, very specifically, that employers subject to the rule cannot impose discriminatory bathroom policies on workers. That is, as far as the Department of Labour is concerned, federal contractors cannot force transgender employees to use the wrong bathroom. Imposing any kind of bathroom restrictions would constitute a hostile work environment and clear, sex and gender-based discrimination.

So what happens when the Department of Labour’s final rule comes into conflict with North Carolina’s bathroom bill?

What the Rule Covers

The Department of Labour’s rules on sex discrimination haven’t been updated in 40 years, so this final rule was both anticipated and quite welcome. Of course, in the intervening years other workplace rules and federal and state laws have been updated, so it’s not as though federal contractors have been operating based on decades out of date policies. In fact, in 2014 President Obama amended Executive Order 11246 — which this final rule relates to — to prohibit discrimination based on sexual orientation and gender identity.

What the final rule does do, is specifically lay out contractor and subcontractor obligations, prohibitions and provides best practices. It was developed in consultation with contractors and reaffirms the President’s amendment and, generally speaking, his progressive policy program. Contractors with up-to-date discrimination policies in compliance with existing federal regulations should have little work to do in response to the final rule — because we already knew, essentially, what the content of this ruling would be; only the specifics were up for debate.

But just because the updates were expected doesn’t mean they didn’t include substantial changes to the previous rules. The new final rule expands protections for all employees, as well prohibiting discrimination based on sexual origin and gender identity.  The rule enshrines equal access to medical and leave benefits, including parental leave for both mothers and fathers, and equal treatment in raises, promotions, retirement and all other benefits and work perks.

Broadly speaking, it bans sex and gender-based discrimination in hiring, raises, promotions and anything else that works to widen the gender pay gap, but the rule does not require pay to be equal for employees in a given role at all times. This provision exists so that employers and managers can maintain merit-based raise and bonus programs. Employers should be able to demonstrate that unequal pay is not a result of unequal access, but only reflects employee responsibility and performance. That is, all employees regardless of gender or sexual orientation should have the same opportunity to vie for promotions, raises and bonuses.

Hearteningly, the rule is very specific when it comes prohibiting discrimination against transgender people. It defines discriminatory policies as anything “resulting in disparate treatment based on nonconformity to gender norms and expectations, as well as an employee’s stated gender which might differ from his or her sex at birth. The final rule clarifies that consistent with this, contractor employees must be allowed to use bathrooms, changing rooms, and showers consistent with their identified gender even if that differs from their sex.”

While this final rule is in line with recent updates to federal employment and discrimination laws, including the 2014 update to Executive Order 11246, it does pose a problem for contractors in states like North Carolina that have pursued discriminatory bathroom bills. In fact, it puts them in direct contradiction with the Department of Labour’s new final rule.

Workplaces that are subject to both the DoL’s new final rule and a state bathroom bill cannot comply with both federal and state rules — there can be no compromise position between the two. The North Carolina Public Facilities Privacy & Security Act applies to state schools and government buildings but other bathroom bills that have been proposed or are currently being debated have been even more sweeping. David Fortney, a management attorney with FortneyScott, told Bloomberg it was a “Hobbesian choice.”

Although this ruling has been in the works for sometime, given the timing it’s difficult to not see this as a rebuke of the bathroom bills that have been working their way through state legislatures. The Department of Labour can’t strike those laws from the books, but its new final rule can make bathroom bills less appealing to even the most activist legislators — striking an impossible balance between state and federal rules would mean a significant investment in legal fees that would be ultimately wasted.

Ultimately this new final rule, entirely consistent with federal legislative and regulatory trends, reveals the bathroom bills for what they are: discriminatory, hateful and an undue burden on employers and public facilities. They create legal and budgetary problems for employers and enshrine policies that can only make workplaces more hostile, and the lives of LGBTQ+ people harder.