5 SXSW Trends to Take Home With You 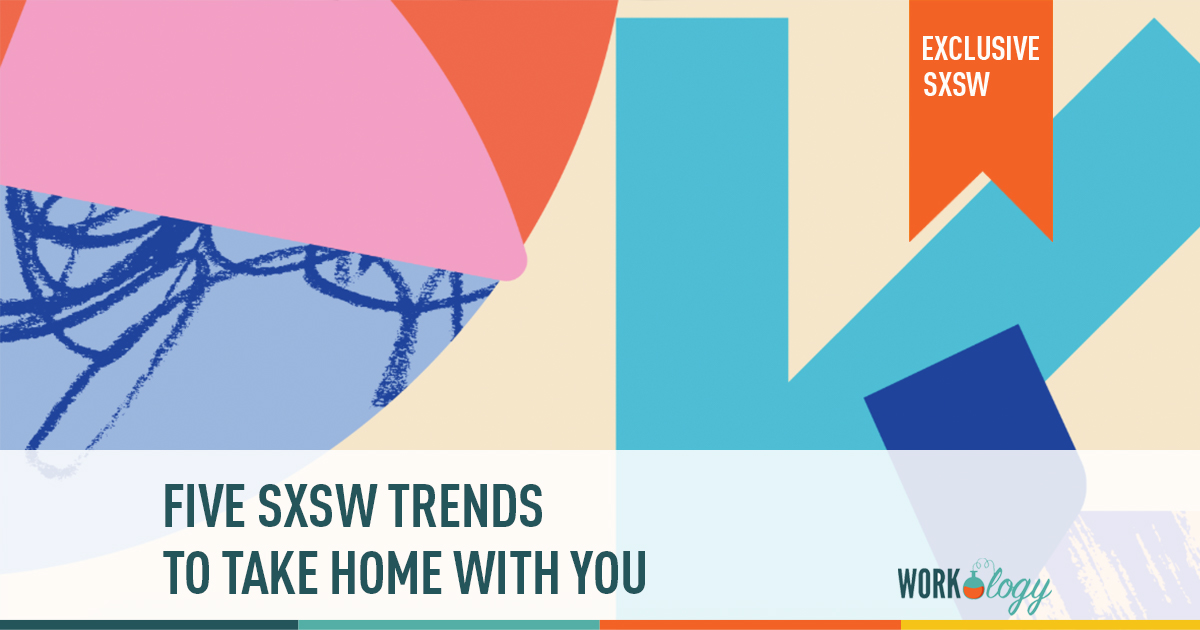 Now that SXSW has wrapped for the year, I thought it would be a good idea to look back at some of the conference’s biggest trends and think about which ones would be the most useful to you, me, and us in the long term. Sometimes ideas or gadgets blow up and have a brief moment in the zeitgeist. They may sound exciting when you first hear about them, but they’re functionally unsound, or based on bad assumptions. But some conference season trends last because they’re based on real shifts in workplace culture and technologies. Here are a few from SXSW 2018 that you should keep thinking about now that you’re back at work.

5 SXSW Trends to Take Home With You

Activism both in and outside the workplace was a huge trend at SXSW this year across every track. That’s not because SXSW attendees suddenly realized they should be talking about these issues more, but a reflection of what’s going on in America today. Since the election there’s been a groundswell of activism from established organizations and new ones, and people acting individually. And as a response we’ve seen more and more brands take public stances on political issues like climate change, immigration, fair voting, and environmental protection.

As a Human Resources or business leader diversity, inclusion and activism are issues that should already be on your radar, but will become even more so over the course of this year. Even the Oscars this year highlighted activist workers and organized – but not collective – bargaining like inclusion riders. What’s your organization’s stance on activism within the workplace and by employees outside of work? And what’s  your stance on the political issues most relevant to your workforce? Make sure you have the answers to these questions ready because they will come up.

I spent much of 2016 and 2017 writing about scandal after scandal in the tech industry. Overwhelmingly, these scandals were caused by irresponsibility and poor corporate citizenship. So it’s gratifying to me that ethics and responsibility was a huge theme in the tech and business tracks at SXSW this year. Startups particularly seem to be waking up to the social impact they have, and realizing that it’s not always – and maybe not usually – good. That change is due, I think, to seeing so many tech unicorns weather scandals regarding their internal culture, hiring practices, and poor data security practices.

With the GDPR set to come into affect in May and Facebook in hot water over its relationship with Cambridge Analytica, ethics and responsibility are already proving to be lasting themes – and ones you should get ahead of. No one wants to run an irresponsible organization. (Or do they?)

Yup, AI again! It’s been a trend every year for the last few years, so maybe it’s not fair to associate it specifically with SXSW – but these last few years have seen more and more practical AI research and development specifically for the workplace. That is, AI research is increasingly focused on creating practical tools we can use today, like incorporating machine learning into tools we’ll use everyday, rather than fundamental research on how we can create real AI.

If you don’t already have an idea of how AI can and will be used in your workplace, you’d better get on it fast, because it’s already here – at least in the boring, no-killer-robot form we have today.

Post-startups? The end of startups? Surely not!

Of course there are about a million new startups formed every ten minutes in America and all over the world but the startup world is changing quickly. For good or ill, startups ain’t what they used to be and the landscape of new startups and even of new venture capital firms is very different from when it was at the start of the Silicon Valley or social startup eras. They’re being founded by different people, in different places, with different sorts of goals. But does that mean the startup era is over? Yes but also no, or at least not exactly.

The startup era as we knew it has ended – fewer graduates foresee themselves working at a startup, or being willing to put-up with the long hours and uncertain pay and benefits that go with it – and the big tech startups that defined the 00s have now grown into dusty, unsexy mega-employers. That graduates are less excited about the prospect of working at a startup, and that the kinds of companies that get funding are changing, are two things that everyone in human resources and business leadership should be paying attention to.

Yup, blockchain. After SXSW I’m well and truly tired of hearing about all the ways that blockchain is going to revolutionize my, your, and everybody’s workplace but suffice it to say that the potential applications of blockchain are legion. Blockchain technologies aren’t so much about cryptocurrencies (which, ha), but about the decentralization and encryption of data – two things that are incredibly important in light of the GDPR and all the data security scandals we saw in 2017.