3 Ways to Build Your Social Jobs Referral and Influence Network 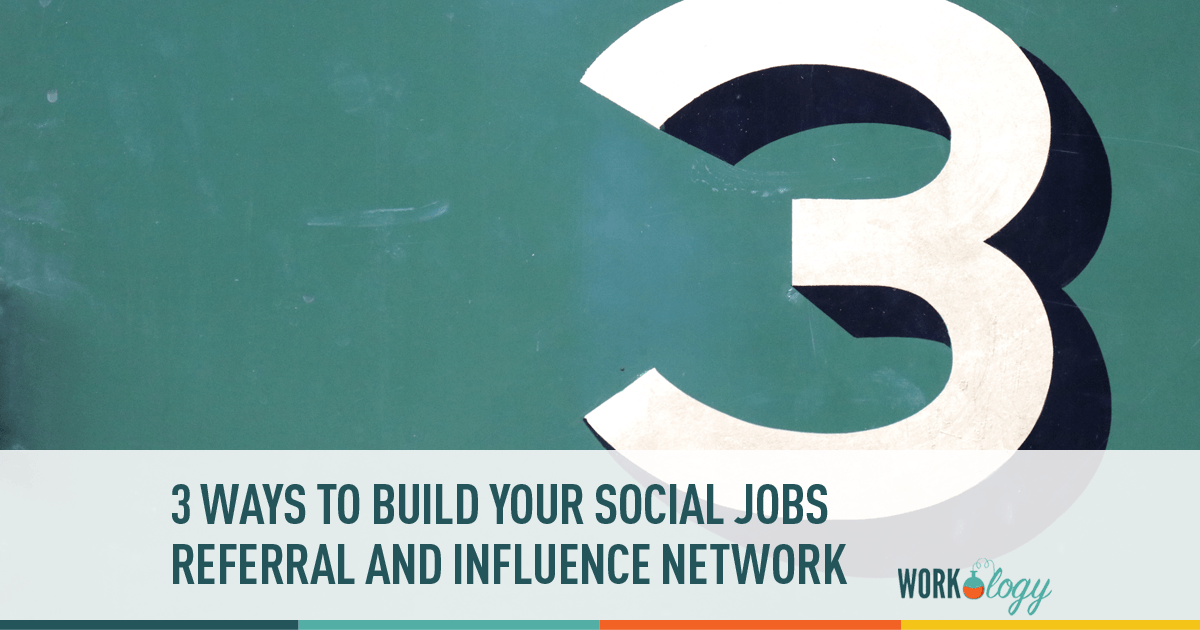 Don’t forget to register for our September webinar, How to Create a Killer Social Recruiting Strategy, on September 26, 2014 from 1-2 p.m. EST.

It’s true that social media can be your best friend or your worst enemy. It’s a powerful tool that can mean big successes for your business when used the right way or a bad reputation if you make a few wrong turns. While it’s true social media has become a game changer for companies that want to increase sales and gain customers, it can also make a big splash in your recruiting efforts. How big of a splash are we talking? Well, statistics show that more than 14 million people used social media to find their last job, which isn’t surprising since 73 percent of employers hired employees using social media.

Harnessing the power of social media doesn’t have to be complicated. To really understand where the power in social media lies, you have to think about its true purpose: connecting people. So if the purpose of maintaining your social presence is at all people related (i.e. selling to people, recruiting people, soliciting feedback from people), then it would only be logical to say that the power is in the people.

People are your greatest asset. The people interacting with your page, your people, your hashtags, your photos and more are the people who will make a difference in growing your network or referrers and influencers. Often times, these can be the very candidates you recruit or interview. In a 2012 Candidate Experience Survey, job seekers admitted that they share the good, the bad and the ugly during their job search. More than 73 percent of job seekers indicated they would share positive hiring news and experiences, while 60 percent said they would share negative experiences. Though the positive tends to outweigh the negative, the negative can bring you to back to reality quicker than you can say “Thanks for your interest, but we’ve decided to go a different direction.”

Although negative responses are always a possibility, don’t let fear of them keep you from taking advantage of social media for recruiting and hiring. Once you’ve built a strong network of influencers and referrals, you’ll see what an asset it can be. Take a look at these three ways to build your social referral and influence network.

Be funny, be ironic, be innovative, be informative – just be something. Part of attracting influencers to join your social network is providing something of value for them. Interacting and posting jobs may be direct outreaches, but creating substance people care about, even if it’s just for the latest tech news or a laugh, can be an indirect way to grow your virtual social circles.

While successful recruiting through social media is one of the main reasons for increasing your referral and influencer network, you have to start somewhere. The more you recruit, the more you’ll grow your networks. Recruiting doesn’t always have to mean posting a job or only interacting with people in relation to a specific position. Recruiting can include the majority of the interacting you do on social, from commenting on an industry blog on LinkedIn to congratulating a Twitter follower on their recent graduation. It could also include staying in contact with candidates on social media after the interview.

One of the most effective tools for building a far-reaching social network is your employee base. The majority of employees have at least a couple of social media accounts and a few hundred friends. Now imagine that your company’s name and image could be spread in a positive light across those platforms. Jobvite’s 2012 Index revealed that employees referred by someone inside the company stay longer than non-referrals and are typically hired 55 percent quicker than those who came through a career site. Referrals have always been a major part of hiring, but using social media to build referrals can be more effective than you every imagined.

How are you building your social networks? Let us know in the comments section below.

Kimberley Kasper is the Chief Marketing Officer for Jobvite and has more than 20 years of marketing experience delivering bottom line results for leading B2B brands. You can connect with her on LinkedIn.