Is Higher Education Just Like a Louis Vuitton Purse? 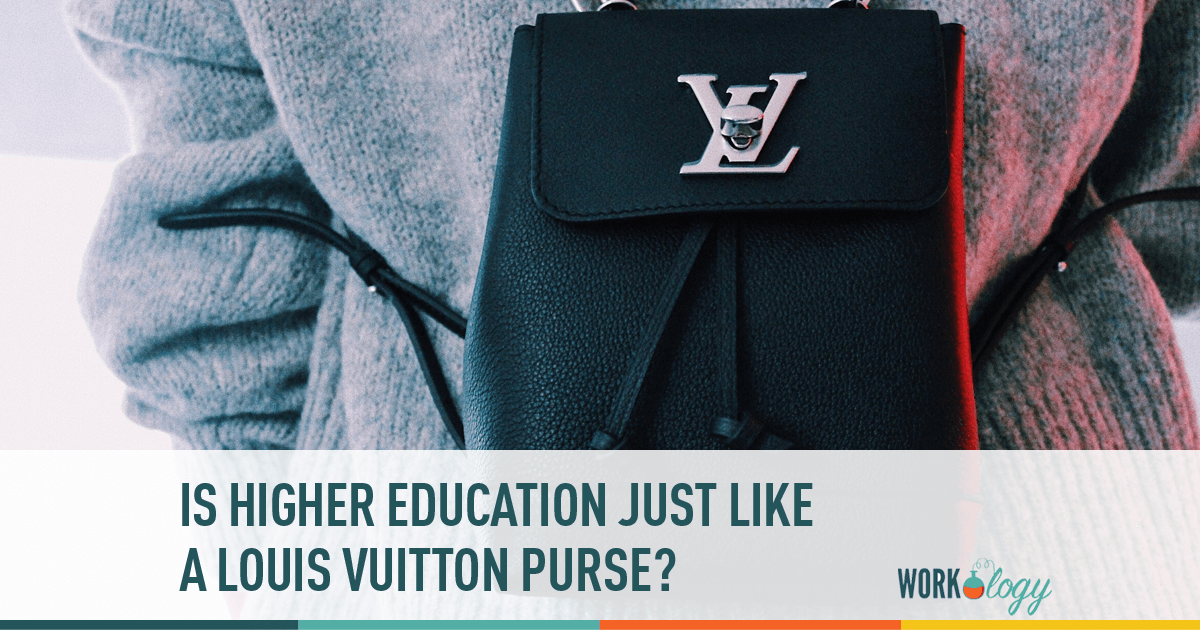 In the age of information, we are now able to educate ourselves online, on our own terms, at our own pace, for a price anyone can afford: free. With this in mind, students are beginning to question the real value of a university degree. Given the rising cost of tuition in addition to the unfathomable expense of living in a city like New York or San Francisco, some are choosing the road less travelled – and it doesn’t include university.

Elearning and Online Adult Learning as Alternative to Higher Education

Consider the prospect of investing fours years at a job where there is room for growth, for an employer who is willing to foster the development of its most promising employees, versus the prospect of four years studying at an institution which will leave you will tens (even hundreds, in some cases) of thousands in debt. Will your employment prospects at the end of those four years necessarily be any better?

Many students are answering no to this question and considering e-learning and other online adult learning courses often offered for a free as a way to learn new skills giving them an advantage in the workplace. For years Stanford has offered their Entrepreneurial Thought Leaders Lecture Series completely free, online.  One of my favorites is Guy Kawasaki’s Enchantment talk as part of this lecture series. These are great for anyone aspiring to be a leader, or working towards a leadership degree.

Students should think of themselves as consumers and choose their field of study accordingly. Not unlike how a woman purchases a new purse.  They evaluate the risk.  Determine the perceived value, and the return on investment.  Many woman forgo the most expensive option because it is a risk.  They are practical and opt for the lower-cost and less risk option.  Dare they risk thousands of dollars are something that won’t last forever.

A medical doctorate provides a clear path to a well-respected and well-paid profession. Such programs are designed to guide students throughout their careers, fostering a smooth transition from student to professional. For this privilege American students will pay costs into the hundreds of thousands. On the other hand, a degree in, say, Philosophy, is the metaphorical equivalent of a finely beaded Louis Vuitton handbag; it may give you a lot of personal satisfaction, but it won’t get you far on a resumé. Young students must consider what sort of return they can expect on their investment and choose their major accordingly.

What is becoming of all those graduates holding the sorts of degrees about which they are queried a hundred times a day, “what are you going to do with that?” Are those with degrees in literature, history and women’s studies faring any better that those with four years of added on-the-job experience and zero debt? Most people would argue for the former and here’s why.

Benefits of a University Program and Education for Professionals

University gives us access to a network of professionals that would be exponentially more difficult to tap into outside the system. It also provides access to internships offered exclusively to students in specific programs. Undoubtedly, given two candidates with equal experience, one of which holds some sort of recognized tertiary education, you can guess who’s getting the job. Though we all harbour ideas about living outside the system, if you want to work inside it, it helps to have qualifications from a globally recognised brand: the university system. Non-traditionally educated employees have to work a lot harder to convince employers of their skills and knowledge, backing it up with loads of on-the-job experience.

A University and College Education Serves Also as Personal Development

The personal development of university students should not be ignored either. According to Professor Steven Schwartz of Macquarie University, “Whatever profession students choose to pursue, they will benefit not only as professionals but also as human beings from being exposed to the greatest works of fiction, history, biography, philosophy and science.” Students get four years to think about what sort of people they want to become and that’s an opportunity that’s hard to refuse.

Without question, there is a world outside the security of the system. You don’t have to look far to find examples of extraordinarily successful businessmen without degrees: Frank Lloyd Wright, Steve Jobs, Bill Gates, Rush Limbaugh, and Facebook’s Mark Zuckerberg. Successful businesswomen, on the other hand…not so much, although surely the 21st century will rectify that. This path is not for the faint of heart. Entrepreneurial spirit is essential for survival outside the great big gates of the status quo.

The real value of higher education then, is for you to decide.  What type of investment in your education are you making and is it an impulse decision or a purchase or purse that benefits you for the long haul.  Does it ever go out of season?

Amy Knapp is the principal of Inside Trak, a job search engine based in Australia.