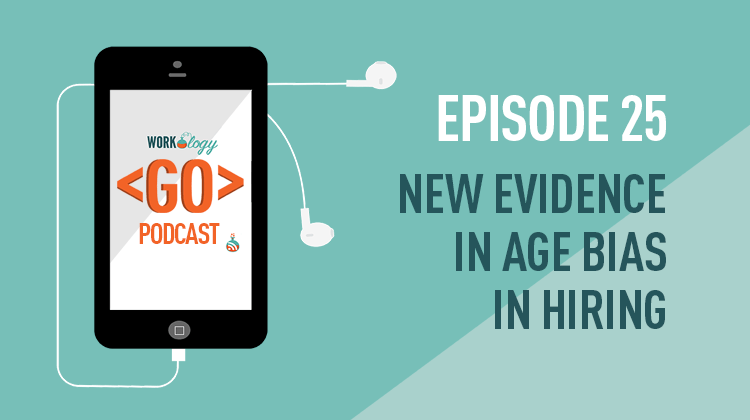 As we understand and know more about the brain thanks to science and also data available in our hiring and HR processes, we are able to understand now more than ever the biases that exist in our workplace especially hiring.

The topic of age bias in hiring is getting more scrutiny after growing concerns on age discrimination hiring practices using ads and targeted campaigns when it comes to social networks like Facebook and LinkedIn. Workers over 50 not just over total about 54 million Americans. These over 50 workers are now facing much more precarious financial circumstances, a legacy of the recession. More than half of workers over 50 lose longtime jobs before they are ready to retire, according to a recent analysis by the Urban Institute and ProPublica.

I sat down and talked with Jo Weech who published an article on LinkedIn that went viral on the subject titled, “Over 40 and Interviewing? Have these things happened to you?”

It has happened and continues to happen to me and apparently thousands of people all over the world. So when Susan Fowler the uber engineer shared her story about sexual harassment that happened to her personally I believe that that resonated with people and I think they found courage to find their own voices and people attribute that to the start of the me too movement and I do believe it’s because she didn’t just write an article about sexism or sexual harassment that she just shared her personal story. So I think that that’s what has resonated.

Well I appreciate you taking the time to share your story because it is happening it is out there and you have more than over almost 10000 comments or thumbs up on the article that’s on LinkedIn. So it has definitely struck a chord with a large group of people. Let’s talk a little bit more about this. Why is this an issue. I I’m over 40 and I think a lot of our podcast listeners are over 40 as well or approaching that number we all likely will be. Why it why is it such a problem.

And it used to be back when pensions were given by companies that a tactic used was to eliminate a person’s position before they could qualify for that pension. So this is more of like a bottom line but it’s not taking into consideration the domino ramifications. And so instead of providing coaching and equipping for more mature workers such as tutorials I’m leveraging today’s social media with cool tools or courses in agile methodology or providing you know even little webinars on how to use giftedness and for example. It’s just easier to eliminate their position and so it was someone who grew up with those tools and technologies. So I encountered one young company whose makeup was 92 percent under the age of 20 including the owners and I was told that a company policy was not to hire anyone for whom they could not provide a clear path. This means that they would never be able to benefit from the wisdom and experience of someone who did it need or want one and who could inform them what a fresh idea was implemented in previous years with some major drawbacks. So why keep reinventing the wheel five different ways without someone there to say why three of them have been epic fails in previous years for the same reasons that are still in existence today.

So I think that really it’s just about not being cognizant of what the lie is for having seasoned people not necessarily seasoned experienced but just even people who are seasoned with life.

This episode’s featured story comes from the New York Times and is titled, “New evidence of age bias in hiring, and a push to fight it.”

Facebook allows for ad targeting based on age, gender, and zip code. This was originally intended for use in consumer ad targeting but has found its’ way into recruiting and hiring. Until recently you could target which Facebook users saw your sponsored post or update based on the language they spoke or read.

This won’t be the last time you hear about age discrimination. We are all not getting younger, myself included. In a federal court in California, a class-action lawsuit against the global accounting firm PwC that claims “substantial evidence of age disparities in hiring” was certified in April. The company noted on its career website and in reports that the average age of its 220,000-member workforce was 27, and that 80 percent of the staff members were millennials (born after 1981).

PwC responded that the company’s “hiring practices are merit-based and have nothing to do with age.” It added, “The plaintiffs’ accusations are false, and we will prove that in court.”

I’m sure we will be seeing more lawsuits like the one against PwC in the future.

New Evidence of Age Bias in Hiring, and a Push to Fight It