Your future employees are texting fools. Are you prepared? 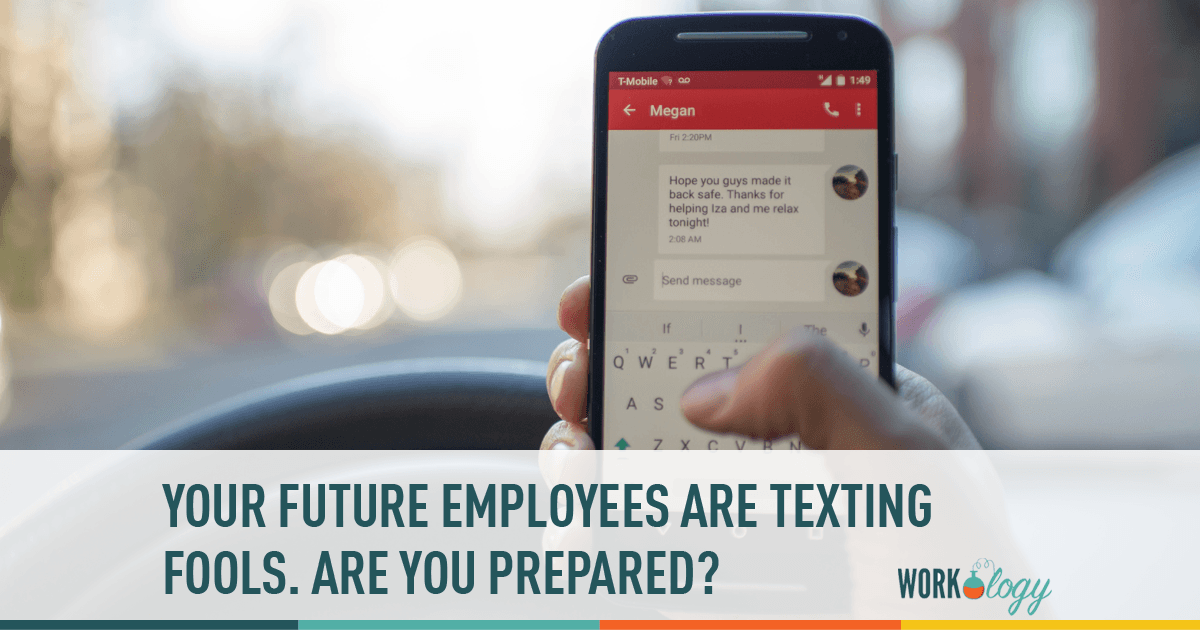 When email was introduced in 1972 it took a while for it to catch on. Its early use was for governmental, educational and military use. Eventually it made its way to personal use and business use. Many people could not imagine this replacing written or typed memos that were sent through a company’s mailroom. Anyone remember envelopes marked confidential? However, email was quickly adapted and no one can imagine a world without email for messages sent internally or most especially externally. The old postal method we derisively call “snail mail.” For many it has not only become the most accepted method of communication but the ONLY method of communication.

HR had to adapt to email and learn to use it to communicate with employees. Much of HRs business is accomplished through documents and forms being sent as attachments to email. Even the government has recognized the electronic viability of electronic communication and forms.

What if that changed?

What would we do if suddenly we had a cohort of employees who did not use email? They didn’t like and they didn’t use it. That situation may be coming in the next five years or so. A 2012 Pew Internet study reported that on average teens send 60 text messages a day. Older girls send 100 or so and boys about 50. According to this study:

Did you read that last fact? Only 6% use email, the communication tool used most heavily in a business situation.

Who adapts to whom?

The challenge for businesses is going to be deciding what the proper communication tool is to communicate to these incoming employees. We could try to force this new wave of employees to conform to the business’ way of communicating. After all that is how the baby boomer and Gen Xers communicate. Gen Ys use email too but to a lesser extent. According to one article “Recent surveys show that, like voice mail and snail mail before it, e-mail use is declining among younger millennials in favour of interacting on social networks and by text and instant messaging.” This group is leading the move toward communication by texting that the next generation will drive as they enter the workforce.

Businesses, led by HR communication, will be forced to adapt to this new method of communication, while holding onto the legacy email systems. If you are a student of history you know that new generations eventually win out in changing systems as opposed to the older generation forcing the new generation to adopt the “old” way.

Best to be prepared

Since it is already beginning and will be definitely arriving in 5 to 8 years it would behoove HR departments to get prepared. It is important to figure out how HR will communicate via text messaging. What will have to be put in place in your business in order for you to make the most of this communication? What training will have to be done? What protocols will have to be developed? What security issues will have to be solved?

I know this sounds like a lot of work, but better to be working on it now rather than playing catch-up. After all isn’t being prepared what being a strategic partner is all about?