You Can Learn New Tricks at Any Age 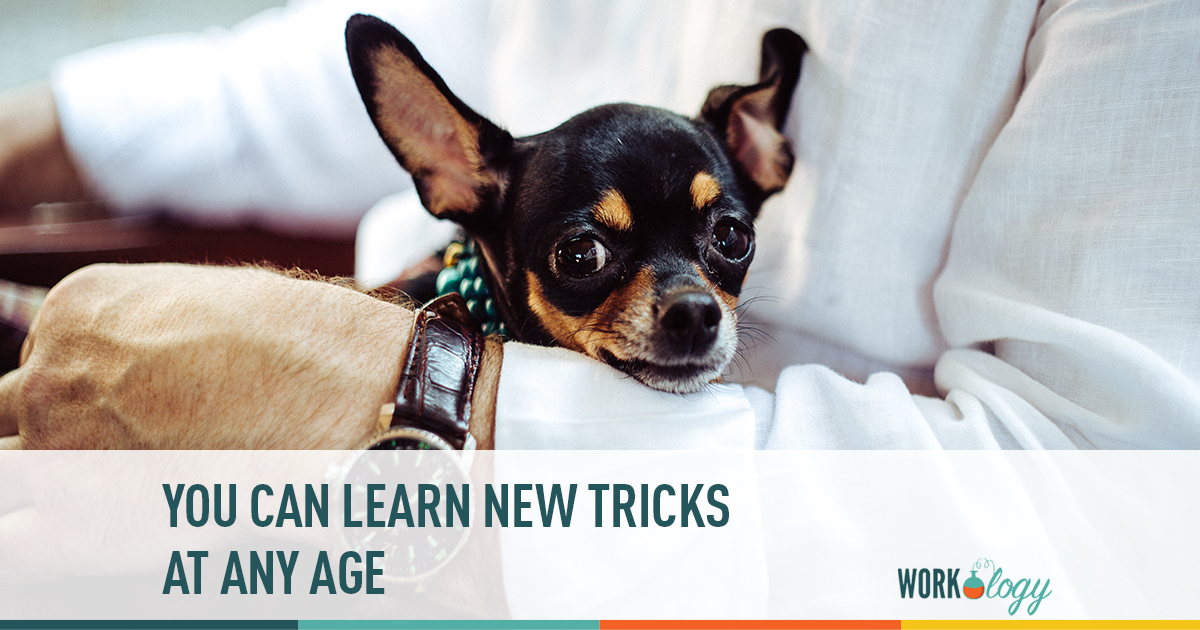 I hear this a lot from people dismissing nasty comments by their older relatives. He’s “old,” with one foot in the grave, and he wouldn’t learn anything from me confronting him anyway. So what’s the point?

This is just one side of a much broader cluster of stereotype about seniors. If they’re bad people, so what, they can’t learn better. If they’re good people, that’s cute, but who cares — they’re old and irrelevant. And if they’re struggling to keep up with a world that’s changing too quickly for them, well, that’s normal, isn’t it? Just let them fade away. Packed into these stereotypes is a series of assumptions about age: 1) that older people are incompetent; 2) that older people can’t learn new skills and ideas; 3) that once you hit retirement age it’s a swift crumbling of body and mind into uselessness.

All of these are wrong and to be frank, ridiculous.

Retirement was first introduced in Germany in 1889. Before the advent of an official retirement age and accompanying pensions, working class people were expected to work until death, or, if their family was better off, slowly reduce their work hours as their children took over breadwinning. Wealthier people then were more likely to be able to fully retire, as we understand it today, and that remains the case now. Wealth is one of the most significant factors in who retires early and who retires fully (that is, does not supplement benefits or pension with part time work).

65 is now the normal retirement age in many countries, with employment levels for older workers slowly dropping off as they approach this age. In addition to wealth, which I mentioned about, health is the other most significant factor in who retires and when — those who are in poor health or living with physical disabilities often retire early, simply because it’s a necessity. But depending on how robust pensions and benefits are, a large percentage of workers may continue to participate in the workforce after age 65 — about 10% in the UK and 20% in the US. This over 65 working population includes wealthy workers who want to continue with their career, those who’ve started a second (or third) career in retirement, and those who are simply struggling to make ends meet.

People don’t retire because they are worn out and useless — dusty old machines of productivity that are no longer worth servicing and updating — they retire so that they can, hopefully, enjoy this next phase of their life in greater comfort, having worked hard their whole lives. It’s not that people over 65 can’t keep working, but that we as a society have decided that they shouldn’t have to. But somehow we’ve conflated “unproductive” (i.e no longer working) with “useless” and even “decrepit,” as though the moment one turns 65 they’re preserved in amber, no longer contributing to society and incapable of keeping up with it.

More Over 50 People Are Staying In the Workforce

But these days, more people over 50 are staying in the workforce. Since 2015 the unemployment rate for older workers has declined, thanks to continued demand for their skills and too, thanks to their increasing overall health. Boomers who are highly educated and experienced stand a good chance of continuing in their jobs or finding new employment — if they want to keep working. The prospects aren’t quite as good for less educated boomers as they enter their retirement years, but as service jobs continue to outpace jobs in manufacturing and the resource sector, their years of experience serve them well.

They have years of experience dealing with people, mediating disputes among coworkers, and coming up with solutions for clients, unlike many younger professionals. They can also offer a unique customer service perspective that’s perfect for older customers — instead of condescension, they can approach older customers on equal footing. The basic competencies are not only in place, but rock solid — it’s just a matter of learning new skills for new jobs. And as Mike Haberman pointed out last month, the future of training will depend on workers who can deeply internalize basic competencies and then quickly build on them to learn new skills. Many older workers — to the surprise of many of my fellow millennials — are well prepared for the ongoing transformation of the workplace. After all, it’s been changing rapidly, becoming more automated and integrating technology at every level, throughout their whole working lives.

You Can Teach An Old Dog New Tricks

People aren’t dogs. But just in case you’re still hung up on that saying — it’s a lie. You can teach old dogs new tricks.

Boomers are a vital part of the workforce and seniors are a vital part of society. We need to stop imagining that people disappear once they reach their senior years, or even worse, become an annoying burden. We can start by recognizing that all people, at all ages, are capable of learning new ideas and skills, of experiencing profound personal transformations. That kids, seniors, prime age workers, teens are all just people. Here’s the thing, humans are social animals who learn and change and take on new challenges at every stage of their life. Your older colleagues absolutely can learn that new system. Your awful uncle can certainly learn to be a better person. And your Grandmother can in fact learn to use new technology and come to value it.

Should more older workers be continuing on in the workforce, though? That’s a topic for another blog, but part of valuing people of all ages is recognizing that they deserve respect and care. Older workers should certainly keep on working — if that’s their choice. But we invented retirement for a reason and those people who are ready to step down should have that choice, along with the pension and benefits that make it possible.