Would A Robot Tax Protect Jobs? 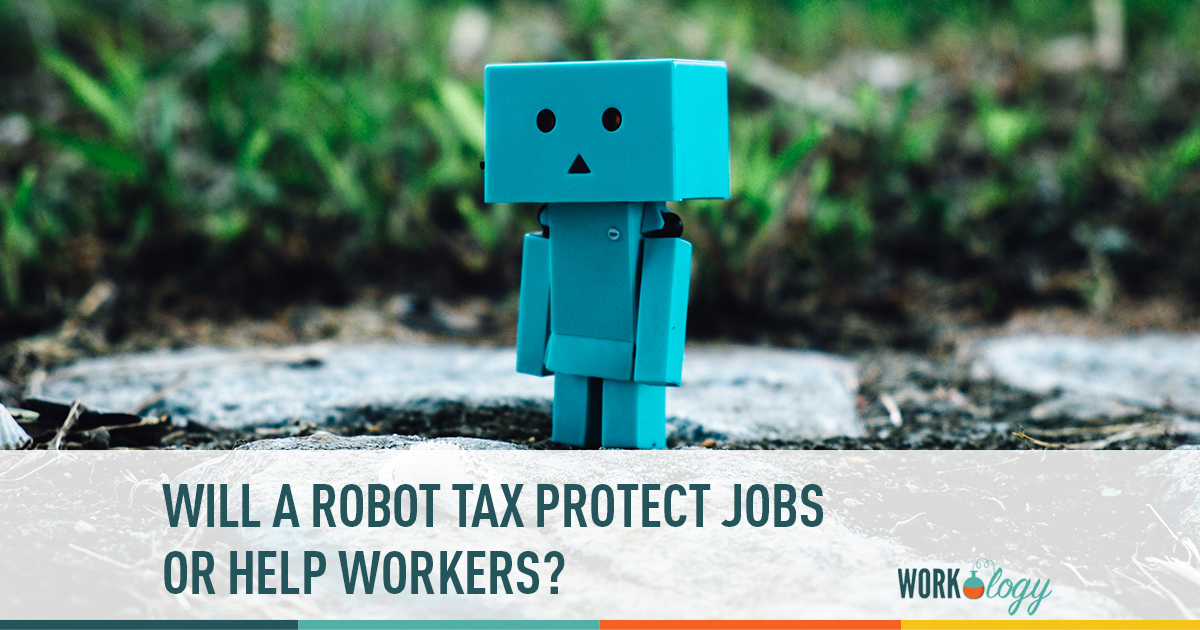 Bill Gates has an interesting proposal to offset the impact of robots on jobs: make them pay tax.

In a March interview with Quartz, Gates pointed out that the increasing pace of automation doesn’t have to lead to a catastrophic disruption of the jobs market. It could just as easily free up labour for humans to take on socially meaningful roles, instead of manual labour that can just as well be done by machines. But in order to facilitate this change – ensuring automation works for and not against the average worker – he suggests taxing robots that take over jobs previously done by humans, then putting that money to work helping people adjust to economic changes.

Of course we are nowhere near the kind of independent, sentient robots that exist in science fiction, so this tax wouldn’t rest on the shoulders of robots as independent beings, but instead would be levied against their owners – the robot tax would be a capital tax. When it comes to taxing businesses we often worry that the real burden of the tax will be pushed onto consumers, but Tech Insider, spoke with Edward Kleinbard, a law and business professor at USC. He argues that a robot tax couldn’t easily be shifted to consumers (or workers), because “capital bears between 75% and 95% of the economic cost of corporation tax, meaning that they can only shift a small part of it onto labor and consumers.”

In that sense, Gates’ idea is quite clever. He frames the problem like this: robots will increase productivity and profits for the benefit of business, but at the expense of workers; in order to make robotification work for us all, businesses must be taxed to contribute to the amelioration of the economic disruption they create. That is, you can’t stop robotification, but you can tax it so that government can work to ensure that the transition is smooth and people are taken care of along the way. And even more importantly for Gates, you can spend that transition period applying all that excess labour to persistent social problems – you can put people to work making life better for people.

The second worry that crops up when a new business tax is proposed is that it will stifle innovation. Gates thinks that innovation in robotics will come anyway, even if a tax were imposed. Not everyone is convinced. At TechCrunch, Steve cousins writes that Gates’ proposal is a tax on innovation, an unfair penalty on companies that push new technologies forward by being early adopters. Instead, he thinks, we should focus on closing loopholes in our existing tax codes and try to smooth the transition toward an increasingly automated economy through universal basic income, or something similar. Universal basic income, wherein all adult citizens are issued a basic income supplement, is one of the more popular solutions that have been proposed to ameliorate economic disruption from automation, but it’s not one I think will likely catch on in the United States.

But Noah Smith, writing at Bloomberg, points out a much trickier aspect of trying to tax robots that replace jobs: it’s very hard to determine which robots are definitively replacing jobs, not augmenting them or creating new ones. All advances in technology both kill and create jobs and robots aren’t any different. They have already eliminated some jobs while creating new ones based around their use, and they, along with AI, are commonly used to augment human work. Even if we decided that a robot tax was the best way to deal with the changes that robotification causes, how do we decided which robots need to be taxed? Are all robots the problem, even when they’re assistive devices that make work easier for disabled employees? What about industrial and transportation robots that put humans at a remove from dangerous work?

If UBI is a policy proposal I just can’t see taking off in the United States, a robot tax is one that I think could go a little further. But the question isn’t “could it be passed” but “would it help” and I’m not sure what the answer is. Would a robot tax protect jobs by making companies more hesitant to take become early adopters of new technologies? Or from a different angle, is a robot tax just a fair contribution from companies to people, as they disrupt the economy by pursuing innovation? And in the end, would the monies raised even be put toward helping people whose jobs are eliminated by robots?

These are complicated questions that can’t be answered in a blog post by non-expert me, but while I won’t try to reform the tax code today, I will say that I’m glad we’re having these conversations, and exploring the profound economic disruptions that automation could bring.