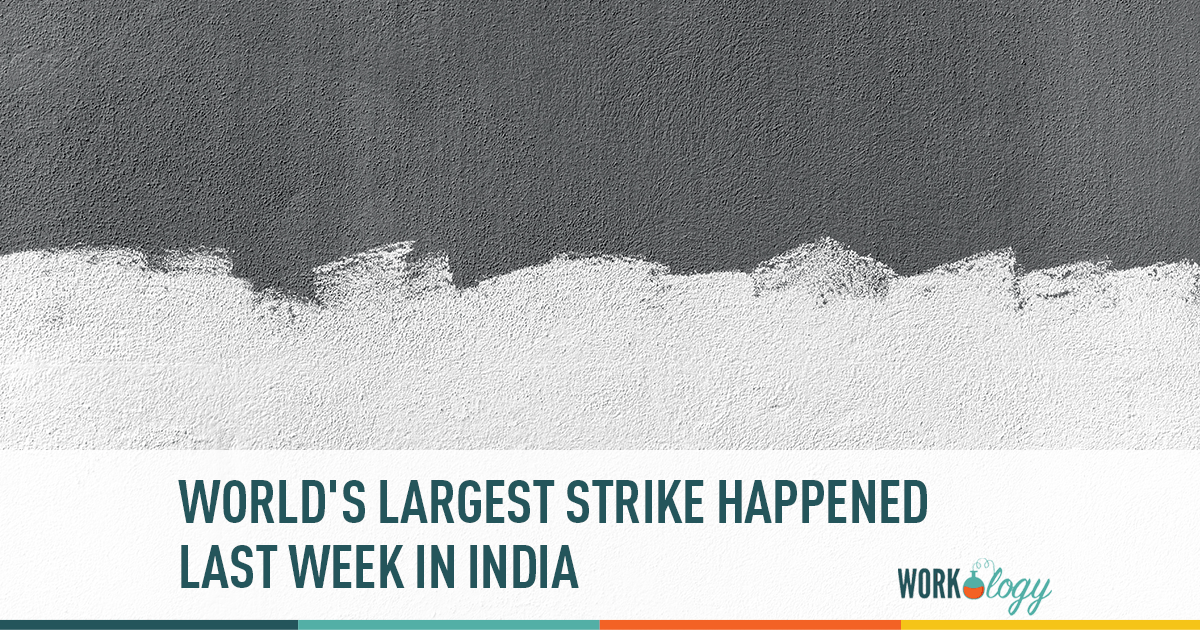 An estimated 150 to 180 million workers went on strike in India on September 2 for 24 hours. The strike, which was centered in Karnataka and Kerala, included workers from several sectors, from manufacturing, to banking, to teachers, transportation workers and other government employees. Because of the scale of the strike, it naturally caused major disruptions in daily life and in the economy, and may have cost as much as 180bn rupees in lost productivity. But the ten trade unions who organized a general strike in response to the Prime Minister Narendra Modi’s economic policies are hoping that disruption will be enough to get attention to their cause.

Prime Minister Modi has pushed for privatization of services, the closure of unproductive factories and selling off government assets. In addition to opposing these plans, the unions want guaranteed health care and pensions and an increase in minimum wage that would double the current wage, which hasn’t kept pace with inflation. Government-labour negotiations have been ongoing and union organizers rejected an offer to raise the minimum wage from $3.70 to $5.20/day, instead of the requested $7.4/dayday, before finally calling for the strike. In addition to their material demands, organizers are calling for better enforcement of labour laws and fair treatment of all workers, including those employed in the informal sector, which is not unionized.

Jayati Ghosh, development economist at Jawaharlal Nehru University, told the Guardian that “less than 4% of workers in India come under labour protection, and even those protections have become more and more eroded. There’s a general sense that instead of targeting poverty [the Modi government is] targeting the poor, and there has been a real running down of spending on essential public services.”

The Indian workforce, approximately 500 million people, is largely unorganized, and because of the ubiquity of informal work, not protected by labour laws. Informal work, that is work in the grey economy that is not subject to contracts, taxation or government monitoring, employs 90% of Indian workers — which is why trade unions are directing attention to the treatment of informal workers. In addition to the political friction between the government and union organizers, Indian workers have been contending with unpaid wages and widespread workplace abuses.

In an increasingly globalized world it’s essential that American recruiters and HR thought leaders understand the economic and labour politics at work outside their borders. The September 2 general strike is the not the first since Prime Minister Modi took office — though it is the largest — and it likely won’t be the last, and that kind of ongoing unrest in one of the world’s biggest economies is something that we should be paying attention to.

Too, many of the complaints of Indian workers will sound familiar to American ears. Movements like Fight for Fifteen, which fights to raise the minimum wage to $15/hour and has organized multiple strikes, and ongoing battles between government and unions in Wisconsin and elsewhere, have become increasingly common in the last few years. Like Indian workers, American workers have pointed out that minimum wages have not kept pace with inflation and that union-busting and globalization have made things harder for less skilled workers. Given the trajectory of the American economy, no matter who wins the election in November, we can expect to see more protests and strikes — just as we can expect to see more of the same in India and elsewhere.