Workers Gave Up $52 Billion In Vacation, is it Time to End 20th Century Vacation Policies? 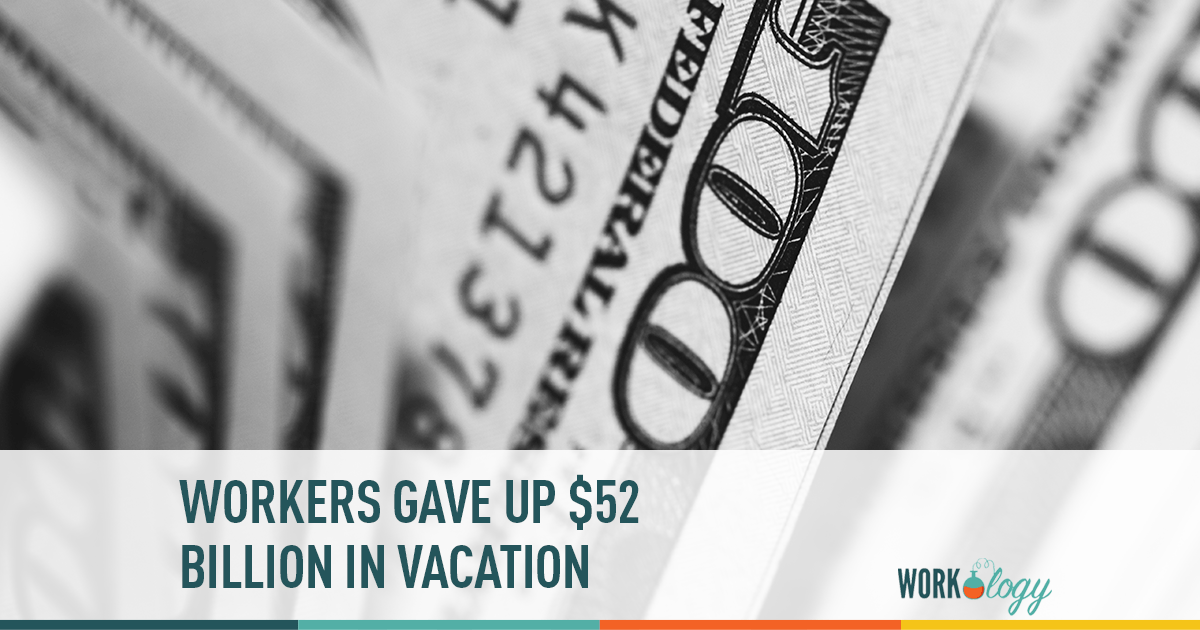 In 2013 US workers apparently gave up $52.4 billion in unused vacation time, forfeiting 169 million paid days off. Employees who take less vacation feel more stress at work than their more rested counterparts and were not promoted at any faster rate for their increased workload. Many companies are offering “unlimited” vacation plans now, but are they any better? Some argue that they’re a trick to make employees work less. I would counter that the number of days a person takes doesn’t matter as long as they get the work done and feel supported by the company.

It seems that not only is our workweek longer now, the work year is longer as well. According to a report by Oxford Economics for the US Travel Association, US workers are on average taking 4.3 less days of vacation now than we did between 1976 and 2000 (20.3 vs 16.0) which is 4.9 days less than what is earned (20.9 non sick days or federal holidays). Higher income earners left more of their PTO days unused than lower income earners (6.5 days for >$150k salary vs 3.7 days for <$29k salary).

On its face, an unlimited policy sounds much more caring and supportive of a workers needs and so the companies implementing them are growing (Virgin, HubSpot, The Motley Fool, Netflix, IBM and many more). Employees get to choose whether they want 10 days off or 30, or even more, whatever they need to feel rested and energized for work. Mismanagement, or miscommunications about the policy though can lead to its own troubles. “Take as much time as YOU want, we won’t be watching you.” This statement, often repeated by companies when newly implementing an unlimited vacation policy can actually lead to greater performance anxiety for fears of secretly being watched. According to a study by GlassDoor, 61% of employees work while on their vacation.

If employees are going to work while on vacation, will they truly feel rested when they come back or will they be more stressed and less productive? What about the dread of opening work email after returning to work from vacation? How many days are lost due to sorting and responding? Daimler, the parent company of Mercedes Benz has a really great policy that deletes incoming email when an employee turns on their vacation auto-responder. The company says that the response has been “about 99% positive” because those emailing into the company would like to have that policy as well.

Not everyone is a fan of unlimited policies though. In a recent essay, Tim Sackett, President of HRU Technical Resources said that these policies tend to drive employees to take fewer days off, not more. He proposes a 5-week vacation policy instead which he estimates will cover 99% of the working world.

I agree, 5 weeks would cover just about everyone’s vacation needs in the world, excluding maternity/paternity leave(10.7% of respondents in the USTA survey had more than 31 days of PTO). One thing that an unlimited vacation policy does do though, is take away the sense of loss of those 4.3 days of PTO that US workers are not currently using. This chart from the USTA study shows a pretty normal distribution in the number of PTO days taken with the top of the bell curve being right around 2 weeks.

Amount of PTO Taken by US Workers

Instead of having a cap, I propose we shift the bell curve to the right. Have a minimum of 10 days off and then allow employees to take whatever extra time they need off except for major deadlines or required in-office days. If the employee feels engaged with their work, they will not abuse the system and be more productive upon their return. Habitual non-performers should be let go regardless of how much vacation they have taken in a given period.  I think its time that we scrap the myriad forms of PTO (FMLA, sick leave, PTO banks, etc) that were developed in the 1900s and move towards a more human-centric and results oriented workforce.