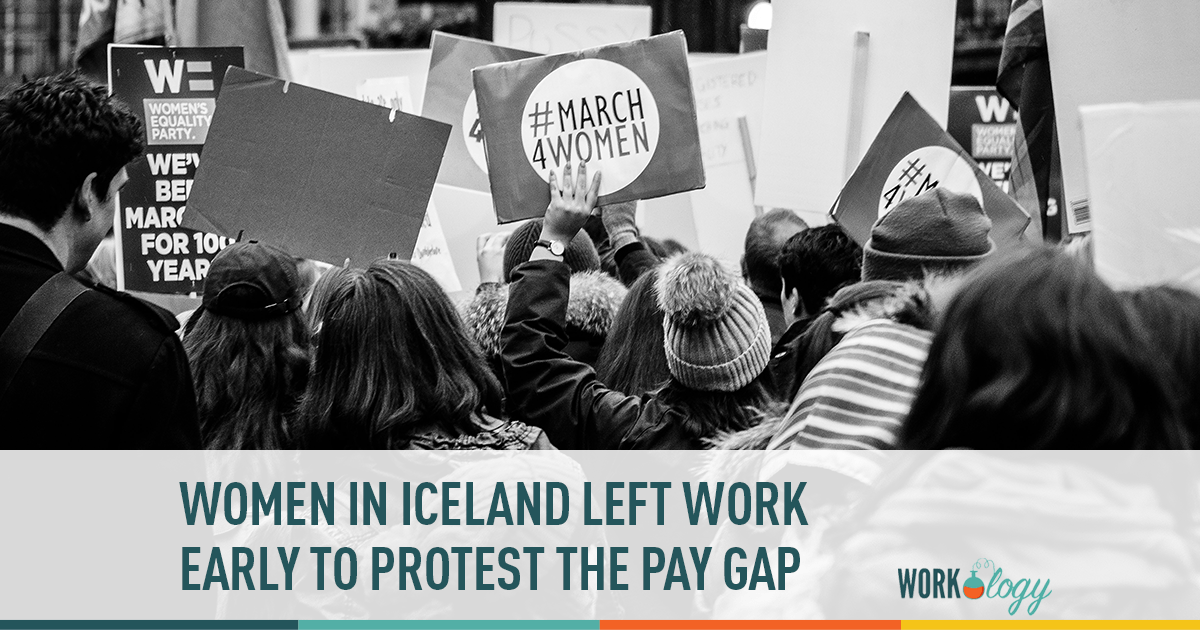 Last week women in Reykjavik, Iceland left work two hours and twenty-two minutes early to protest the country’s 30% unadjusted pay gap. That extra time off works out to 30% of the day, the time that, according to the protesters, Icelandic women are working for free while Icelandic men are still being paid.

The protest was big — you can gauge just how big by the video below — and effective, garnering loads of domestic and international press. That’s in part thanks to its framing — 30% for 30% is a great message and the demonstration not only deprived employers of a huge part of its workforce, but also assembled a huge group of women, publicly demanding change.

Women in Iceland come together to fight for equality, shouting OUT #kvennafrí #womensrights pic.twitter.com/vTPFwfSoVk

There are two things about the protest I find interesting: 1) That this isn’t a common tactic globally to bring attention to the pay gap; and 2) that this big protest took place in Iceland, a country consistently ranked by the World Economic Forum as one of the most economically equitable for women.

I think it’s fair to say that a gap in economic opportunity and participation follows a gap in political empowerment, and vice versa. Icelandic women organized such a powerful protest because they are already politically and economically organized and empowered, to a much greater extent than they are in the US.

This year WEF predicted that at our current rate of progress, it would take 170 years to close the gender pap gap globally. Over the previous decade there’s been progress in the United States and elsewhere, but the pay gap has only shrunk globally by 4%. And as I reported in October, in some high GDP countries the pay gap has actually widened. This form of protest is a particularly good way to make the pay gap visible, and it’s one that can be applied anywhere women can organize protest. As Uri Friedman put it in The Atlantic,

Plus, since women’s-rights organizations and labor unions in Iceland have organized the demonstration in the past, we can actually measure, in minutes, the country’s advances on pay equity. On October 24, 2005, women in Iceland left work at 2:08 PM. On October 24, 2010, they departed at 2:25.”

But even in Iceland, where, thanks to activism and government action, so much progress has been made in closing the pay gap, women still don’t make equal pay for equal work and don’t have access the same opportunities in the workplace. That just goes to show that sexism, in culture and the workplace, is as persistent as it is pernicious.