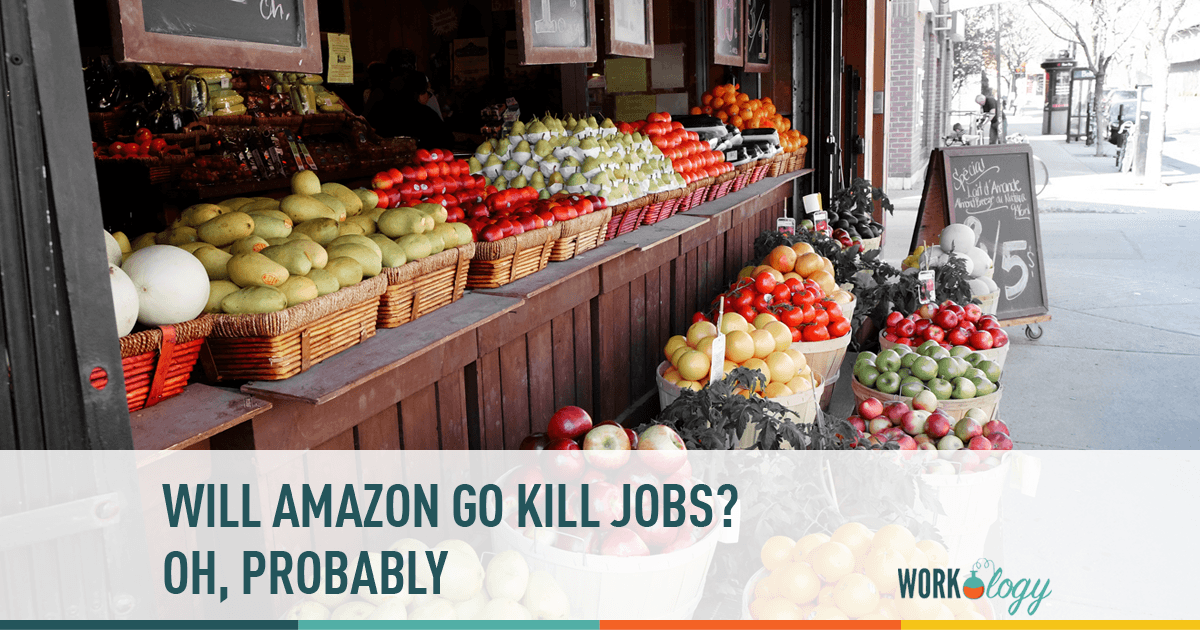 Recently Amazon announced that it would test a new product meant to allow shoppers to skip long lines in stores and pay on their phones without going through a complicated online transaction. Amazon Go, currently being tested in one Seattle area grocery store and only available to Amazon employees, works like this: shoppers tap their phones at a designated checkpoint upon entering the story, fill up their baskets, and then tap it again when they leave. A combination of cameras, microphones, pressure sensors and product tagging compiles a list of what you took from the store and you are then billed through the Amazon Go app. No purchase approval is required by shoppers, and no human contact either.

USA Today’s Elizabeth Weise, who looked into a related 2014 patent filed by Amazon, said that the technology Amazon has developed to make human-free shopping possible is similar to what’s being used on self-driving cars.

“According to the patent, each customer entering the store would be tagged as they entered. In Amazon’s video, they tag their smartphone, which contains the Amazon Go app, as they walk in.

That then allows the store’s surveillance system to identify the customer so that it can track them as they move throughout the space. Cameras pick up images of when they stop in front of shelves, what items they picked up and whether the item stayed in their hand or went back to the shelf.”

This is a great time to launch a service promising to help consumers skip long lines in retail stores. With holiday shopping ramping up, our time spent waiting in soul-killingly long lines, often weighed down by heavy purchases and winter clothing, only increases. Americans spend about 37 billion hours per year waiting in lines and overestimate our time spent in those line by 36%. It’s safe to say that we hate lines. And though generally we are pretty good about sticking it out, and politely sticking to our place in the queue, many of us would overjoyed to never stand in line again. But although the holidays is the perfect time to announce the project, consumers shouldn’t expect to have a chance to try it out for themselves this year or for many years to come.

Rolling Out New Technology Is Expensive and Slow

Although the kinds of technology Amazon is using in its Go project are getting cheaper, the cost of setting up such a system would be prohibitive both for small businesses and for large chains that would need to retrofit hundreds of stores. Many small businesses struggle with computerized inventory — it’s a lot of work to scan in thousands of low sales products — let alone implementing RFID tracking and smartphone payments. Retail, as an industry, is not exactly quick to adopt new technologies even when they promise new conveniences to the customer, because taking a risk on an immature inventory and point of sale product could have grave consequences for their business. Smooth transactions and product tracking are kind of crucial to their bottom line.

And although in the long term, more automation and resulting job losses in retail is certain, the actual implementation process is complicated on the back and front ends — it’s not just an expensive hassle to roll out new technology, it also requires businesses to educate customers about these new technologies. When’s the last time you saw someone scream at a self-checkout or parking meter? Yesterday? Today? When I worked in retail, one the of the biggest challenges of updating the company’s technology wasn’t the roll out and it wasn’t training employees on new processes, it was explaining to the customer why things were changing and why that change didn’t mean the sky was falling. If this Amazon Go test works out, I would expect to see the technology adopted first in big population centers where self-checkout, smartphone payment and similar products already have high market penetration. That is, expect to see Amazon Go available only in places where customers have already gotten used to  shopping with less human interaction.

Amazon Go Will Kill Jobs, Probably, But Not Right Away

I’m emphasizing human interaction because cutting out the line essentially means cutting out the cashier. If Amazon Go and similar products are a success, they stand to kill millions of retail jobs. Almost 6% of Americans work as retail cashiers, and that’s not just teenagers. Retail sales and cashiering, two of America’s most common jobs, have low average wages, lack job and schedule security, and workers in these occupations have low average education — but an increasing number of adults work in retail and they’re doing it for the long haul. While retail hiring didn’t expand significantly in November, the sector has had strong growth for much of 2016. People go where the work is, and in America and other developing economies, that means service jobs for low education workers.

Automation in retail will have an impact on the overall employment outlook in the US, but the question is when will that impact hit and what will it look like. While self-checkouts have eliminated some cashier jobs, they haven’t decreased retail employment levels overall. Their addition to the workplace required more employees working in other parts of the business. Too, the inefficiency of the technology — so slow, my god, so slow — has meant that it’s not been as much of a job killer as was originally predicted. As cool as Amazon Go sounds, I can already think of dozens of ways to exploit and get around it. I don’t think we should be too worried about Amazon Go specifically. It’ll be years before we see it make an impact in the retail market and there’s no guarantee that consumers will even take to it. However, we should consider Amazon Go an opportunity to talk about the changes ahead for the American job market. Automation and the move toward low paying service work are two trends that we must all grapple with. Will Amazon Go or something like it kill jobs? Eventually, yes, it probably will, but what that means for the economy isn’t a forgone conclusion.