Why You Need Flexibility Not Disruption 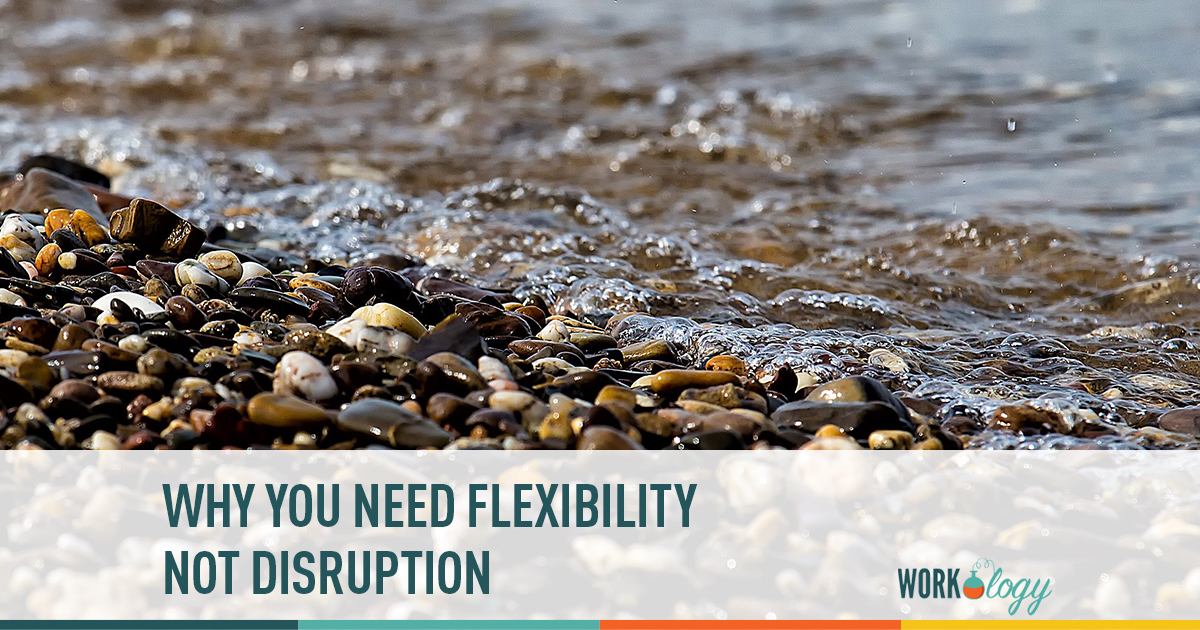 “We’re a small, disruptive team working to create products that consumers don’t even know they need.”

“We want our workplace to be as unconventional as our products. We embrace disruption.”

Ugh, what do these kinds of statements even mean? No wait, I’ve got this. When a company describes itself this way in corporate materials intended for customers, clients or potential candidates, it wants you to know that it understands the importance of change, and embraces it as a key value. The problem is that change in of itself — disruption, as the cool kids call it — has no real value in of itself.

“Disruptive” has become more than a statement about the nature of startups that find unusual niches in established industries, thereby upsetting the whole earnings applecart; it’s become a value, a guiding light for many in Silicon Valley and beyond. Disruptive means going against the grain. It means innovation and excitement. It means smaller, leaner, cooler companies. It means… actually, not much of anything at all.

What Is the Value of Disruption?

In a social or political sense, disruption is valuable when it shakes up an existing power structure, allowing previously silenced voices to be heard. In a business sense, disruption creates value for businesses and consumers in making space for new ways to compete in a stratified market. It’s change. A momentary but dramatic shake up that moves things out of their usual configuration into something new. Not all social disruptions bring positive change to a society and not all economic disruptions work out for businesses or consumers in the end. And obviously not all management experiments bring value to the organization. Disruption offers opportunities that we can leverage for positive change or something much more destructive — but disruption itself isn’t good or bad.

It’s valuable only insofar as it creates new opportunities by disrupting the status quo. The status quo, on the other hand, is valuable insofar as it creates opportunities for us to build solid foundations. Change for the sake of change and tradition for the sake of tradition are both more habitual than thoughtful, and neither “change” nor “tradition” have actual value in and of themselves. Motion and the lack thereof isn’t a management philosophy; it’s just physics, which doesn’t have much to say about managing people. People are more than just matter and energy.

When it comes to managing people, neither “change” nor “tradition” are useful ways to describe what we do. A management plan based around disruption just sounds like a hectic mess, doesn’t it? Conversely, a management plan based around tradition sounds like the worst of old boys club nonsense. It’s what we do with the opportunities that disruption affords us — creating more flexible workplaces, expanding benefits, or experimenting with remote, contingent teams — that matters.

The Inevitable McDonaldsification of Disruptive Organizations

As an organizing principle, disruption quickly gives way to the status quo. Disruptive, remember, is really all about creating opportunities for success. When disruptive companies are successful they quickly become the new establishment, a status quo they fiercely defend. Becoming the new normal means that the character of the workplace changes too. As startups mature and grow, it becomes harder for them to stay agile and maintain that “quirky,” “hard-driving” character they once cherished. That tiny team grows and splits into multiple teams, including marketing, HR and maybe even legal departments. The office slide disappears in favour of a generous parental leave program. Suddenly disruption looks less attractive than market dominance, doesn’t it? And unusual workplace dynamics give way to the very boring usual ones, that allow your team members to have a life outside the company. Your favourite off-beat startup of today, if it’s successful, will soon look like any other employer. In fact, it might look a lot like McDonalds.

Michael Keaton who stars in the new film The Founder, a biopic of Ray Kroc, the man behind McDonalds’ franchising success, says that the startups of today could learn a lot from the trajectory of the once tiny burger chain. When McDonalds made its first big push to expand, it was a disruptive startup that changed the food game across the country. Now it’s a giant international chain that’s struggling to keep up with changes in consumer tastes. Keaton’s advice — be tough, know when to pivot — is great, if a bit cliche (and also good advice for the McDonalds of today.) But while the comparison to contemporary startups is apt, it might make some people, who’ve bought into the Valley’s disruptive ideals, a little uncomfortable. Who wants advice from McDonalds? Yet although success in 2017 looks quite different from how it did in Ray Kroc’s day (the world’s most successful tech companies have much less employees that the world’s most average and uninteresting burger chains, for example), there are simple truth’s in Kroc’s advice via Keaton. And there’s a simple truth in the company’s history: disruptive organizations will inevitably ossify with success.

Disruption is about first getting your foot in the door and then walking through it. Once the room is yours, you close the door behind you.

Disruption isn’t a management philosophy; it’s step one of a much larger plan.

Why It’s Flexibility, Not Disruption You Need

On a recent episode of the Recode Decode podcast, Trivago co-founder and CEO Rolf Schrömgens said that companies of a certain size find innovation difficult because of two factors: 1) noise, 2) ego. Although Trivago is now the dominant player in its space — matching travellers with accommodations — it’s still a relatively small company, and one that continues to have a disruptive affect on the hotel marketplace. But as Schrömgens makes clear, it’s a purposeful disruption. The end goal is to build a company capable of quickly responding to the needs of consumers, solving one basic problem: how can they match you, the customer, with your perfect hotel? His conversation with Recode Decode host Kara Swisher is incredibly interesting; not just because of their exploration of how Trivago approaches this problem, but because of how the company’s management philosophy plays into this. The emphasis is less on disruption than on flexibility, both within teams and the organization as a whole. The thing about flexibility — organizational give and slack — is that, unlike disruption, it is something that you can keep up.

The leadership at Trivago decided early on that it wasn’t just ossification of ideas that was the enemy of innovation, but ossification of power. Schrömgens says that while the settling of a company into a rigid structure with slow changing best practices can make it harder to pursue interesting ideas or experiment, what’s even worse is concentration of power and the resulting gatekeeping that goes with it. Do you really need a complex network of power and authority to keep your company running smoothly? What’s more important, the idea or the channel through which it arrived? Flexible workplaces, with fewer distinctions between managers and employees and an openness to different kinds of workflows, have an easier time of identifying and developing interesting new ideas.

Thought leaders talk a lot about empowering top talent but this should be more than a feeling of recognition and being valued. Actually empowering them, and all of your employees, to share ideas and try new things is a good start to welcoming innovation in your workplace. It’s also a way of looking at managing people that moves beyond the change/not change dichotomy to something more humane; and something you can build a successful management philosophy of off.