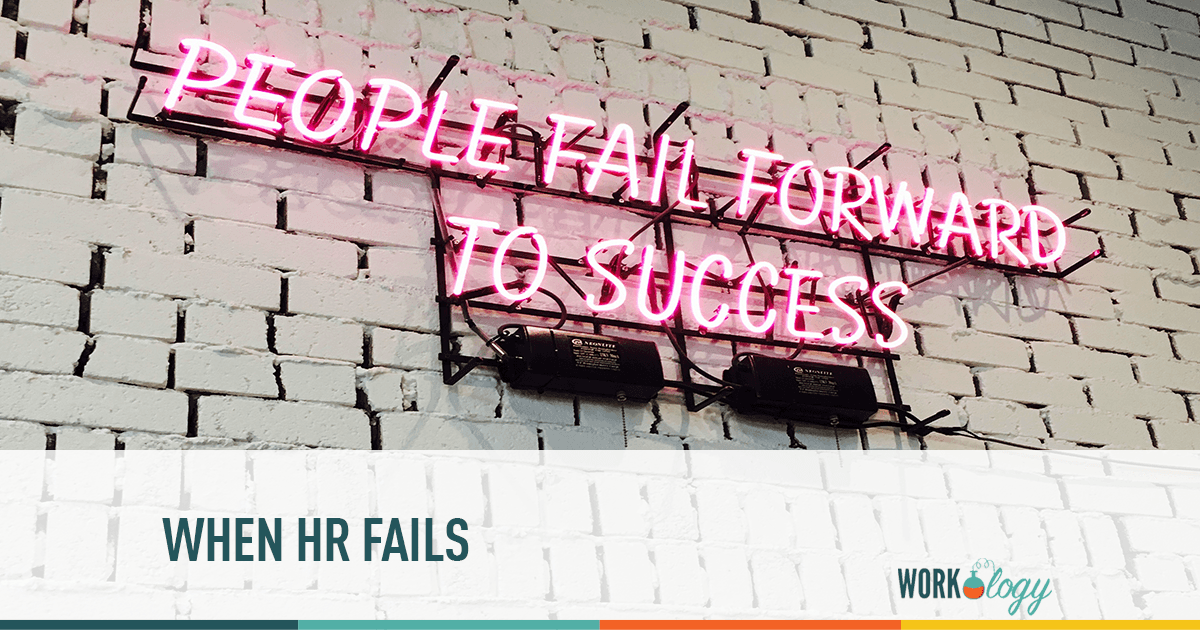 We don’t like to admit that, occasionally, we fail in our roles in HR. I have been guilty of it a few times over the years. One thing I can say is that I never maliciously failed, but it happens. When it does, I think it’s important to own it and do your best to learn from it. There is no shame in failing, only in failing to benefit from it.

How I Learned From a High Potential Program Failure

Sometimes you don’t realize it while it is happening. When I worked at Leviton Manufacturing as their head of HR, I failed twice to implement a High Potential program. The first time, it failed because I didn’t gain buy-in. I steamrolled a program in without most of my senior team having a say. In this way, I sabotaged myself in my expediency to deliver a program. The follow-up attempt failed too. In this instance, it was too low and too wide in scope. I didn’t evaluate the bandwidth properly.

So, two failures on the same project. This came on the heels of my being awarded SHRM’s Human Capital Leader of the Year award nationally. I thought I was a rock star and could do no wrong. But success is fleeting, and you must do your due diligence regardless of your stature.

It was an important lesson for me that I have never forgotten. I am competitive by nature in fact my number two strength in Gallup’s Strength finders is COMPETITION. It is hard-wired into me to want to be successful at everything I do. So, when I fail, I take it hard. Failing twice was uncharted territory for me. The third time was a success, but only because I learned from failing.

Seeking Clarity After a Failure

Several years later, I failed again. This time, I was the head of HR at Success Academy Charter Schools. I was charged, along with my Talent team, to build a hiring plan for a major expansion in the organization that was 15 months out. Hiring 1,000 school-based personnel over nine months is no easy feat.  We worked for eight weeks well into the night and even over weekends. A team of six individuals, including my senior Talent Director and the head of the Marketing department, made up the team. We built a great plan. It was 113 pages covering every angle and every dollar.

But it was a failure. The CEO didn’t speak our language. Or, I should say, she didn’t understand our measurements, acronyms or business logic. She also had a predetermined picture of what the plan should look like, and our plan didn’t look anything like what she expected. This failure was not one of effort, or even buy-in. In fact, from a business perspective, it was spot-on. We failed because we didn’t educate her about what was truly important. She was a politician and educator, not a business person. We blamed her, but it was on us. Our plan was great, but she didn’t understand it. So, bottom line: we failed. Of course, we adjusted and came up with a winning plan, however it took failing to do so.

Sometimes HR fails for reasons that may not seem clear at that exact moment.

Plot Twist: Being on the Other End of HR Failure

The plot “twists” when you are on the receiving end of HR failure.

As many of you know, I teach graduate-level HR in the MBA program at Adelphi University. I love teaching college students. I received a teaching excellence award 5 years ago at the university too. I think if I had a do-over in my life, I would have gone for a PhD and done this as my career.

Well anyway, I was recently promoted to a Senior Adjunct title. This is tough to come by. The university made the promotion with an effective date more than three months in the future. 97 days in the future, to be exact. I challenged this as full-time professors’ promotions were made retroactive to the beginning of the semester. So, I went through all the channels: The union, administration, and finally HR.

As of the date of this article, this it is still an open issue. However, from my perspective, HR is failing on this issue. Why, you may ask? Well, to start with, three months is way to long. Second, they are treating part-timers as second-class citizens. But the most important reason is that promotions should be positive events for all involved. The solution is easy and there is very little down side to making this right.

Like the failure we had at the charter school, it was not a failure of effort or even content. It was a failure to focus on what was most important. In this case, what is most important is recognizing achievement in a timely manner. Sometimes in HR we focus on the wrong thing and as a result we fail.

So, the lesson today is this: refocus on what is important in your task. Get your sight line and attitude adjusted. When you do fail, own it and do your best to learn from it… there is no shame in failing, only in failing to learn.

Mark S. Fogel is the Co-founder of Human Capital 3.0, a Human Capital and Organizational Leadership advisory firm servicing a broad range of industries with a focus on assisting businesses identify and grow its talent strategically. As a former CHRO for Leviton, Marcum, and Success Academy Charter Schools, Mark was the recipient of several national awards including SHRM’s Human Capital Leader of the Year and HR Executive Magazine’s Honor Role. Often Quoted in national media, Mark brings a refreshing point of view to every HR discussion. Follow him on the SHRM blog, Fistfuloftalent.com and on Twitter @HC3.