What Would HR Look Like In a Less Global World? 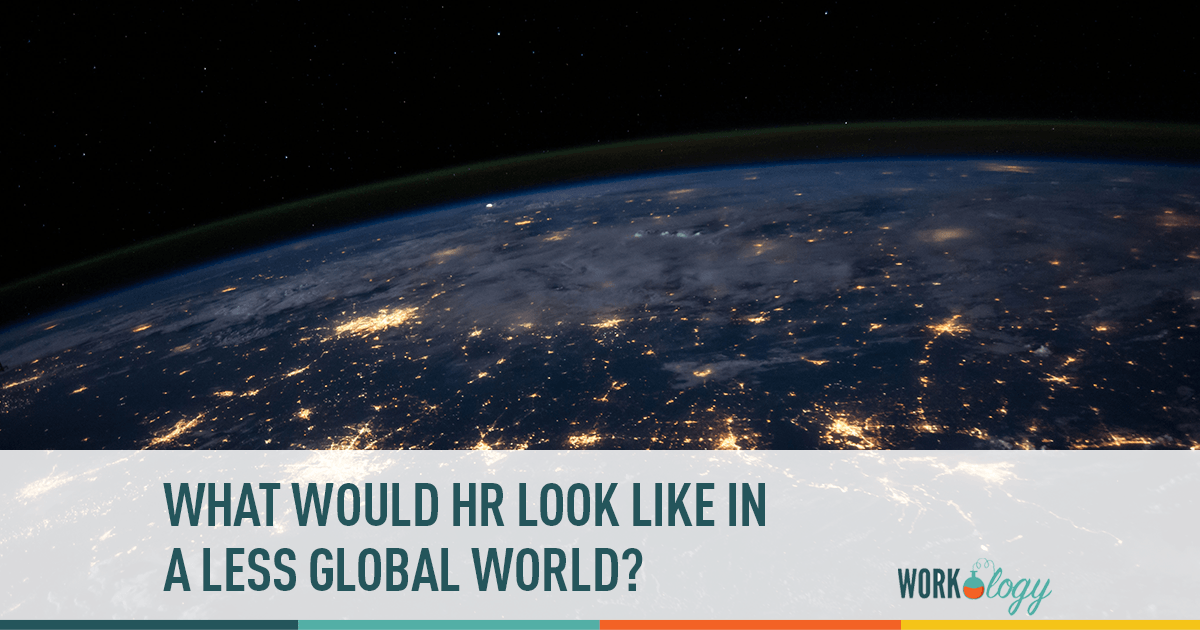 I teach certification classes at a local university. In a class this last week we covered the subject of HR in the global arena. There is a lot of emphasis placed on global awareness in the material for these certification classes. I read something in the October 31st issue of The New York Times that made me wonder if HR will change as the world changes.

The name of the article was Little-Noticed Trade Fact: It’s No Longer Rising, by Binyamin Appelbaum. Mr. Appelbaum reports that trade on a global basis has fallen in 2016. In the United States the value of imports and exports fell $200 billion in 2015 and has fallen an additional $470 billion so far in 2016. Appelbaum doesn’t think this is just a blip on the radar. He says “there are signs that the slowdown is becoming structural. Developed nations appear to be backing away from globalization.”

Recent World Trade Organization’s talks have failed and the Trans-Pacific Partnership, an agreement of Pacific Rim countries, does not have the support of either American Presidential candidate. We already know that Britain is leaving the European Union. As a result of this slow-down in trade the WTO has put in place more than 2100 trade restrictions.

Appelbaum thinks the souring of the world population on global trade is the perception that “The benefits of globalization have accrued disproportionally to the wealthy, while the costs have fallen on displaced workers, and governments have failed to ease their pain.”

Walmart Is No Longer the Example

The Walmart way of doing trade with China has come to a halt. China’s place in the world is no longer as a supplier to the world. Rather it is making more of what it consumes and consumes more of what it makes rather than just supplying the rest of the world and consuming American goods. The situation in reality is much more complicated than this little summary here and the purpose of this blog is not clarify the woes of a global economy, but to ask whether we will see a change what is being taught in HR classes.

Will Future Material Reflect the Realities That Are Developing?

Like I said earlier much of the educational material in the certification program focuses on the global nature of HR. Unfortunately, the majority of people in HR in the US don’t own a piece of global HR. They are learning, what for them, are esoteric subjects. The local county HR department, or the manufacturing company’s HR department, or the HR administrator for a doctor’s office don’t deal with issues of global taxation or have need of Hofstede’s cultural dimensions (as interesting as they may be). Now I wonder if slowing global trade, which may result in fewer multi-nationals, will lead to a decrease in global emphasis in the HR certification process.

I guess we will have to wait and see if the one trend continues, if the other will follow.