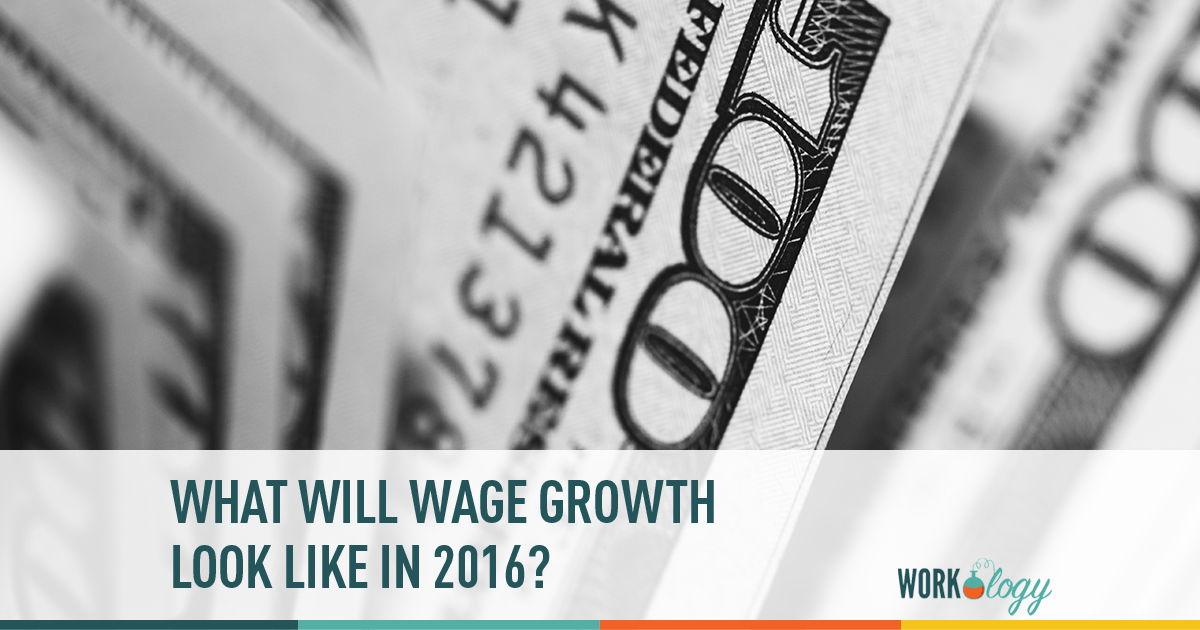 Wage growth is a thornier subject than it first appears. The real value of a raise can only be measured when adjusted for inflation and cost of living, and considered in conjunction with benefits, vacation time and other work perks. In other words, while wage growth may seem simple – average wages went up in America in 2015 and that’s grand! – they aren’t. Total compensation, the shape of the economy and even your geography have so much to do with the impact of wage growth, and how that impact is felt.

Since the 2008 crash wage growth has been slow in America. Over the last few years it’s started to pick up, but it’s not exactly booming. While job growth was strong in 2015, wage growth lagged at 2.5% for the year as a whole. Writing about last week’s BLS Jobs Report, I said wage growth was one of the key indicators to watch in 2016. Market watchers, in deciding whether to call the economy “fully recovered,” are looking to wage growth as the last remnant of the crash. After all, a healthy economy depends on more than the markets – it depends too on the economic security of workers.

There’s a real desire to see the American economy move past the “wage growth problem,” whether it be through big gains in real wage growth, or through changing how we look at the problem.

In 2015 America saw significant but not astonishing job growth and that’s got many of us feeling optimistic – we want to believe that 2016 will continue the upward trend toward full employment, healthy markets, and increased economic security for mid to low wage workers. That’s not a bad prediction, oil and gas troubles aside. Things are trending upwards, and the key question is not “will things improve” but “how soon and for whom.” Not, it’s clear, for most oil and gas workers, and still not for many low wage service sector workers, who continue to be trapped in underemployment.

Gwen Morgan, writing Monday morning in FastCompany, points to Korn Ferry Hay Group’s 2016 Salary Forecast, which predicts strong wage growth at home and internationally. The study suggests that “workers in most regions will, on average, see their biggest pay increase in three years. Real wages, which are average increases adjusted for inflation, will hit roughly 2.5%, with some regions experiencing markedly higher increases.” Another 2.5% increase doesn’t sound strange – except insofar as Korn Ferry Hay is calling it a dramatic increase – until you consider that the 2.5% increase cited in the BLS Report isn’t adjusted for inflation.

That 2.5% increase in 2015 may the strongest we’ve seen in six years, but because it’s unadjusted – not just for inflation but for any number of other significant factors – its real significance is unclear. Josh Zumbrun at WSJ argues that due to inflation being low, that increase is more strongly felt – that is, that adjusted for inflation 2.5% is a rather healthier increase than it might look. That means the 2.5% increase predicted by Korn Ferry Hay may be smaller than than last year’s unadjusted 2.5% – or it may not be. Predictions about wage growth, real wage growth and its impact on the prosperity of workers aren’t easy to make, except in the broadest of strokes: things will be good, or things will be bad, to the tune of about these many percentage points.

Morgan goes on to say that “[t]wo factors driving the increase are actual wage growth because of increased demand for skilled workers combined with historically low inflation.” That’s why Korn Ferry Hay predicts big wage growth in Latin America and India, but not necessarily big real wage growth – those gains may be eaten away by inflation rates that are much higher than what we’ve seen in North America. The Federal Reserve’s tight control of interest rates, only now ever so slightly loosened by a quarter of a point, has helped to keep inflation low.

In response to the Fed’s rate hike, major banks have raised their lending rates too – and that changes things. Credit has been cheap in America for some time now and student and consumer debt shows no sign of shrinking – and this too affects the impact of wage growth. As Suzanne McGee, writing in the Guardian, points out, “[t]he ripple effects will take months to show up. Federal student loans reprice in the summer, for instance, and by next July undoubtedly will be pricier. By then, private student loans already will have registered the impact of higher borrowing costs, since their interest rates are linked closely to short-term interest rates.” It’s a good time, she says, to think about consolidating your own date and exploring lower interest options.

So what does it all mean?

Wage growth in 2016 will probably be just fine. Huge increases don’t seem to be on the horizon, but neither do huge decreases. The exact amount of increase we will see, and its impact on prosperity, is incredibly unclear, however. Not least because the Fed hike could mean a sea change for the American economy, or it could be felt in much smaller ripples. Expect good things, then, but not great ones. Not yet, anyway.