What To Do When You’re Stuck At A Company With Uninspiring, Vague Or Toxic Culture 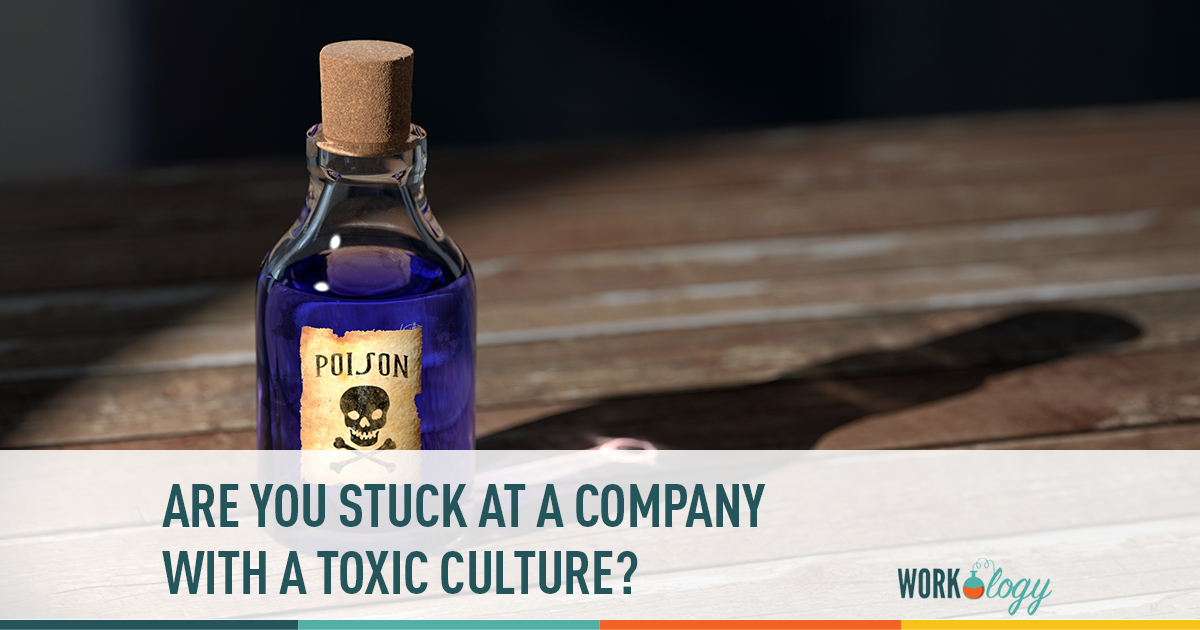 Quick. Tell me one thing that you love about your company’s culture.

Hmm, that was an awfully long pause for someone as experienced as you are.

Of course you know culture is a top business priority for CEOs today.

I suspect though, that if you’re in a leadership role, you’re caught up in defending, selling, improving, changing your company’s culture. So there’s not much time for you to consider whether or not it’s still a good fit for you personally.

Often, like sticking out a bad relationship, it’s easier to stay busy, look out for your team and pretend there’s not a problem.

If you’ve been heads down while the warning flares are shooting off around you, listen up.

If that’s not reality check enough, consider that most of us spend at least 30% of our life at work. That’s a lot of life energy. So think about it.

Do You Love Where You Work?

If your relationship with your company isn’t feeding your heart, soul and professional growth, what you may have on your hands is a dead shark.

And if so, it may be impacting your happiness more than you’re acknowledging.

Author, NYU professor and positive psychology revolutionary Jonathan Haidt said that “love and work are to people what water and sunshine are to plants.”

If we truly need both love and work to thrive, and you’ve been utterly submerged in the work half of the equation, how do you know when it’s time to bring the love back?

It’s a matter of awareness and attention.

Start with these 5 questions as your personal litmus test.

1. Is Leadership Being Transparent With You

Whether there’s one person above you or 100 if you can’t trust that the whole picture is being shared with you, how can you expect to love your company?

Consider the case of Amanda (not her real name) who, while working as President of a small startup, was being asked to make people decisions for the good of the business. However, the founders weren’t being honest with her about the financials.

She thought things were one way, but the reality was radically different. Hence, her best judgment was off target.

And decisions she was making with the level head she had been hired for were beginning to be held against her.

Unfortunately, she didn’t learn the truth until after she quit.

Amanda’s is an extreme case. But deception happens at all levels in the business world – including the C-Suite.

Keep your eyes open and determine if the leaders around you are being honest about the state of your company, where it’s headed and your role in the journey.

Which brings me to my next question.

2. Are You Valued? Are You Being Listened To?

At the very same startup, Amanda signed onto the executive team because she felt valued.

Her ideas were being implemented and her opinion was sought after at all levels.

Plus, the thrill of starting something from the ground up felt impactful in a way she had never experienced in the corporate world.

But as the transparency slipped away, so did the sense of fulfillment.

As transparency waned, her ideas began to fall on deaf ears. What started as the apparent creative opportunity of Amanda’s career degraded over time into a dead shark.

A toxic culture that prevented her from living up to her full potential.

Enter next question. Because yep, they’re all connected.

3. Are You Doing Your Best Work?

Your company’s culture should inspire your optimum performance. Or at the very least, stay out of your way.

Think about what kind of an environment you need to be your best:

Then remember that while these environmental factors influence your happiness and success, our progression with these questions is intentional.

Even if certain cultural qualities feel right, you can’t do your best work if…

And if you’re not being heard by the people who matter at your company, chances are it signals a conflict in values.

4. Are Your Values Aligned With Your Company’s?

Tony Hsieh, iconic cultural leader at Zappo’s recommends this to new entrepreneurs who are creating their company values from scratch:

Use your own personal values as a starting point.

When Hsieh founded his first company, culture fit was so important to him that he only hired friends, and friends of friends.

Finally, they ran out of friends to hire.

And, when he was literally too busy to interview everyone for culture fit, it evolved into a place that no longer reflected his values.

He didn’t want to get out of bed in the morning. So he quit.

As did Amanda, once she admitted to herself that the alignment of her values with her employer’s mattered more to her than the potential of getting rich.

It was one of the hardest career decisions she’s ever made. To get there, she finally asked herself…

5. Is There a Light At the End of the Tunnel?

For Amanda, there wasn’t. But what about you?

If you answered no to at least 3 out of the 4 questions above, chances are the future looks dim if you stay put.

So, should you stay or should you go? It’s a big question. One that I hope is fleshed out a bit more clearly in your mind right now.