What the Queen’s Work Anniversary Says About Employee Tenure 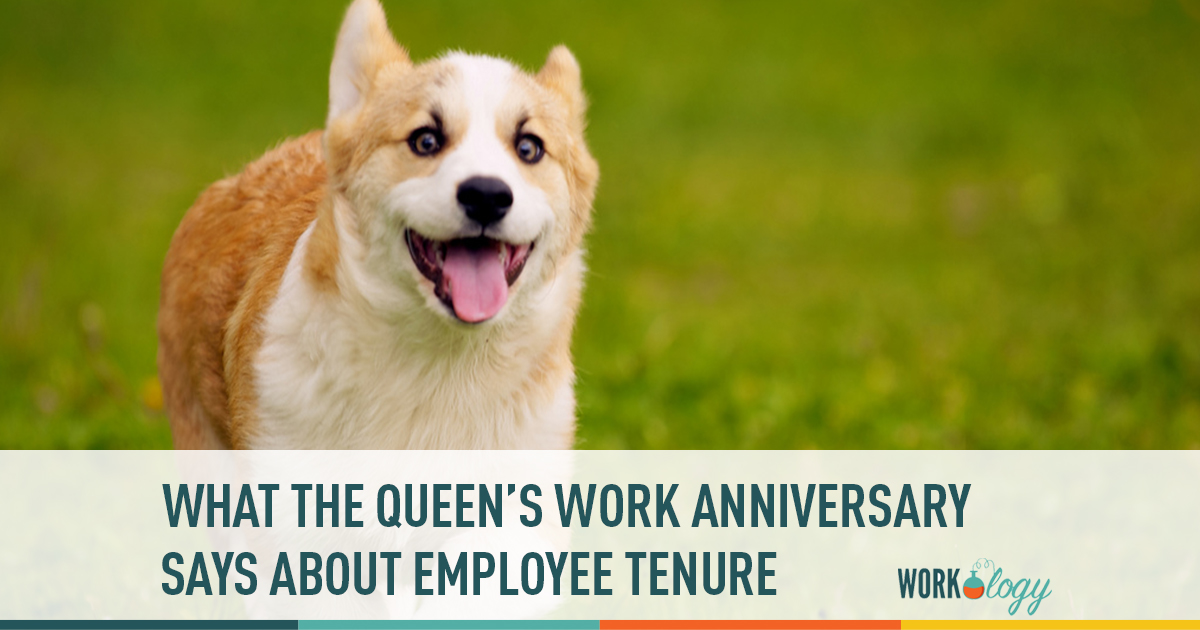 Queen Elizabeth celebrated a huge work anniversary this week, having been on the throne for 65 years. Last year, she broke the record for Britain’s longest reigning monarch and this she busted the world record. Although she’s slowed down a bit in recent years, and at 90-years-old, Elizabeth Windsor is far past the retirement age of most countries (women in the UK can start collecting state pension at 63), she is still at work giving heart-warming speeches, raising money for good causes and training the world’s cutest corgi squad.

Think about it: a 65 year work anniversary! The Queen has reigned through wars, recessions, boom times and now Brexit. She’s dealt with difficult colleagues (Prince Charles is no picnic, people, let’s be honest), poor work life balance and constant media attention, and through it all she’s kept calm and carried on. That is some serious company loyalty, worth at least 7 gold corgi-faced watches (one for every day of the week!), or at least a comfortable retirement.

Employee Tenure Is Getting Longer… But Not Queen-Long

Monarchy tends to be a job for life. You’re born into it and you can’t really leave it, not without some serious succession planning or, well, death. The old post-war boom “jobs for life” are a thing of the past in most industrialized countries. In that respect, the Queen is a huge outlier. But even though her reign is unusually long, it’s on trend for older workers.

The median employee tenure in the USA was 4.6 years in 2012, and according to the Bureau of Labour Statistics, that number was at the height of an upward trend since 2000, when it was 3.5 years. But the BLS also points out that the median tenure for employees who are 65 and older is, at 10 years, much higher. What that means is, if you’re going to work past the regular retirement age, you’re probably not going to change jobs — even if you’ve recently made a late career job switch. Good news UK, the Queen is highly unlikely to dump you for another country.

BLS says that the rise in tenure is thanks to the aging of the working population and that, interestingly, tenure has been going up for women in recent years. Federal government workers, of all genders and ethnicities, have some of the highest rates of tenure. If the trend continues, we’ll see employee tenure rising as more and more baby boomers reach retirement age and keep on working. And while Generation X represents a population contraction, from the post-war baby boom, Millennials are even more populous than Boomers.

Part of the reason that employee tenure rises with age is that people are less likely to want to take risks at the end of their career, and naturally, much less likely to do anything that would jeopardize their pension. But as advances in medicine make quality of life better for seniors and my much-despised, supposedly no loyalty generation — ugh, Millennials, we’re monsters — slowly creeps toward retirement age, will we stop seeing that correlation between age?

Unfortunately, the British monarchy won’t be of much help to us in making predictions about future tenure trends — at least not yet. At 68, Baby Boomer Prince Charles Windsor hasn’t even made it into the top job yet, so it’ll be ages before Prince William, notable Millennial, becomes King. But while that’s little help for making predictions about future employee tenure, it’s a story that’s all too familiar to this Millennial. If labour and medical trends hold true, when Prince William finally ascends to the throne (when he’s like 50 or so), he may hang onto it well past his 100th year.

Are we ready for a centenarian King of the commonwealth, a centenarian President of the USA, and a whole host of centenarian CEOs? I don’t know, but I guess we’ll find out… in about 50 years.