What Not To Do When Motivating Disengaged Employees 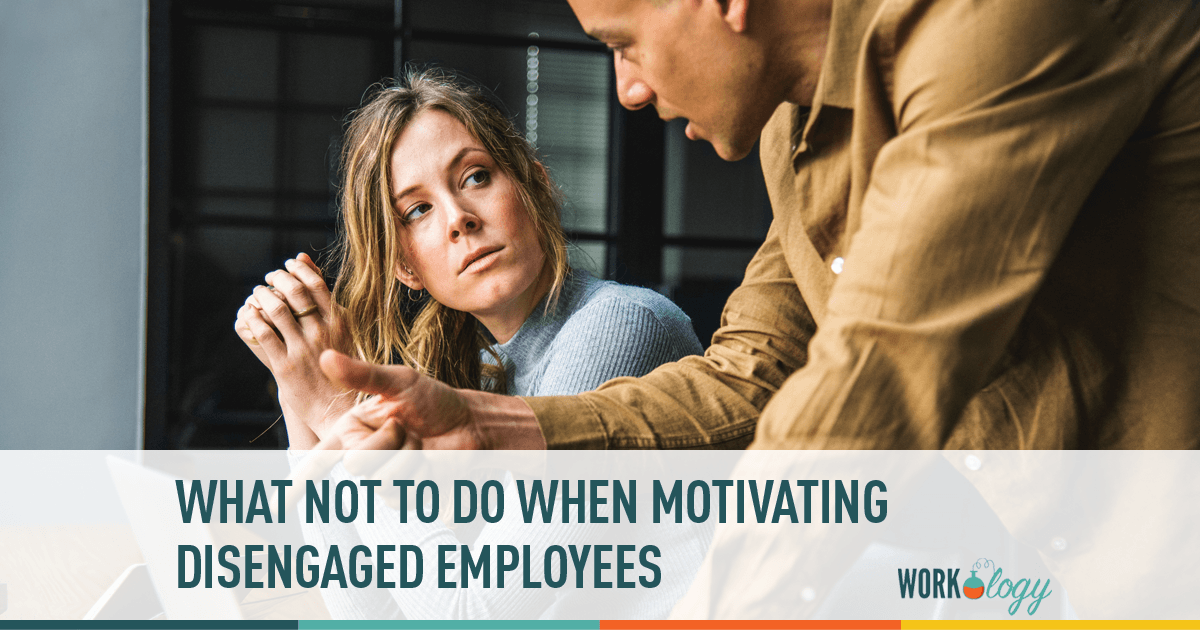 I saw the most awkward thing the other day while shopping at a local big box store. It was Saturday afternoon, before Easter, and the store and the parking lot was BUSY. Starting out in retail, Saturday afternoons, let alone those before major holidays, are a no-no — but I forgot to pick up a few things from the pharmacy… and had to. I remembered thinking how I hated that parking lot… people disregard all parking rules and logic, and there were carts EVERYWHERE! Drives me crazy as a customer (and was a pet peeve when I was in retail management). My trip was relatively quick (given the circumstances) but on the way out I see a manager yelling at his car attendant about all the carts — the gist: customers were complaining about their cars getting hit by the carts, several managers and workers had gotten the carts and complaints under control, and basically since this guy came on shift he’s been slacking, and the carts and complaints started to stack up again. Did I mention that this was in the middle of the parking lot by one of the main entrances — the whole thing was hard to miss — I heard it almost all the way back to my car. The entire time, the cart attendant had a look of “whatever” on his face, and he was fiddling with his phone — that seemed only enrage the manager that much more.  As a customer and manager, even an HR pro … I get it. But there has got to be a better way … we can all guess what happened next — I don’t know for sure, but I’m betting that there was still an increase in carts in the parking lot and a very disengaged employee who didn’t care and a manager who was at his wits end.

Yelling at someone who isn’t engaged is not a motivator .. and while the manager might have felt temporarily satisfied, it’s not appropriate, especially in front or within earshot of customers. He may have been making some valid points, but was in no way effective. Two things could have happened, in this case, the employee gets defensive, and they are either going to ignore you or rebuttal back and potentially escalate the situation. How everything unfolded was just straight up wrong. What did it accomplish other than making a scene?

Two things that could have turned the situation around: setting realistic goals and providing support.

First, the manager and the cart attendant could have set a realistic goal for the approach to clearing the carts that day. Whether it’s to bring in a specific number of carts, clear a cart corral per hour, no carts touching cars … set a goal and agree on it. Not only is it something to aspire to and work towards but it sets the expectation. So instead of the conversation being about how lazy they are and how they are not doing their job, its a matter of your not meeting the goal — what can I do to help or tell me what’s happening that’s preventing you from reaching it. It’s a much different dialog — and that’s key — it should be a dialog, not a one-way conversation. Don’t overlook the word “realistic” or the piece about “agreeing” — for some, a task that seems impossible to complete is itself demotivating and they may not even try.

The second thing is giving support. If it took the manager and several other employees to keep the carts under control — is it wise to think that one person is going to be able to continue to do so by himself? Lack of support for many people is a huge demotivator — it can be interpreted as no one cares, why should I? In this instance, support comes in a number of ways: first, staffing accordingly — know your peaks and valleys and have the people there to support the business. Second, giving the cart attendant some indicators to look for to signal for when they need additional help — and then be sure to respond. Lastly, help give priorities and offer best practices. Even with pushing carts, you can prioritize the responsibilities and what should be done first and some strategy around how to clear the lot, make carts available, and ensure carts aren’t running into customers cars.

While I’ve applied these two strategies to this specific situation, they can be applied to almost any situation as a starting point for employees or teams who are a little unmotivated or disengaged.

What do you think — what else could have turned this situation around or even prevented it?