What Is the National Day of Mourning? 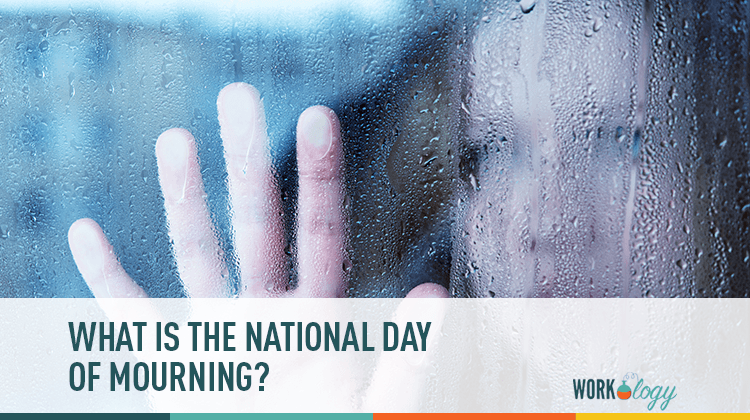 What Is the National Day of Mourning?

The National Day of Mourning, a protest first organized in 1970 by United American Indians of New England (UAINE), is observed every year on Thanksgiving. It includes in-person and online protests, especially centering on celebrations of Thanksgiving that present an uncritical view of America’s past. The Day of Mourning protests American colonialism, then and now, and the continued marginalization and mistreatment of indigenous people.

The UAINE first protest was timed to coincide with the 350th anniversary of the Pilgrims arriving on Wampanoag land, now know as Massachusetts. The Commonwealth has traditionally held a “reenactment” of the first Thanksgiving, including prayers, a meal, and a march – but while it’s become something of a tourist attraction and its version of events looms large in the national memory, it’s far from accurate. In 1970 Wampanoag leader Frank James was invited to give a speech as part of the Thanksgiving reenactment but when the organizers cancelled his appearance for being too inflammatory and not in the spirit of brotherhood, the UAINE organized their first protest.

What Should I Do About It?

The National Day of Mourning isn’t the only Thanksgiving protest. On the West Coast, Unthanksgiving, or the Indigenous Peoples Sunrise Ceremony, is held every year on Alcatraz Island. There are countless other annual or semi-regular protests in cities across the country, as well as organized or individual online activism that involves sharing education videos, articles and memes.

As an HR professional you should be aware of national and local protests and how they may impact your colleagues and employees. You don’t have to make a statement about the National Day of Mourning or put up posters in the lunchroom. (Depending on your employer, this may not even be possible, whatever your intentions.) You don’t even need to cancel the annual potluck lunch. What you can and should do, though, is discourage nationalistic Thanksgiving observations at work. Your diverse workforce has different understandings of the holiday and of American history. Cut the Pilgrim costumes and fables and encourage a celebration, of harvest, burdens shared, and all you’ve accomplished together, one that allows each employee to bring their own food traditions to the mix.

Many human resources professionals try to appear politically neutral at work, (which has its benefits and its costs) but it never pays to be politically unaware. Be prepared for confrontations over Thanksgiving celebrations at work, whether for or against, by removing objectionable elements, understanding the issues, and your employees concerned – then you’ll have a stance worth defending.

While holidays in the workplace can be tricky, given that so many of them have religious and political associations that can cause conflict or worse, turning them into celebrations of your team is always your safest bet.