What Singularity Is and What HR Needs to Know About AI 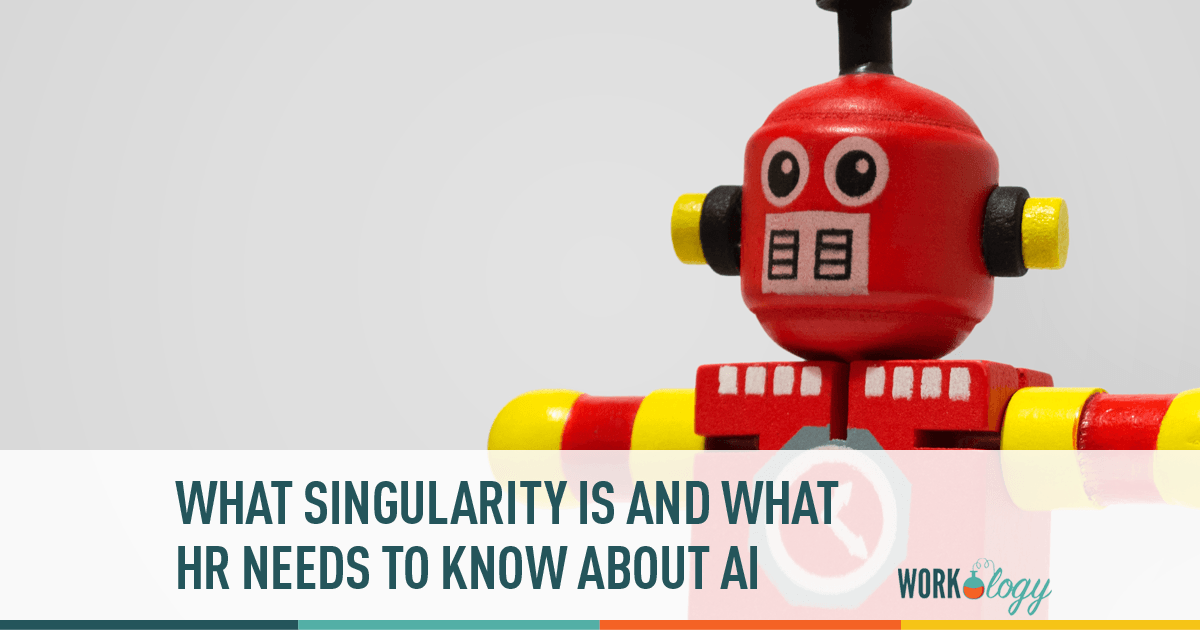 You may not know what singularity means but you have certainly encountered it, most likely in movies such The Terminator, War Games, Star Trek, A.I., The Matrix, I Robot, and many more. Some are dystopian, such as The Terminator, others are utopian, though not nearly as often. We seem to have a dark vision of the future. So what does it mean and why is it important for HR to know this?

There actually is no singular definition. In fact, according to the blog Singularity, there are about 17 definitions. Although there is some variety in these definitions the main point of (technological) singularity is that this is when computers will surpass the point of human intelligence. This will be the point where computers engage in what is called recursive self-improvement. This means they will continually be able to make themselves better without any intervention by humans.

For some people singularity means not just super-intelligence greater than humans but a melding of humans with that intelligence. This implies for them prosthetics and implanted devices that can take advantage of the super intelligence of a computer.

According to the Singularity blog one of the prime thought leaders in the concept, Verner Vinge, said in 1993:

“Within thirty years, we will have the technological means to create superhuman intelligence. Shortly after, the human era will be ended. […] I think it’s fair to call this event a singularity. It is a point where our models must be discarded and a new reality rules. As we move closer and closer to this point, it will loom vaster and vaster over human affairs till the notion becomes a commonplace. Yet when it finally happens it may still be a great surprise and a greater unknown.”

Further the blog goes on to point out:

I want to point out that #3 and #4, and perhaps the other two as well, already exist to an extent. Google Glass is an example of #3 and the rapid development of genetic alteration smacks easily of #4.

Ray Kurzwell is considered to be one of the current thought leaders on Singularity. He was quoted as saying singularity is:

“… a future period during which the pace of technological change will be so rapid, its impact so deep, that human life will be irreversibly transformed. Although neither utopian nor dystopian, this epoch will transform the concepts that we rely on to give meaning to our lives, from our business models to the cycle of human life, including death itself.”

Why HR needs to know

Beyond just the idea that knowing what singularity is will make you sound more intelligent, knowing about the concept is important because it is going to increasing play a bigger part in our work world. I have written numerous times about jobs being taken over by robots and the nature of work having to change to be more “human.” (See here, here, and here.) The idea is going to force you to think radically about how the workplace will have to be altered to adapt and adopt. Tia Ghose, a LiveScience Staff Writer, has written that one of the effects of singularity will be an economy on steroids to the max. As she said:

Once machines can match human intelligence, it will be a simple matter of copying intelligent agent software, which is capable of programming an artificial mind, from one computer to the next to create more workers for the economy. Whereas the economy doubled every thousand years after the agricultural revolution, and every 15 years after the industrial revolution, a post-singularity economy could double every month, then week… That blistering pace of economic growth could be so fast that humans couldn’t keep up.

What HR Needs to Know About AI

As this future approaches employees may become much more disturbed and concerned about their futures. Rather than adopting technology in order to be more productive they may actually resist the technology in an attempt to forestall what they see has the “takeover of the world” by machines. You will need to be prepared to deal with this resistance as things change in your company. Since we in the U.S. in particular seem to have a dystopian view of the future of technology we may reach a point of little advance in the “people” parts of our businesses.