What is EQ? Emotional Intelligence in the Workplace 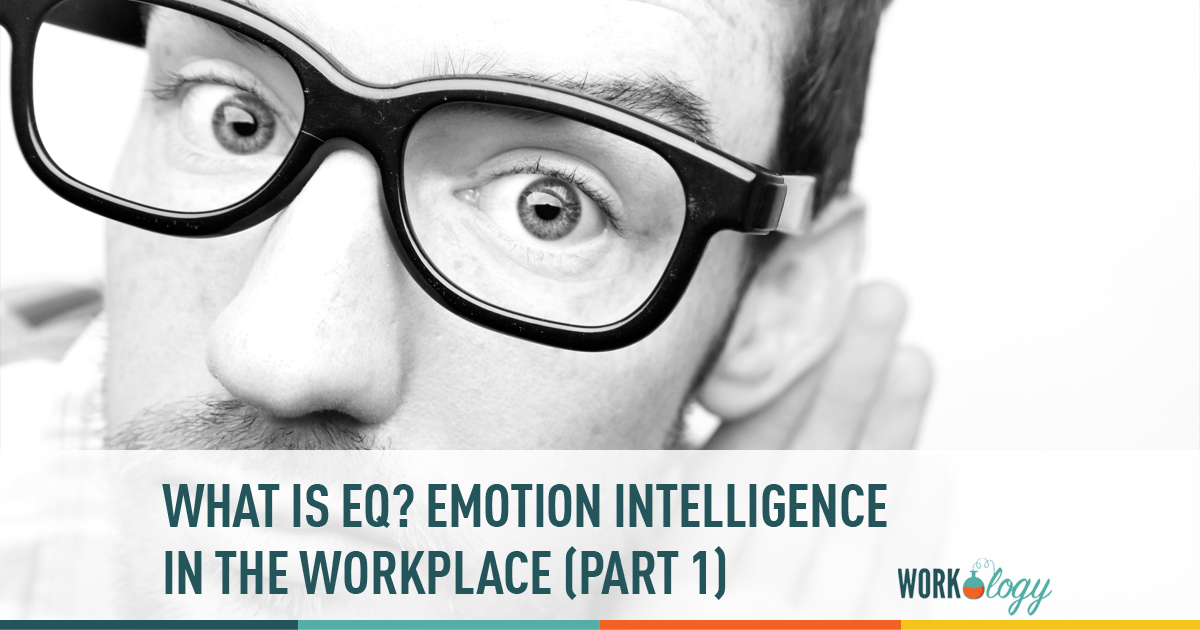 This is Part I of a 2-part series on Emotional Intelligence and the Emotional Quotient (EQ).

Have you ever met someone who can’t help telling you his IQ? Isn’t that charming? Ironically, bragging about a high IQ indicates a deficiency in another kind of intelligence, emotional intelligence. How can learning about Emotional Intelligence help you? If you’re a manager, the effectiveness of your team depends on how well they work together. And whether you’re a manager or not, knowing your own emotional strengths and weaknesses can help you perform better at your job.

The Intelligence Quotient is supposed to measure raw brainpower. We know that in general, IQ is a good predictor of success in school. We know a little less about how it affects work performance, but given the same amount of experience, folks with higher IQs tend to perform better in the same job than those with lower IQs. Emotional intelligence, has gained a lot of currency in the last 10 years or so, especially in corporate psychology, because Emotional Intelligence, or the Emotional Quotient (EQ) can tell us a lot about a person’s effectiveness in the workplace. And it can tell you a lot about your own potential, or that of your team.

What the Experts Say About Emotional Intelligence

I interviewed Dr. Jason Jones, a corporate psychologist, speaker, and coach to find out if EQ was just another corporate fad. It turns out that EQ is scientifically measurable, just like IQ.  “Research conducted in the 1980’s led psychologists to coining the term Emotional Intelligence and its measure, Emotional Quotient (EQ). A series of studies from Yale University linked a person’s level of EQ to personal achievement, happiness, and professional success far more accurately than the Intelligence Quotient (IQ)” writes Jones.

But what is EQ? Jones writes that it’s a measure of how “a person effectively manages and cultivates relationships with other people. In other words, a person’s capacity to get along with others.”

But isn’t a high “EQ” the same thing as “maturity?” Couldn’t we just say that a person with a high EQ is “mature?” Not necessarily, according to Jones. “The term ‘maturity’ has no scientific measurement and is subjective. Thus, people have different perspectives and definitions of what maturity is.”

Can You Increase Your EQ? (Or the EQ of Your Team Members?)

Now, you may have never met someone who can’t help but brag about his IQ. But I guarantee you’ve met someone who takes everything personally, who has trouble getting along with others, and can’t adequately understand his or her own feelings and how they affect the workplace. The great news about low EQ is that unlike IQ, it can be increased by learning new emotional coping skills.  So if you’re managing a direct report who can’t seem to get along with others, there’s hope that you can help him or her improve workplace performance by learning some new emotional skills. “EQ can be developed and increased. There is a large amount of data to support this notion. A person’s life experience often supports a person’s EQ growth.” writes Jones. Wouldn’t it be great if, as a manager, you could be the life experience that helps a person grow and mature? It’s a win-win-win situation. You get a better worker, your team gets a better member, and most important, your team member is happier and healthier.

There’s far too much in EQ to cover in this one short article. In two weeks, I’ll give some specific tips on increasing your EQ or helping your team to increase theirs. In the meantime, Dr. Jones recommends reading “Emotional Intelligence 2.0” by Travis Bradberry and Jean Graves. I’ll be reading it and be back with specific tips then. Feel free to post questions or comments below, and I’ll address them in the next article.