What Is a Work Perk Worth? 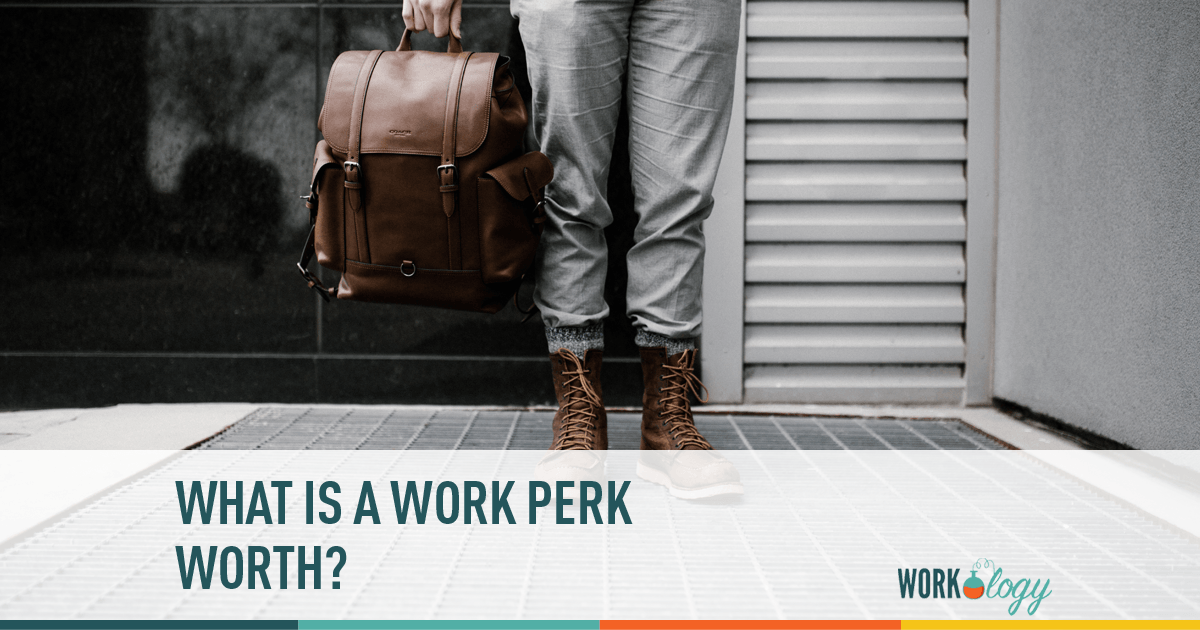 One of the trends B4J is keeping an eye on in 2016 is the growing popularity of unique perk and benefit packages as a way for employers to differentiate themselves in a competitive marketplace.

These packages can come bundled with a generous salary, but increasingly, as trends in tech HR spread to other industries, they supplement or counterbalance low salaries. It’s more and more common to see perks offered in lieu of bonuses or raises. And that can be both good or bad – how the balance of wages and perks plays out for employers and employees depends so much on context.

What Is a Work Perk Worth?

In the world of tech startups, where pre-funding companies still often operate lean, shares and a belief in the mission and potential of the product, are what keep talented engineers from jumping ship. In other organizations, in-kind perk packages – all those discounts on goods and services, along with medical and personal benefits – are used to sweeten the deal on an offer of employment, or even keep existing employees happy. Sometimes these packages are obviously valuable, both on a personal and a financial level, but other times their worth is less clear.

Shares in a booming startup are great – unless they’re in a less valuable class.

Free concierge services are wonderful – unless they’re another thing tying you to your desk, with the expectation that with fewer personal worries, you can spend more time working.

Discounts and offers are always good – unless, due to the nature of your work or pressures associated with it, you won’t be able to take advantage of them.

It’s difficult to assess the value of a perk, and not just because they don’t come with a neatly listed book value. Your own psychology works against you, just as it does when assessing the value of sales and coupons. We’re none of us as rational as we’d like to think, and when it comes to making financial decisions, we’re driven more by the good feelings of having found and exploited a deal, than we are by actually finding the best deal. Retailers use the psychology of discounts to drive sales during slow quarters – but those discounts don’t need to be worthwhile to feel good, and those deals don’t really need to be deals to create satisfaction. The same discount feels better or worse depending on how it’s presented: percentage off versus dollar value off; anchor price displayed prominently or not. The value of a coupon, as far as your brain is concerned, is more determined by the feeling of using it, than by how much you saved.

The same is true when it comes to employment decisions. When you’re in a position to decide between two similar offers, it isn’t always money that makes the difference. Often it’s the expectation of other perceived benefits – good culture fit, a shorter commute, opportunity for growth and better benefits – that is the deciding factor. That’s not a bad thing. We work for money, but it’s not money that marks the difference between a job and a career, and it’s not money that creates good work life balance. In many cases the value of work perks and benefits does exceed the value of your salary; low wage unionized workers, new families, and people dealing with chronic illness are often motivated more by the associated benefits of their job than by their actual salary. Should you take the job that pays more but doesn’t come with health insurance? I don’t know your personal circumstances, so you’d better plot that cost/benefit carefully.

No matter how good your analysis is, we’re emotional thinkers as much as we are rational thinkers – our decision making will never be as Spock-like as we might like. And the bigger the expected benefit – the better it feels – the less closely we look at the deal.

Unlimited vacation! Once Netflix instituted it in 2014, expansive vacation policies were cropping up all over Silicon Valley. Unlimited vacation, sabbaticals, and unlimited parental leave sound great at first – until you look at statistics regarding vacation. Almost 75% of employees don’t use up their vacation, even when it’s capped as low as four or even two weeks. So far, the data we have on unlimited vacations suggests that limit or no limit, workers are still reluctant to take vacation, especially in highly competitive environments. And although 2015 also saw the expansion of paternal leave benefits in tech, it also saw high profile women like Marissa Mayer of Yahoo declaring that two weeks was more than enough time off for her. Yahoo may be offering more parental leave than ever before, but the value of that perk is diminished by the psychological pressure of living up to the CEO’s example.

The full value of a work perk is only realized when it’s used and enjoyed. The mere existence of perks has psychological value, but its monetary worth is squandered unless used. On the other hand, the value of a perk, just like a wage, can be psychologically diminished if it doesn’t produce satisfaction. That is, if all your perks, wages, and benefits don’t produce good health and security, much less happiness they won’t ever feel quite good.  You feel good when your employer demonstrates that it values you by offering you perks – even perks you’re never going to use. You feel good when your employer recognizes your hard work – even if its just by saying thanks.

Work perks work for employers and employees both because they have real value, and because they have the feeling of a reward or of recognition. But because their worth is both tangible and intangible, their ultimate value is unclear and always personal, and their ability to trick us, both employer and employee, is vast.