What if the Robot Apocalypse Was More Like a Robot Utopia? 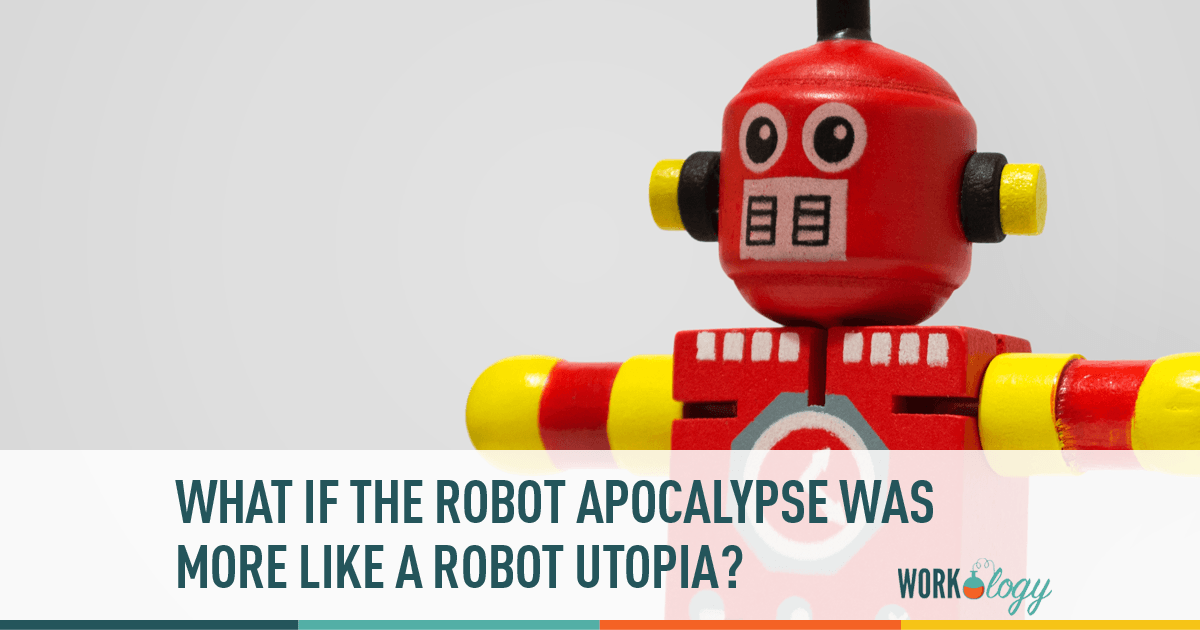 What if robots don’t steal all of our jobs and leave us unemployed shells of our former selves? I’ve written a lot about the downside of the expanded role for robotics, AIs and machine learning at work and in the marketplace but there’s an upside to it too. In manufacturing and agriculture robots have both eliminated jobs and created new ones. In the service industry, robots and AIs have eliminated some frontline jobs but the growing use of automation has also created a market for more hands on service — it has made “good service” more attractive than ever. We see the same thing happening at corporate offices. Research and secretarial work have changed and in some cases vanished. New roles for IT and developers have been created. This transformation is happening all over the world and we don’t yet know where it will lead us.

Robots and AIs Both Destroy and Create Jobs

Recently Mynul Khan wrote on TechCrunch that, in the past, new technologies have disrupted industries, eliminated jobs and then, after coming into their own, created new ones. The first industrial revolution was, well, revolutionary, resulting in mass displacement as workers moved into the city, the disruption of agriculture and textile industries and social unrest. But it also created new industries. Kuhn cites a 2011 International Federation of Robotics study on the positive impact of robots. The study “found that one million industrial robots directly created nearly three million jobs. Of the six countries examined in the study, five saw their unemployment rates go down as the number of robots used went up.”

That sounds great, right? And it is true. Robots have a tremendous potential to create jobs — just as much as they have the potential to eliminate jobs. Jeffrey Dorfman writes in Forbes that the huge shift in agricultural employment proves that technology shifts employment more than it eliminates it. Between 1810 and 1900 agriculture went from employing 84% of the workforce to 40% of the workforce. This change was due to the introduction to new technologies into farming.

“Yet, somehow, this enormous outflow of jobs from agriculture did not lead to mass unemployment. That 83 percent of the workforce that got displaced found new jobs. Many of the jobs those leaving agriculture took in 1900 or 1950 were jobs that did not exist long before the jobs in agriculture disappeared. Some people even have jobs building, selling, and repairing the machines that replaced those agricultural workers.”

But although overall employment didn’t decline, this was not a simple case of workers responding to changes in the market, being retrained and finding new work. The move from agriculture to industrial and service employment was not smooth and was not a one-to-one exchange of one kind of work for another. Today, less than 2% of Americans work in agriculture. Although many of those who might have worked on farms, had they been born 100 years earlier, are engaged in other work, but as much as agriculture proves that the march of technology creates new jobs, it also proves that in the long run, the potential for robots to completely eliminate large sectors of work is a real one.

The case of agriculture, though, is complicated by the industry’s reliance on undocumented labourers — rather than present clearcut case where technology has created tons of new jobs, or completely eliminated work, it has helped to create a situation where only low-paying, unskilled labour is available, supplemental to combines and other farm machinery.

Rather than being the perfect test case, agriculture — and even manufacturing — only introduce more complications. As another Forbes blogger, Tim Worstall, puts it, robots don’t create the same number of jobs they destroy and they don’t create jobs where they destroy jobs. Rather, the benefit of automation and the freeing up of people from unskilled manual labour creates prosperity in its creation of opportunity.

Think about manufacturing. It’s not true that manufacturing doesn’t take place on American soil anymore, but it is true that a dwindling number of people work in manufacturing. In the 1970s 25% of American workers were employed in manufacturing. Now, only 8.8%. If you follow the Bureau of Labour Statistics’ monthly jobs reports, you know that number is only decreasing– but yet, the overall unemployment rate isn’t rising. Did automation move all those workers into better paying, more satisfying work? While it created more growth, more economic prosperity, for many individual workers, it was a disaster. As employment declines in agriculture, manufacturing and now the energy sector, it increases in technology, medicine and service sector — and only one of those categories has jobs that are easy to switch into without years of training.

The Transformation Will Be Radical and It Won’t Be Easy

Robots and AIs won’t make us all obsolete. But they will radically transform every industry and creating new luxuries, new fields of work and study. Nothing about this change will be easy or painless. Along the way millions of Americans will be unemployed and thousands of companies will struggle to keep up with the pace of technological change. That’s why so many, on both the right and the left, are thinking about radical proposals like universal basic income: the scope of change experts expect over the next 50 years is on the scale of the first industrial revolution. And that’s worth worrying about.

Khan says that Luddites, the anti-industry activists who sabotaged power looms are a symbol of how opposing the future never works. After all, “the fact that calling someone a Luddite today is an insult shows how unfounded their concerns were.” But the Luddites concerns weren’t unfounded — they stood to lose much from the introduction of power looms. Although the economy as a whole recovered from and thrived after the disruptive period of technological innovation, individual workers experienced a variety of outcomes. Some lost everything. Others gained much. Technological change impacts the market and individuals differently, and the good and bad falls unequally — even if a rising tide rises all boats, not all boats are sail into the safe harbour. Opposition to technological change is natural.

The effect that robots and AI has had and will have on workers and the marketplace is complex. It will neither be wholly good or wholly bad, but instead will both eliminate jobs and create new ones. It will make our lives easier while introducing social and economic unrest, and creating complications we can’t yet foresee. It’s true, there won’t be a robot apocalypse, but there won’t be a robot utopia either. What’s left is to watch the trends carefully with an eye to history, and to create the best policies — on a social, local and organizational level — for people impacted by change that we can.