What HR Can Do About Racism and Microaggressions at Work 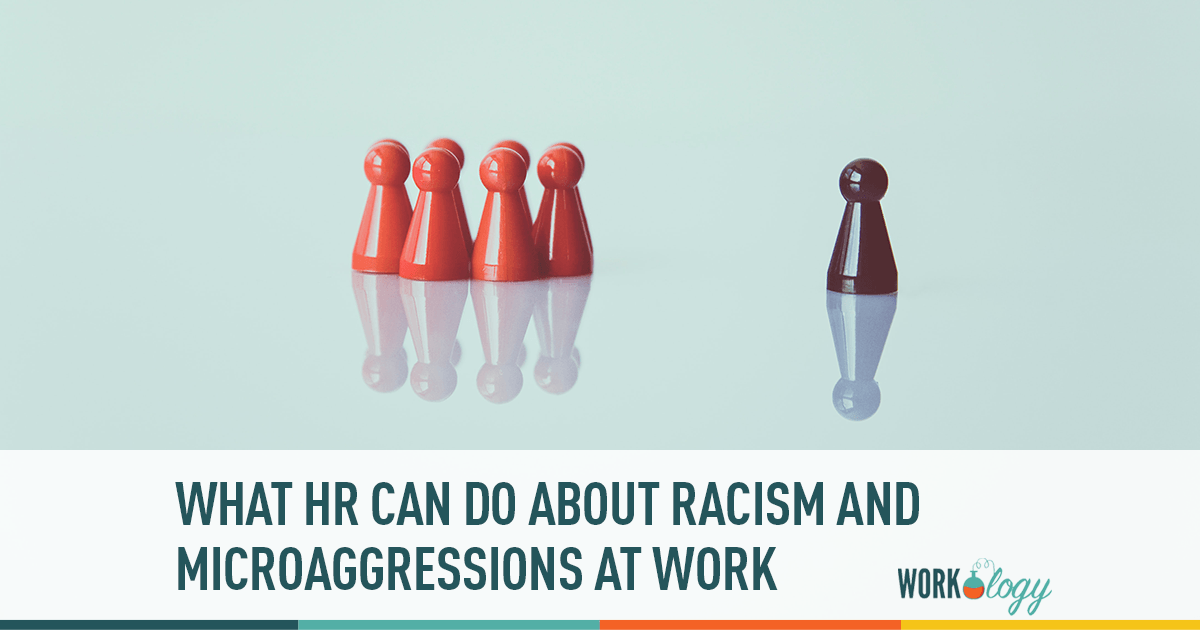 You can learn more about microaggressions by subscribing to our Workology Podcast so you can hear about our upcoming podcast episode with Kim Crowder. Subscribe to us on Stitcher | PocketCast | iTunes | Podcast RSS | Google Play | YouTube | TuneIn.

In an upcoming Workology podcast interview soon to be published with Kim Crowder, a diversity and inclusion expert that has recently been listed by Forbes as one of the top seven anti racism educators you need to know, Kim talked about microaggressions. I wanted to talk about this term in more details BEFORE the podcast aired because I was unfamiliar with the term. In preparation for the podcast interview, I realized the lack of informaiton and resources on the topic of microaggression in the D&I and human resources spaces. Thus, this was the inspiration for putting together this post.

The term microaggression was new to me, but once Kim explained what they are it made sense and summed up some of the things I have experienced in my work career as a female, whether it was in the corporate HR folds climbing up the business ranks or as an entrepreneur who some felt I didn’t belong or deserve to be here because I was a woman.

Microaggressions are defined as “brief and commonplace daily verbal, behavioral, and environmental indignities, whether intentional or unintentional, that communicate hostile, derogatory, or negative racial, gender, sexual orientation, and religious slights and insults to the target person or group.”

Microaggressions are insidious in our culture, and in the context of what’s happening in the US right now with Black Lives Matter, it’s important that companies and HR leaders understand the impact they can have on a workplace. Our underrepresented employees might not be blatantly being discriminated against or treated unfairly, but these small and underhanded comments, remarks, and being looked over for assignments add up. In short, they are another layer of covert discrimination and inequalities that managers don’t often receive training for.

What makes microaggressions so damaging is that they don’t necessarily look like something that is covered under EEOC guidelines. “The way that people expect to see racism is in such overt ways, but for those of us who are part of underrepresented groups, it doesn’t look like that,” said Kim. “We call them small, but to the person it happens to it feels very big because it’s triggering. It’s an ‘all of a sudden’ moment.”

When we as HR leaders are so focused on diversity and inclusion, we don’t always think about what we’re leaving out. “People talk about unconscious bias, which is a pretty common workplace training topic. The terms that should be discussed aren’t being discussed and microaggressions are a good example,” said Kim. If it’s hurting your employees, it’s hurting your business. Ignoring these issues is causing companies to lose great employees. Consider this: 57 percent of employees say they leave their jobs because of bad bosses and three out of five U.S. employees have witnessed or experienced discrimination.

What Does Microaggression at Work Look Like and How Do We Address and Change It?

So how do we, as HR leaders, address and work to eliminate racism and microaggressions in our workplaces?

This level of systemic oppression doesn’t stem from a single thing, and there isn’t a single solution to the problem. Kim recommends a series of actions that companies can take to create positive systemic change.

– Acknowledge that this is a process and that one webinar or one training won’t get you there. Start thinking long term. It’s going to be uncomfortable and it might feel overwhelming, but if you have defined the core values of your organization, this is what is necessary to stand by them.

– Have difficult conversations about racism at the leadership level, and consider if leadership is able to have conversations in a helpful way or if they need education or outside assistance. A note: Do not expect your underrepresented employees to take on the role of educators. You must give these employees a voice, but that is not the same thing as expecting People of Color to teach the leadership at your company how to be anti racist.

– Bring someone in who can see your organization with fresh eyes. Sometimes organizations have people within the company that point out areas in which we can do better, but tend to listen to outside experts when it comes to action. There are outside experts who do this for a living and Kim is one of them.

– Which brings us to the next item: Listen to your underrepresented employees. Listen actively and compassionately. Create safe spaces for employees to share their experiences and report issues in confidence. This can also be done through affinity groups or employee resource groups.

– Don’t try to tackle everything at once. This is a journey. Work with upper level leadership to define one or two things that you can commit to that will make real change. Agree to revisit and evaluate on an ongoing basis with no fixed end date.

– Be clear that this is not a response to the media. If we only see diversity and inclusion as a response to media, we lose out on the long term benefits of it. This is a conversation about humanity, about whether or not your employees trust you, whether or not your leadership reflects your public statements. Determine what you want your legacy to be and commit to that vision instead of being reactionary to what’s trending.

Kim shared her experience as a consultant for organizations on anti racism education. “When we talk about the different burden on different groups, particularly with black employees that have had to watch someone that looks like them murdered on camera, and then have to go into work and be normal and professional. It really creates an unfair and inequitable situation for your black employees,” said Kim. “I have organizations coming to me and saying ‘we don’t know how to talk about this.’ Here’s what people respect: saying ‘I don’t know. True leadership is vulnerability. The more that you’re willing to say that you don’t know but you are committed to finding out. Be comfortable sitting in and honoring what you don’t know.”

You can learn more about microaggressions by subscribing to our Workology Podcast so you can hear about our upcoming podcast episode with Kim Crowder. Subscribe to us on Stitcher | PocketCast | iTunes | Podcast RSS | Google Play | YouTube | TuneIn.