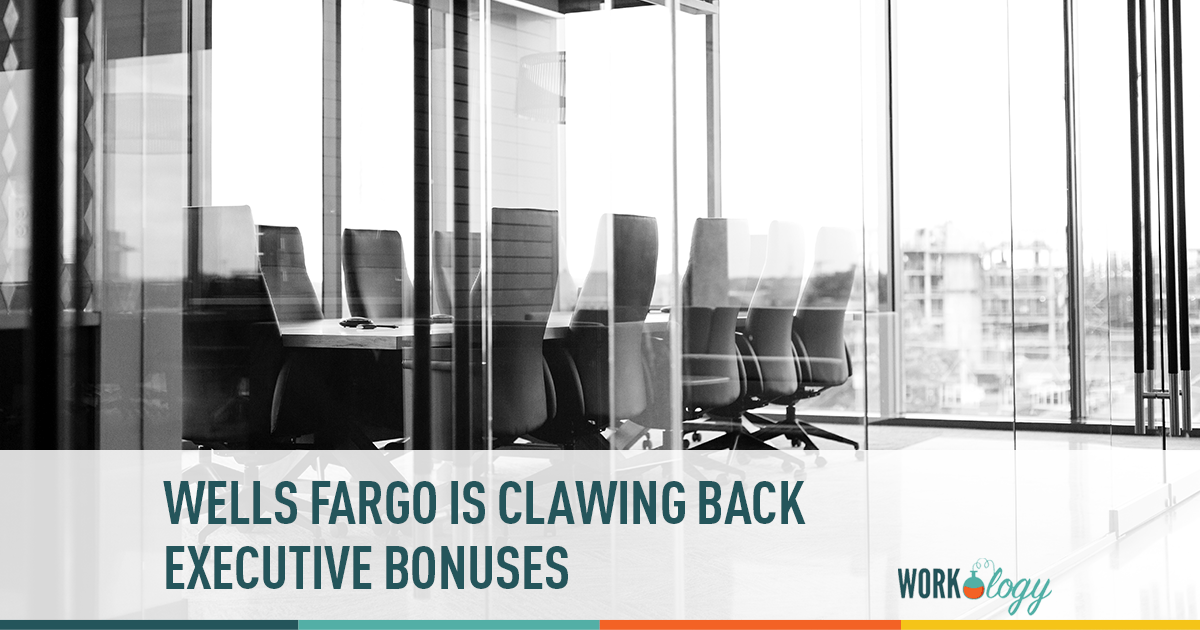 Earlier this month we learned that Wells Fargo fired thousands of front line bank employees for creating over 2 million “ghost accounts” for existing customers. Today the bank announced that they would be clawing back millions of bonuses from its executive team.

The “ghost account” scheme allowed Wells Fargo retail bank employees, who are considered sales people not customer service reps or financial advisors, to boost their sales figures. It also significantly increased banks’ intake of fees — from existing customers who had no idea they’d been signed up for a new account or why they were paying higher fees. 5,300 employees were fired. After the scandal broke and was investigated by a Senate Committee the bank agreed to pay $5 million in customer refunds, $185 million in fines and work on changing their banking practices.

Note that those 5,300 front line workers weren’t fired this month, but over the course of several years, which means that “ghost accounts” were a long term known issue at the bank. In fact, the Los Angeles City Attorney’s office sued Wells Fargo over the practice in May 2015 and the practice has been public knowledge since a 2013 expose of the bank’s retail sales culture. Many critics of the bank pointed out that Wells Fargo only moved to launch an internal review after the scheme became a public relations disaster, and that laying the blame only on front line workers who were under tremendous pressure to sell would do little to prevent future scams.

Now Wells Fargo is hoping to change the conversation. CEO John Stumpf will forfeit $41 million in unvested equity awards and Carrie Tolstedt, former head of the bank’s community banking division, will forfeit $19 million. The move may assure some customers that executives are finally taking responsibility for their part in the scandal.

But WSJ pointed out that the announcement comes just one day ahead of Thursday’s meeting of the House Financial Services Committee, which has been looking into the “ghost account” scandal. Executive compensation became an issue in recent hearings — the lack of action on that front, combined with Wells Fargo’s slow-moving internal investigation into how they can improve banking practices, moved some members of the Committee to scold Stumpf. Last week Senator Elizabeth Warren quoted the bank’s Vision and Values statement — “we believe in values lived, not phrases memorized” — to indict Strumpf’s lack of leadership, and told the CEO that he should resign. She asked him point blank, “what have you actually done to hold yourself accountable?”

.@SenWarren #WellsFargo CEO: "You should resign. You should give back the money that you took…" pic.twitter.com/aPZViWGJIN

Committee member Senator Sherrod Brown told WSJ that the ” announcement is a step in the right direction but there are still dozens of unanswered questions,” which is, let’s face it, putting it mildly.

In her remarks last week in Committee, Senator Warren likened the “ghost account” scandal to the 2008 stock market crash, pointing out that executives are rarely penalized financially in cases like these, and indeed, the Wells Fargo clawback is unprecedented. Alan Pyke, Deputy Economic Policy Editor at Think Progress pointed out that “clawbacks have never been used on a banking executive before, although JP Morgan head Jamie Dimon did see a big one-year pay cut after the “London Whale” fiasco. The junior employees involved in that scandal were subject to clawbacks, but Stumpf and Tolstedt’s portfolio losses are without true precedent.”

Do the Clawbacks Mean Change Is Coming?

Warren’s remarks made a splash on social media and were covered widely in the media and it may well be that they were at turning point in the company’s handling of the scandal. Wall Street and big banks remain a hot button issue for Americans, many of whom believe they still haven’t paid for their part in the 2008 crash. Warren closed her remarks by saying that “the only way Wall Street will change is if executives face jail time when they preside over massive frauds … until then it will be business as usual. And at giant banks like Wells Fargo that seems to mean cheating as many customers and investors and employees as they possibly can.” Watching your brand become synonymous with corruption and exploitation, particularly in an election year that has put Wall Street’s profits and practices front of mind for all of us, is the last thing Wells Fargo or any organization wants.

But are the Wells Fargo clawbacks a sign that the bank understands how company culture and executive decision-making contributed to the ghost account scandal? Pyke says that “clawbacks are a post-facto make-good measure. Wells Fargo’s sins were first exposed three years ago by reporters. Justice, if clawbacks can be said to constitute it, has been excruciatingly slow here.”  have to do.” I think that Pyke, Warren and other critics are right to point out that 3 years is a long time for a company to react to such a huge scandal, and far too long for a company to make substantive changes to its sales policies. 5,300 retail employees were fired over the course of several years for scamming their customers, yet during that period Wells Fargo made no changes to its training practices, sales policies or internal accountabilities. Executives, meanwhile, continued to tout the bank’s share price.

This is not just a case of fat cat Wall Street bankers doing bad, though. This latest turn in the Wells Fargo scandal should be a lesson to all of us in how important it is to match PR to HR, actions to stated values. When a scandal of this magnitude breaks, people want to see concrete signs of accountability and change, not just hear token apologies. There’s no telling yet if clawing back executive bonuses will be enough to turn the tide of public opinion or make an impression on the Senate Committee. More importantly, we don’t know yet what this isolated action means for Wells Fargo’s internal practices. Here’s hoping its a sign of real and substantive change.