VR Dominated ComiCon, Is the Workplace Next? 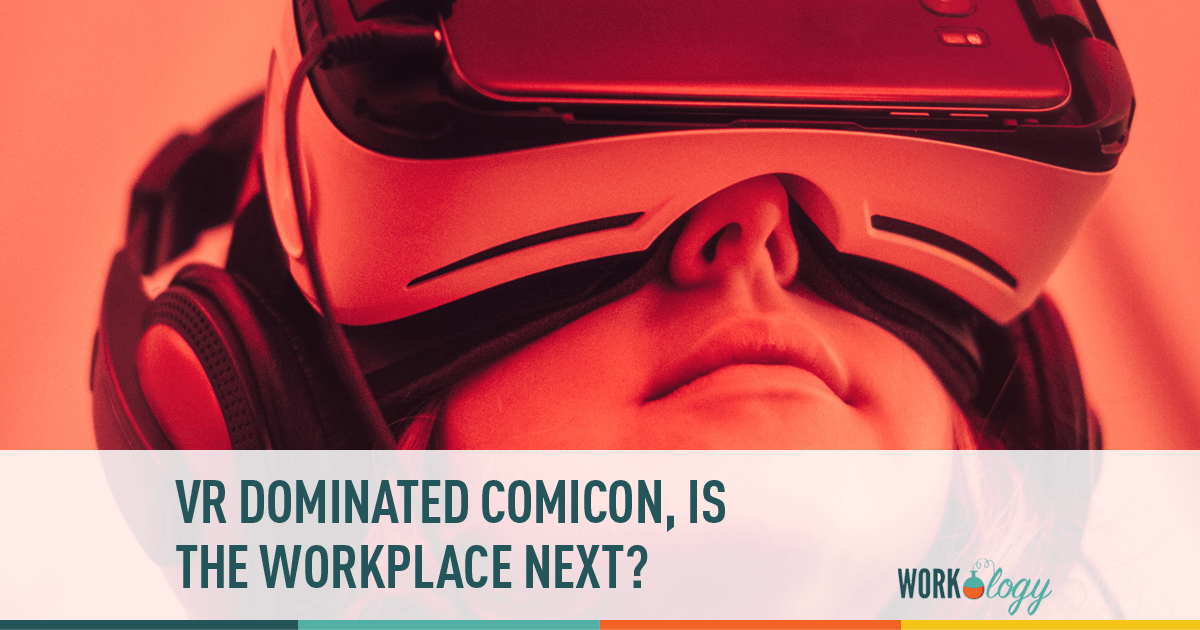 Monday night I stumbled out of Toronto’s Pearson Airport, making my shambling way home after five days of interviews, previews, FunkoPop Toys and cosplay at San Diego ComiCon. Although I attended as press and took advantage of the press room and some secret shortcuts through the con, I’m just as exhausted as every other geek who made a pilgrimage to the world’s largest fan gathering (this year’s estimates put attendance at 130,000). Although it will probably take me a few days to sort through everything I learned and experienced, a few things have been kind of percolating since day one of the convention — and one of them is the huge presence of VR.

As with any trade show, festival or other big event, during the lead up press is bombarded daily with dozens of emails about events and opportunities in and around the event. Each day brings new interview opportunities, party invites, photo ops, and related events. This year, the grounds surrounding the San Diego Convention Centre were taken over by various VR experiences. There was a Teen Wolf VR game. A Walking Dead VR game. A Mr. Robot VR “experience.” VR was everywhere. But for all its dominance, was anyone actually playing these VR games? Bryan Bishop at The Verge says that while people were playing the games and eagerly standing in lines for these interactive experiences, fans didn’t care about the tech. They weren’t interested in the VR — they were interested in the content.

It’s the Pokemon and the People

Over the last few years pundits have been insisting that VR is the next big thing in entertainment and in the business world, but so far we’ve seen little evidence of VR really catching on. Google Glass had a brief swell of popularity, Pokemon Go is the most downloaded iPhone app in history, and more and more events come bundled with one or another kind of VR experience — and yet augmented reality games as a category haven’t yet hit a critical mass of interest from the public, and VR advocates have yet to convince business leaders that what they offer is really necessary. Yes, VR took over ComiCon and Pokemon Go has us combing the outdoors for Squirtles and Pikachus but do these cases prove the value of the technology or the value of the content?

Bishop interviewed a number of players at SDCC’s various VR games and most said they were less interested in the technology or even the VR experience than they were in the content; in getting closer to a franchise they already love. Similarly, while many Pokemon Go players are excited about the game’s ability to get kids and adults outside , they are more into the game itself than they are its mechanics, or even the idea of similar games. Others were more excited about the communal aspect of it; the game acting as a prop to meet new people and build connections within their communities. It’s the Pokemon and the people, not the augmented reality that makes Pokemon Go such a hit.

Last year, blogger and futurist, Robert Scoble announced that he was leaving Rackspace to join the VR revolution. Scoble said then that part of the reason for his shift into VR was the excitement people showed at trying VR for the first time. People were and are genuinely moved by their first forays into VR experiences. It’s a rush of something new and exciting, an entirely new way of experiencing a game and your own senses. But yet, does that rush survive past the first experience, to the second, to the third, to the hundredth? Can excitement alone make technology relevant?

Even in his announcement, Scoble pointed to some of the downsides of emerging VR technologies — the biggest of which is that it is an emerging technology and therefore still expensive, buggy and lacking a built in market. When he wrote the post he was still waiting for his Occulus Rift headset to arrive, to finish off the $3000 VR system he’d invested in. At that cost it’s difficult to see how VR can make a serious impact in the consumer or business worlds. Its ubiquity at tech conferences and now consumer conventions (and even art shows!) does little to suggest how such technologies might really be used. Although we’re all considering ways that VR and related technologies might be used, the high cost of these technologies (and the various barriers to entry, including a lack of familiarity) makes them impractical even for large businesses, outside of a promotional tool.

Mike Haberman, writing here on B4J, suggested that the much cheaper Google Cardboard could be used in on boarding. What I think he, and Jessica with her Pokemon Go Happy Hour experiment, get right is scale. Both Mike and Jessica have looked at small ways to incorporate augmented reality into their normal recruiting and HR practice. Using Google Cardboard to onboard or Pokemon Go to recruit are both contained experiments that require little investment, retain some of the excitement of new technologies and new ways of doing things, but come with little risk. They can be scaled up if they work, or abandoned without regret if they don’t. And they’re the kind of experiments that can build familiarity, making business leaders more comfortable with bigger and perhaps more revolutionary experiments down the line.

What Is VR For?

Bishop says that VR was at its best at SDCC when it was used to add depth to existing properties. But just adding more content wasn’t enough — the best VR installations both gave fans more of what they craved, be it Teen Wolf, Walking Dead or Mr. Robot, but also were consistently interesting experiences in and of themselves. That is, they were good content that built on other good content and the supporting technology was smooth enough that the VR experience was seamless, not necessarily calling attention to itself as VR.

The importance of good content is as important in the workplace is just as important as it is in the entertainment world. Incorporating VR and augmented reality into the workplace sounds exciting, of course, but it has to be about more than the VR experience itself — it has to be purposeful, practical and provide a serious return on investment. It must be able to deliver the essential content of the workplace — be it onboarding materials, sales pitches, or some kind of workflow — and then add more. VR installations at trade shows, conferences and conventions make sense, I think. In that context they’re advertising. Something exciting to hopefully get you, the consumer and user, excited about the organizations real products and services.

But when it comes to VR in the workplace, the key is this: What is the business case? What is its real fundamental purpose? And what will be its return on investment?