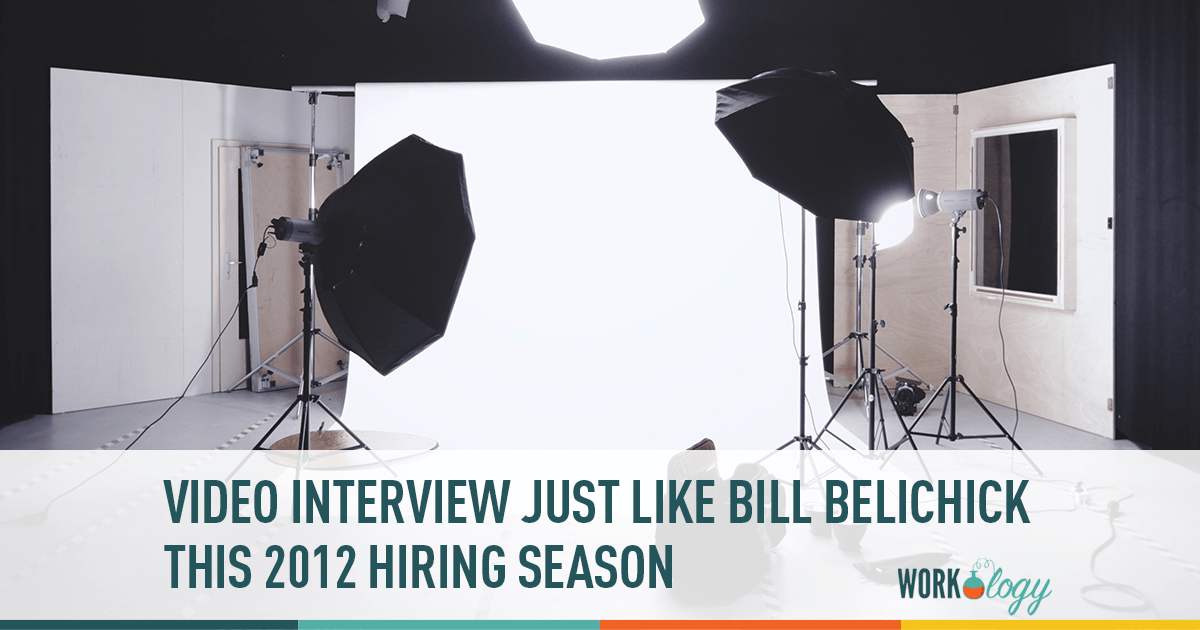 Are you ready for some football this 2012 season? The NFL franchises have already begun passing, running, tackling, kicking, and scoring their way through the preseason in anticipation of the regular season kickoff in early September and the ultimate football goal: the Superbowl. While it may not seem like an NFL team and a video interview have much in common, consider this: Each NFL franchise is allowed 80 players at the beginning of NFL pre-season camp, but only 45 players are permitted to suit up for each franchise every week during the regular season.

NFL coaches like New England Patrio’s head coach, Bill Belichick need to make two sets of crucial cuts before they have their final rosters. The first major cuts narrow teams from 80 players to 65, and the final cuts, which take place before the first week of the regular season, narrow teams from 65 to 53, reserving eight players for the practice squad. Sound a little like first and second round interviews?

In this sense, HR professionals are much like NFL franchise coaches. Using a video interview the next time you interview an up-and-coming rookie is your key to a winning roster. Here are a few traits to look for in candidates when deciding which applicants to select and which will not be making the cut.

A recent study conducted by Stanford and Harvard scholars and published on The Wall Street Journal indicated that people get more excited about potential performance than proven performance, much like how NFL football fans are more excited to see rookies play than say a five-year veteran with impressive stats. In a video interviews, HR professionals can spot a job candidate with high potential performance if the candidate focuses his answers more on what he can do as a player on your company’s roster rather than what he has done with a previous franchise.

You may be asking yourself, “How can a video interview determine a job candidate’s social skills? It’s not a group video interview.” An NFL franchise coach has the upper-hand over HR professionals in this sense because he can examine a player’s social interactions with his teammates, determining if he plays well with others and has the potential for future leadership. But that doesn’t mean a video interview can’t help HR professionals predict a job candidate’s social skills. Video interview questions and the confidence and the volume with which the job candidate speaks and subtle body language clues like maintaining eye contact and leaning toward the camera are good indicators that the job candidate will interact well with those already on your workplace roster.

In an NFL franchise especially this 2012 football season, players need to not only listen to their coaches for play-by-play strategies, they also need to listen to coaches’ critiques and suggestions for better future performance. NFL players who possess coachability are likely to sign multi-year contracts with the same franchise, where players who lack coachability discipline are likely to be cut loose. Coachability is a talent HR professionals can easily recognize in a job candidate during a video interview. In the interview, ask your job candidates about their opinion on company hierarchy. Does he see the value and necessity of answering to a higher authority?  Does he understand the strategy behind who your company has in charge of the entire roster? Also, ask about lessons learned from previous failures. If they are having trouble identifying what they may have learned, they likely will not as coachable when it comes to implementing new strategies.

These are just a few traits look for in candidates when deciding which applicants to select and which to cut in a video interview.

How else can you make the best cuts when it comes to narrowing down your interview roster? Share in the comments below.