The Real Value of Video Calling for Virtual Meetings 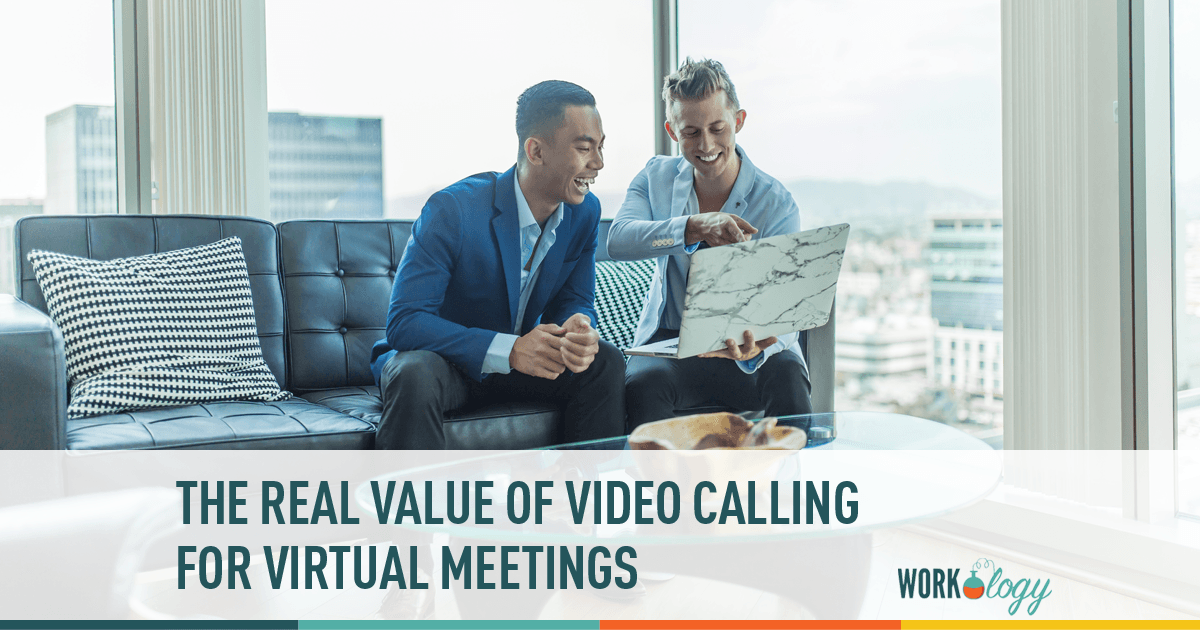 The modern world loves video. Netflix and YouTube make up a half of North America’s traffic on the Internet. Twitter, Facebook, and other social media have their own video apps. We love a lot of TV commercials, but only if we can see them online without interrupting our TV programs. But we don’t love videophone calls.  Movies and TV shows for several decades have shown people making telephone calls with the screen where they can see each other. In real life, though we still don’t use our cell phones very much to make either personal or business video calls.

The trouble with video calling

When AT&T introduced its picture phone back in the 1960s, its service was very expensive. Not many people adopted it–mostly because not many other people adopted it.  It is only since the introduction of 3G technologies that reliable video calling became available for a reasonable price. Even so, there has been a wide and frustrating gulf between what is conceptually possible and the service people actually receive.

The biggest barrier to video calling is not technical, however, but psychological. A phone call is much more impersonal than a face-to-face conversation. For that reason, it seems emotionally safer. The technological barrier that the telephone erects between two people easily allows them to avoid opening up completely. They can be more guarded. Despite the amount of personal data or often-foolish webcam recordings that some people post on social media, we value our privacy. And many people feel, rightly or wrongly, that having too many cameras threatens that privacy.

There is something about looking at a camera lens that is inherently more awkward than looking someone in the eye. For the foreseeable future most people will probably want to carry on video conversations only with people they are already comfortable with. Therefore, regardless of how good the technology gets, people will probably prefer voice-only calls to video calls.

The benefits of video calling

Sometimes though, video calling just makes sense, especially for business. When you’re in business you need to communicate with colleagues, customers, and vendors. Nowadays when the people you need to talk to are across the country or even across the world, travel is expensive. Meetings are expensive. They can require not only travel, but hotel bills, meals out, entertainment, and brochures and other sales literature. Not to mention the time everyone has to spend away from work.

Anyone who is ever been involved conference call knows what pain they can be. Conference calls can be productive, but they can also be very boring. One danger of conference calls is that some participants might be tempted to do all kinds of things besides pay attention to the call.

Much of human communication is nonverbal. On the telephone, facial expression and body language are lost completely. Even tone of voice doesn’t always come through well if the phone connection isn’t good. And conference calls are not conducive to collaborative work on documents, spreadsheets, or presentations.

It used to be that video conferences required special software and hardware, along with a team of people in every location who knew how to keep it running. Nowadays with cloud computing all you need is an app on everyone’s computer, tablet, or mobile phone. All of the difficult hardware and software are located on someone else’s server.

You can easily set up a videoconference with free services like Skype or Google Hangouts. Free services have their limitations though. Many people complain about the quality of connection using Google products, but Google Hangouts offers the ability to include up to nine people in a video conversation. it works on the web as well as on Apple and Android mobile operating systems. Skype operates on all of the major desktop and mobile operating systems, plus BlackBerry, PlayStation, and Xbox One, but it’s only free for conversations between two people. Skype offers a number of different user interfaces, but they don’t all have the same look and feel. Other free services operate have their own limitations, including possibly making you watch advertisements unless you pay a premium.

If you don’t plan to use videoconferences very often, or if your needs are fairly simple and predictable, shop around and choose a free system. Some of them also offer additional features for a small monthly subscription fee. But you get what you pay for.

If your company is going to be a heavy user of videoconferencing, or if you need more sophisticated features and capabilities, you’re better off using a fee-based service provider. Companies like Blue Jeans offer free video conferencing for a trial period. They will provide not only technical support and expertise, but also high definition video and clear audio, with no limitation on the number of participants.

Video calling may never become as popular as other kinds of video. Nevertheless, it is a useful technology, and you have a lot of choices of how to take advantage of it.

Spencer Josan is a ghost writer, curator, literature geek and author. She has several journals, articles and papers to her name. Writing is her passion. She writes about mostly all genres. She resides in Hoboken, Hudson County in New Jersey.