Urban Outfitters Will Keep Asking Employees to Work for Free 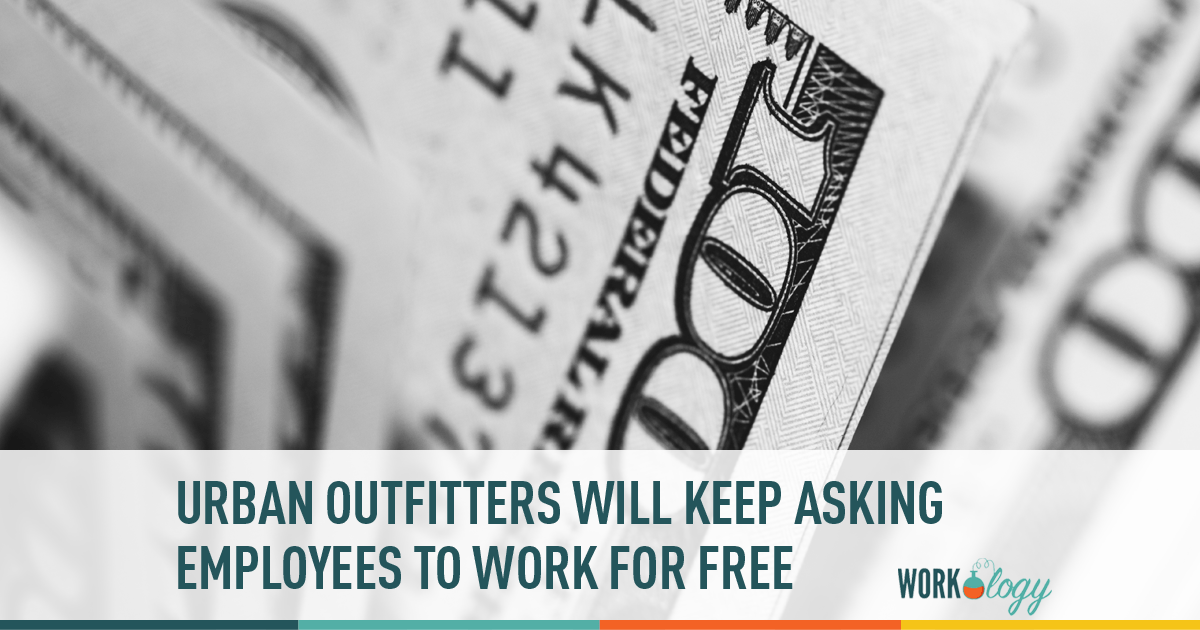 Last week Gawker shared an email sent from URBN to its Urban Outfitters home office employees. The email encouraged salaried workers to take advantage of the opportunity that the holiday shopping season provided: a chance to work weekends in Urban Outfitters fulfillment centres, learning about this important side of the business and, if you came in a group, doing valuable team building work. Of course, this was a volunteer opportunity, and on weekends, after employees had completed their regular 40 hour work week.

Naturally, many Gawker readers were shocked appalled and shared the story with friends who were also shocked and appalled. Urban Outfitters responded by… shrugging. URBN, parent company of Urban Outfitters, Anthropologie and Free People, sent this statement to Gawker:

“After successfully opening our new fulfillment center in June, we asked salaried employees at our home office to volunteer for shifts that would help support the new center through a busy month of October. Unsurprisingly, we received a tremendous response, including many of our senior management. Many hourly employees also offered to pitch in – an offer which we appreciated, but declined in order to ensure full compliance with all applicable labor laws and regulations. The dedication and commitment of URBN employees are second to none, and their response to this request is a testament to their solidarity and continued success.”

Meanwhile, in other Urban Outfitters news, after criticism over its controversial on call scheduling reached fever pitch, the company responded by ending the practice… in New York state. On call scheduling applies to part time non-salaried and requires workers to be available for as many as 20 hours a week, with no guarantee of shifts — they may be cancelled or added without notice. It was once a common retail scheduling practice, but it’s increasingly common for retailers to employ availability agreements instead, which allow for more flexibility for workers, and the ability to refuse call in shifts within their availability.

URBN doesn’t care about your upset. They’re betting that the public’s commitment to fair wages and treatment for all is vastly outweighed by our commitment to cheap music festival outfits and overpriced kitschy housewares. They’re also betting on legislatures and the judiciary taking their side, should URBN workers ever level a dispute. And broadly speaking, those are smart bets. Offering volunteer weekend work to salaried employees isn’t illegal or discouraged. And in many districts, neither is on call scheduling. Anti-labour sentiment continues to be strong, despite murky job prospects for low wage workers, and the labour movement has had trouble connecting with the public.

Sure, we get upset at seemingly outlandish and unfair employment practices at our favourite brands, but will we be so annoyed to skip over URBN stores during the holiday season? Sales forecasts are strong, and although the company’s growth has been slowing, Forbes has been advising us to invest in Urban Outfitters for months. And did you hear? Chefs are opening chic cafes in Urban Outfitters stores. This is not an organization in retreat.

Moreover, these are common practices in retail. Salaried managers are expected to be on call in case of emergencies, to work long hours, and to give up days off during the holidays. Home office employees often help out in problem stores, coming in for inventory, or holiday prep and recovery, as a demonstration of solidarity. Clock watching is discouraged and may lead to unfavourable reviews and missed promotions. Part time employees are encouraged to open their availabilities and be aware of the needs of the business. Anyone who’s worked in a corporate retail environment, either at store or home office level, has stories about how high the pressure can be for salaried and non-salaried workers alike.

Retail is a tough business for companies and employees alike, and that’s why we’re hearing and more and more discussion about retail unions. Many retailers rely on a core-periphery labour strategy, where a small core group of employees have a stable schedule and a much larger group of employees is on call. This peripheral group is in constant turnover, making it hard to form unions. And while the core-periphery model allows for increased scheduling flexibility, and therefore, an organization’s ability to manage costs, it cuts into skills building, which affects quality of service.

But lest you think that unhappy workers and weird schedules are the cost of doing business, some companies, even with the unique challenges of retail manage to make Best Ofs year after year. URBN is not one of them.
Will this scandal convince URBN to change things up? Happy employees do provide better service, but that hasn’t been incentive enough for URBN to rethink their labour practices in the past — only “encouragement” from the New York Attorney General has made an impact. Urban Outfitters will continue to ask employees to work for free. They’ll do it knowing they aren’t the only ones, and knowing that their labour record is unlikely to make an impression on shoppers, let alone dissuade them.