How Unions Are Skewing FLSA Changes with Organizing Campaigns 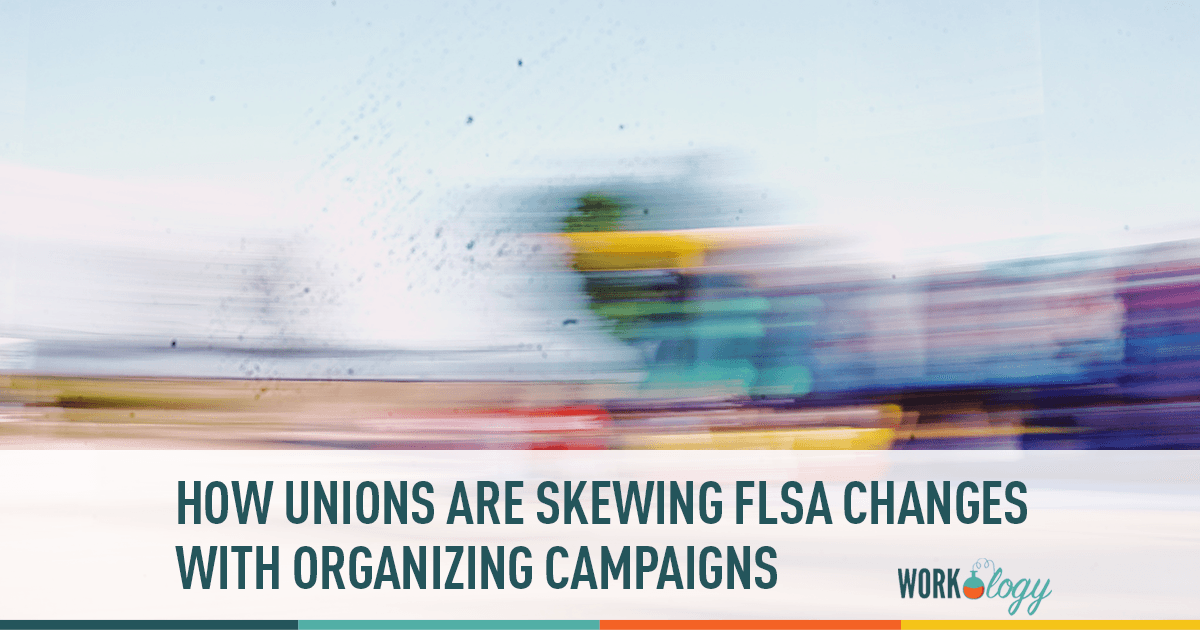 Last month the comment period regarding the proposed changes to the Fair Labor Standards Act closed. Maybe you breathed a sigh of relief knowing that you have a few months reprieve before the official changes are announced in 2016. Trust me when I say it’s just the calm before the storm. We need to be thinking about our company FLSA employee communication strategy.

I’m not talking about a simple employee memo or standard paycheck attachment. A change like this warrants a strategic marketing and employee communication strategy.

In June of this year, proposed changes to the Fair Labor Standards Act were announced. At the heart of the update is an increase in the minimum salary increase for exempt level workers from $23,660 to $50,440 as well as the definition of what constitutes an employee, specifically someone who has the role of managers, who therefore, qualifies to receive exempt level pay. This one update to the FLSA will forever change overtime laws and $2 billion worth of employee compensation not to mention the impact of overtime.

A change like this is massive and we know how employees often react to large organization change. It doesn’t always go well which is why employers and HR leaders should be talking, communicating and sharing resources with their employees today. Overtime laws and exempt level time off are already one of the most popular topics on Blogging4Jobs from employees. There are so many questions around exempt time off, FLSA and vacation time already.

Employees have access to resources online in greater numbers than ever before. Everyone is a publisher, myself included and especially union organizations who are looking to take advantage of workplace uncertainty.

A recent change by the NLRB is one that is especially cause for concern for employers and that is micro-organizing. Essentially, small pockets or groups of employees can sign cards and opt to vote to become union represented. To be considered a unit, the co-workers must be a part of a single, functionally-integrated production process. For example, these employees can be within a big box retailer like Target as members of the pharmacy team. In September of this year, pharmacists and pharmacy technicians at a Target store in Brooklyn, New York, voted 7-2 to form the microunion —the first since Target’s inception in 1902. This micro unit was a total of 9 employees. Micro unions combined with major employment law changes breed uncertainty and drive interest in union organizing.

And the unions have already began their employee campaigns. Below, is a screenshot of a union text message I received encouraging subscribers to share their opinions on the proposed changes to overtime. I subscribe to a handful of union text message platforms. They distribute information and encourage subscribers to act while also collecting zip code and email address information to drive local and customized campaigns.

As business leaders we have our hands full already with employees who infer about organizational changes and use their creative imaginations to fuel the workplace grapevine. Add in social media, traditional media and unions into the mix and you have the perfect viral storm. We need to get ahead of this information hurricane and start educating, communicating and most importantly marketing about how these changes will impact employees. Otherwise, the media and other outlets will be spinning and doing our own storytelling.