Union Mentality: A Culture of Mediocrity 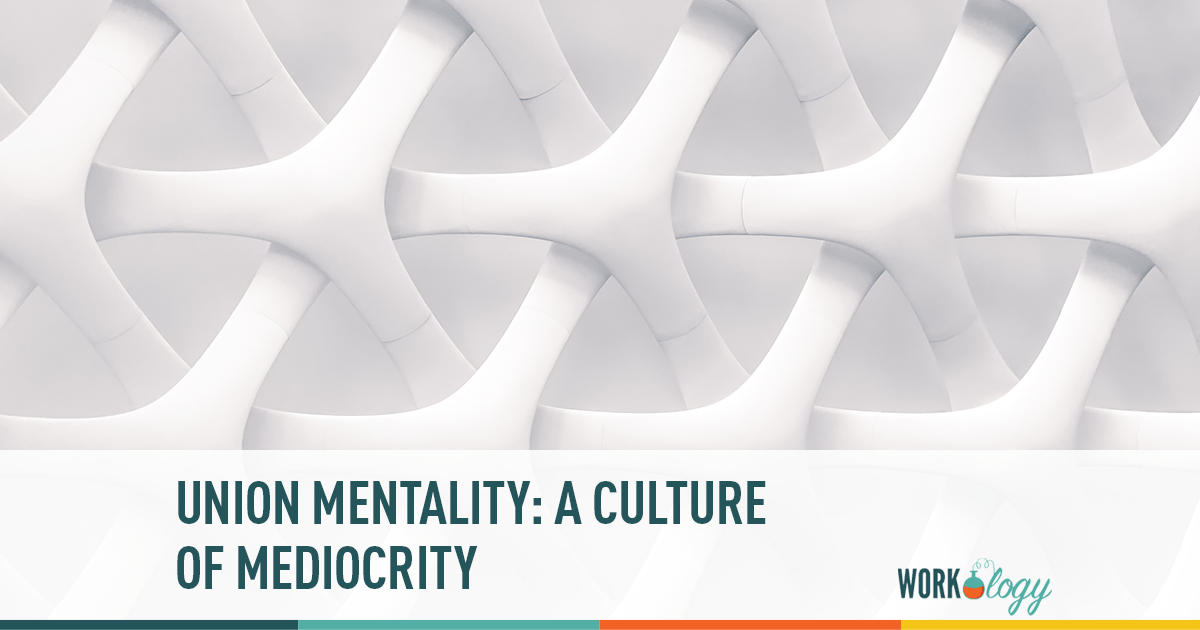 Excuse me for my title. I’m sure it will offend at least one person, but I am not concerned because those of us who have worked in unionized environments know the deal. There is an aura, a way and even a stench that permeates from union environments. Although collective bargaining agreements vary from union to union most of them get manipulated and stretched into rainbow area where very few performance issues matter and being terminated is damn near impossible.

Union Mentality: A Culture of Mediocrity

Don’t get me wrong, I appreciate the intention of the labor movement. Thinking about the 146 people that died tragically in the 1911 Triangle Shirtwaist Fire in Greenwich Village, NY still gives me chills. What I question is how the labor movement evolved from one that protects worker’s rights and safety on job; to aiding and abetting a culture of mediocrity in the organizations they serve. There are some really good people who are union members. However, there are just as many others who have a sense of entitlement and saunter through their careers hanging on the every word of their changing bargaining agreements and giving their employers hell every step of the way.

The true travesty in all of this is the reluctance on the part of the employer to manage their union workforce accordingly. In the organizations, I have worked for management was fearful of the union- especially the bigger unions. It is not only a mistake to fear the unions in your organization- it completely undermines the efforts of your non-union employees who have to wake up to a culture of mediocrity on one side of the house and a culture of excellence where they sit.

When I worked in healthcare, I was responsible for dealing with one of the largest unions in NY. The practitioners and professionals that were a part of this union barely got a cent worth of their dues. Why you ask? The organization feared the union. Employees that were poor performers were not written up and progressively disciplined. Instead, line managers opted to forego progressive discipline and let the poor performer be, because members of this union couldn’t transfer for one year once written up.

This caused the organization to retain an inordinate number of people who were being shuffled around the organization by seniority bids, because management had decided it was easier to pass the problems around to their peers. Too often, I would have to deliver the news to both new and tenured managers that they were receiving Jane or John Doe from this unit for their position – to which I would get: “I am going to fight this I know this person’s performance and I don’t want them working here.” I used to say: “Rock on Baby Bubba!” I completely understood and felt their pain.

In time, I too became disgusted with the culture of mediocrity that was brewing in this organization. I questioned how we could be dedicated to superior patient care when our bench strength in our union facilities was poor? To make matters worse, quite a few Labor Relations Managers in HR became crooks themselves working with union delegates to move people into positions they didn’t deserve.

While I recognize that this reality may not be yours, it is the reality of labor in the past 10 years. I know because I have vetted my experience with other HR professionals and leaders that have dealt with unions. If this sounds like your company, I sympathize with you. The key point here is: whether you are union or not the organizational goal should be the same. There can’t be one group working hard because they know their jobs depend on it- while the other side of house is milking the vague and nuanced language of their collective bargaining agreements to do the least. This approach not only undermines the initial intention of the labor movement, but it disgraces it.