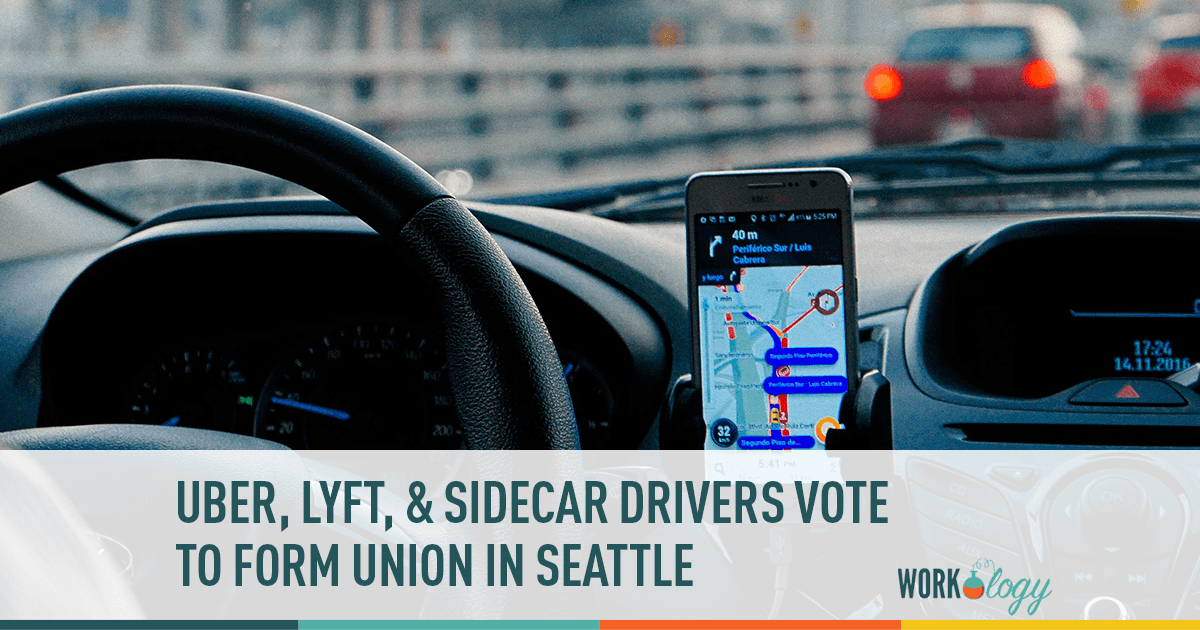 Learn how Blogging4Jobs is partnering with Uber to save you money off your first ride!

Seattle based drivers for transportation companies who use apps to schedule passenger pick-up have voted to form an association which will assist in them in work related discussions with companies like Uber, Lyft and Sidecar.

The Seattle Times is reporting that about 200 drivers with assistance from the Teamsters union have voted to form an association called the App Based Driver Association. See below:

That’s why about 200 of them gathered in Tukwila Sunday to formally coalesce as an association. The App-Based Drivers Association elected its first leadership council and established bylaws for about 500 drivers who expressed interest in joining. The association is made up of drivers for so-called rideshare services — legally referred to as Transportation Network Companies (TNCs) — and luxury ride services such as UberBLACK and UberSUV.

In addition to anxiously waiting to see how the City of Seattle would regulate TNCs, app-based drivers have dealt with Uber, Lyft and Sidecar changing their business models in preparation for those regulations.

That’s made it difficult for them to know whether investing in their cars and the job as a full-time gig is worth it, said UberBLACK driver Daniel Ajema, 34. Ajema, along with others, spent the last year trying to pull together drivers from different apps.

Contract drivers — who sometimes invest tens of thousands of dollars into cars, commercial insurance and licensing — should have more of a say in how the companies operate, he said.

“We’re a significant part of their moneymaking, but we don’t have a seat at the table,” said Ajema, who’s driven for Uber for two years while attending Seattle University’s law school. “We also want to make sure that there is a fair firing process.”

The association and its advocating organization, Teamsters Local Union 117, have said that Uber in particular has bumped drivers off without a fair firing process.

The Teamsters union represents traditional taxi drivers in many cities, and has grown increasingly concerned with the advent of the app driven transportation model.  Taxi drivers in some cities have conducted one day work stoppages, calling on local politicians to regulate companies like Lyft and Uber. In London, black cabs have promised to bring “chaos, congestion and confusion” to London as a protest against the growing presence of smartphone taxi service Uber.

Uber responded with an official statement: (via Geekwire)

Uber is a technology platform and we partner with thousands of small businesses in the Seattle area. Owners of these small businesses are free to exercise their rights under federal and local law, meet with each other and to provide Uber with feedback about their partnership. In fact, we encourage this feedback; we hold weekly coffees that all partners are invited to, offer support via email and text message 7 days a week, have open office hours throughout the week, and also have an anonymous feedback form.

A partner that is a safe driver, with a consistently clean criminal and driving record, who provides good customer service and keeps their small business in order is at no risk of Uber’s partnership ending. Safety and service are Uber’s top priorities.

Here is a list of links to more news related to this latest technology driven labor dispute: