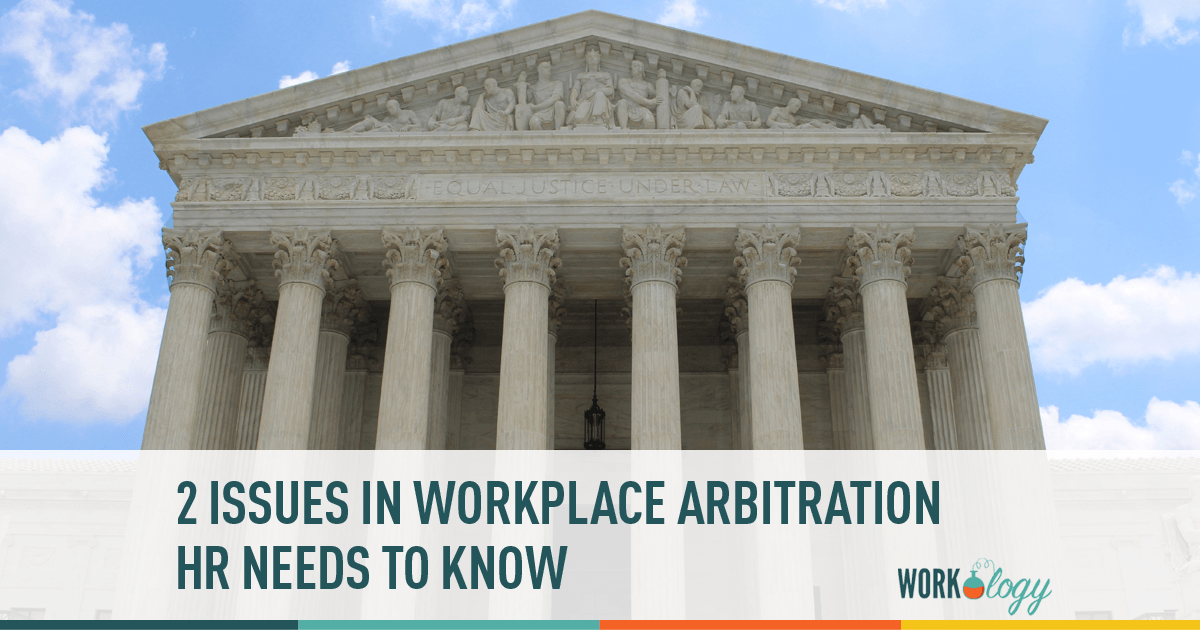 Class action arbitration has been in the news the last week with the Supreme Court of the United States (SCOTUS) weighing in and rendering a decision that has implications for employers. So here are two issues in arbitration agreements HR needs to know about.

The actual case that was reviewed had nothing to do with employers, but according to many attorneys the decision has implications for employers. The case actually had to do with merchants bringing class action suits against American Express and Amex saying that the agreement signed by the merchants prohibited class actions because of a waiver that had been signed. I am not going to get into the ins and outs of the case. If you are interested you can read Supreme Court Upholds Class Action Waivers In Arbitration Agreements written by Fisher & Phillips LLP.

The result of the case was that the SCOTUS said that class action or collective action waivers were enforceable if they were clearly stated in the arbitration agreement.

Many employers have arbitration agreements that they have employees sign that require that employees settle any employment dispute they have with their employer through the arbitration process before they pursue other action beyond arbitration. Often this requirement allows employees to be heard, for the two parties to come to a settlement and prevent further legal action. One of the provisions that each of these agreements should have is, according to Fisher & Phillips, and explicit prohibition against class action or collective action. The agreement should specifically have a waiver that employees sign. This recent decision by SCOTUS makes it clear that these are enforceable.

By having this provision employers will have to deal with each dispute individually but will have the opportunity to avoid very large judgments that might result from class action suits. So their advice is to make sure these waivers are included in any arbitration agreement.

There is one wrinkle in this topic however. According to Allen Smith at SHRM the National Labor Relations Board (NLRB) has made the point that prohibiting class or collective actions is a direct violation of Section 7 of the National Labor Relations Act (NLRA). Section 7 explicitly gives employees the right to bargain and to engage in collective action around “wages, hours and working conditions”. Baring a collective action in protest of wages, which might have been prevented by the arbitration agreement, would, in their opinion would be a direct affront to Section 7 rights. That decision made by the NLRB is currently being litigated, so whether this is a violation of Section 7 rights is not yet clear.

So we will have to wait and see on the NLRB, but in the meantime review any arbitration agreement you have employees sign and make sure there is a prohibition against class action suits. It may save you some money.

What’s your opinion on this ruling?